Finding true love is hard for chemists and lefty snails 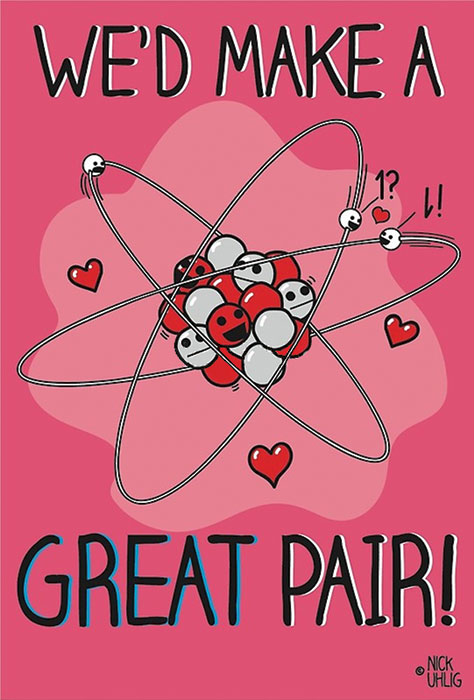 It takes a lot of time and effort to become a chemist. As for finding love, though, that can happen in an instant, like the way a metal ion can suddenly find itself bound to a lovely ligand.

Chemists lucky enough to be in a coordination complex with a sweetheart can commemorate their good fortune on Valentine’s Day thanks to Nick Uhlig. The process chemist celebrates his love of chemistry puns in his third annual set of greeting cards, available at the online store Redbubble.

New this year is “Hey, baby let’s coordinate!,” where the romantic gift of an electron is offered in lieu of, say, flowers or chocolate. For those who feel the strength of their bond may be in question, there’s the plaintive “Don’t break my aromaticity” featuring a tricyclic compound in the shape of a heart.

Uhlig has also branched out from his organic chemistry roots into the biochemical world with the risqué “You’re a freak in the sheets!,” an obvious reference to, um, secondary protein structures.

“I try to get stuff from a bunch of different disciplines—to make ones that only experts can get—but then you have a smaller market,” Uhlig tells Newscripts. In contrast, lovers with a general science background have snapped up a large number of 2017’s “Roses are red, bromothymol is blue ...” featuring a titration resulting in a heart.

Still, as any comedian will tell you, nothing kills a joke like having to explain it. Uhlig says his wife is not a chemist and acknowledges, “It’s all Greek to her.”

So Newscripts wondered if the size of the chemistry Valentine market could be determined. Let’s go to the data, shall we? Members of the American Chemical Society whose significant others are also members can opt to receive just one copy of C&EN. According to ACS Member Services, 586 members—around a paltry 0.4%—take this option. However, that doesn’t count members who opt for the digital edition or couples who can’t sign up because they are buried under a pile of back issues of the print magazine.

Career blogger and C&EN columnist Chemjobber suggests there is indeed a market for romantic chemistry puns. “I have come across plenty of dual-chemist couples,” Chemjobber says, anecdotally. “I think the very nature of graduate school in chemistry, with a median time to degree of five to six years, lends itself to dating your coworkers, however wise or unwise that might be.”

Still, Chemjobber says data from the 2016 Survey of Earned Doctorates show chemists had one of the lower marriage rates for all Ph.D. graduates in 2016. Of the 2,704 Ph.D. chemists who graduated in 2016, about 41% were never married, 36% were married, and 10% were in a “marriage-like relationship.”

One in a million love 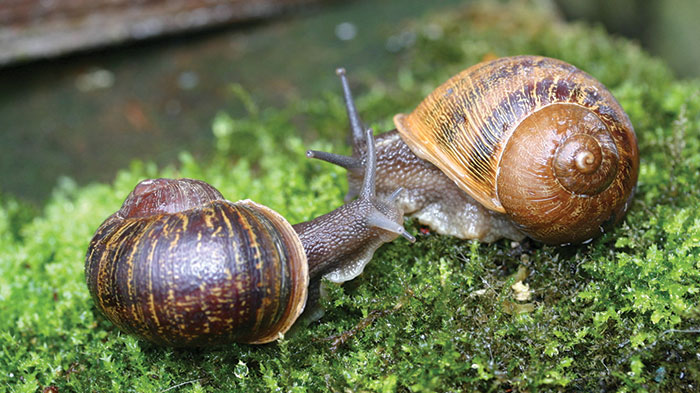 Compared to chemists, snails find it pretty easy to meet a mate; after all, most of them are hermaphrodites, so they can get together with literally any snail. The Newscripts gang also notes approvingly that either member of a pair can produce snail offspring.

But the slime trail of love was quite twisty for a snail named Jeremy, who lived under the care of Angus Davison, professor of evolutionary genetics at the University of Nottingham. Jeremy, who hailed from a London compost heap, was plucked from obscurity because of his left-winding shell. Almost all snails twist right.

Davison wanted to know if the left trait is the result of a sudden mutation or if it is inherited. But Jeremy could mate only with another left-winding snail. In 2016, Davison put out a worldwide call to find a mate for Jeremy and in the process made him an internet sensation (hashtag #snaillove).

On Nottingham’s blog, Davison said he estimates that as many as 1.9 billion people around the world heard about Jeremy. “It is amazing to think that a fairly straightforward idea that I had one afternoon, while wondering what to do with a rare ‘lefty’ snail, could have such a massive worldwide impact—and also to help me communicate my science.”

Happily, before he departed to that great lettuce patch in the sky, Jeremy dated two other lefty snails, called Lefty and Tomeu. Lefty was found by an Ipswich gardener, whereas Tomeu was rescued from a cooking pot in Majorca. Davison says his research continues with Tomeu’s offspring—which are right-winding and now four months old—that resulted from encounters with both Lefty and Jeremy.

Education
New international students cannot enter US for online-only programs
Education
Chemistry-style fun and games
Undergraduate Education
Block plan compresses one class into a few weeks for deeper learning
Share X
To send an e-mail to multiple recipients, separate e-mail addresses with a comma, semicolon, or both.
Title: Finding true love is hard for chemists and lefty snails
Author: Melody M. Bomgardner
Chemical & Engineering News will not share your email address with any other person or company.

Comments
Stanton de Riel (February 14, 2018 8:37 PM)
So -- classical Mendelian genetics suggests that no pairs of Jeremy/Lefty, Jeremy/Tomeu and Lefty/Tomeu had gene-*matching* homozygous recessive traits for left-winding. Looking forward to the F2's! But, could achieve the same speed of results with several generations backcrossing with righties? Wonder if the snails themselves ever muse, "Gee, that was a wind-dinger!"
Reply »