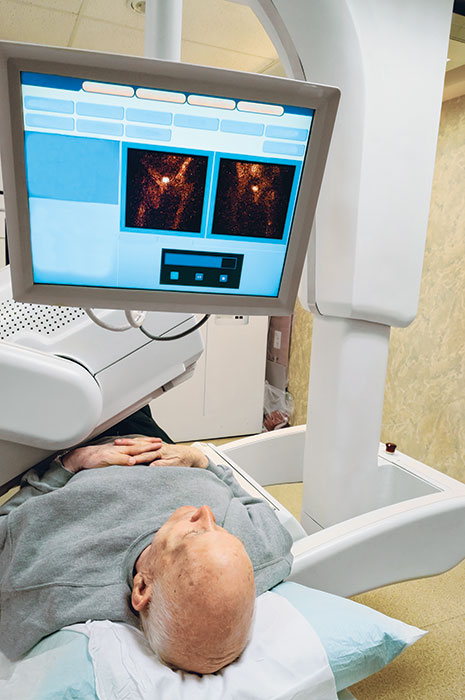 Credit: Shutterstock
Technetium-99 is the most common tracer used in gamma camera scans.

U.S. regulators are giving the green light to a new technology to produce technetium-99m, the most widely used radioisotope for medical imaging, without relying on weapons-grade highly enriched uranium. Earlier this month, FDA approved the RadioGenix System, a product of NorthStar Medical Radioisotopes of Beloit, Wis. The technology involves conversion of molybdenum-98 via neutron bombardment or of 100Mo in a linear accelerator to 99Mo. Next, 99Mo is processed into a form that allows elution of 99mTc, its daughter radionuclide, according to the Nuclear Regulatory Commission. For more than a quarter century, U.S. supplies of 99mTc involved shipping enriched uranium out of the country for irradiation and then importing the resulting 99Mo, FDA Commissioner Scott Gottlieb says. The foreign facilities that performed the irradiation, he says, “were vulnerable to unforeseen shutdowns or closures.” The Nuclear Regulatory Commission is developing guidance for facilities using the RadioGenix system and will license the new technology so the 99mTc it produces may legally be used for medical purposes. 99mTc, which emits gamma rays, is used to detect coronary artery disease and cancer and to evaluate lung, liver, kidney, and brain function, FDA says. In 2016, the National Academy of Sciences warned about the potential for shortages of key medical isotopes derived from enriched uranium.