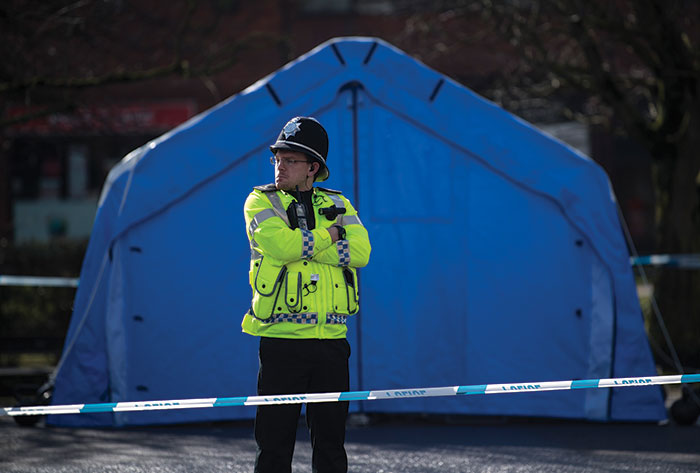 As U.K. police scramble to investigate the attempted murder of a former Russian colonel living in the U.K., details are beginning to emerge about the substance used to poison him and his daughter.

[+]Enlarge
Cyclosarin, sarin, soman, tabun, and VX are the best-known members of a large family of organophosphorus nerve agents.

Cyclosarin, sarin, soman, tabun, and VX are the best-known members of a large family of organophosphorus nerve agents.

Sergei and Yulia Skripal were found unconcious on a bench in Salisbury on Sunday, and are now fighting for their lives in a local hospital. Several police officers who attended to them also became ill; one remains hospitalized, and is in a serious but stable condition.

On Wednesday, investigators revealed that the Skripals had been exposed to a toxic nerve agent. “This is being treated as a major incident, involving attempted murder by administration of a nerve agent,” said Mark Rowley, head of counterterrorism at the Metropolitan Police, in a statement to the media. He added that the pair had been “targeted specifically.”

Sergei Skripal, once a Russian military intelligence officer, was imprisoned by Russia in 2006 after being convicted of passing secrets to the U.K.’s Secret Intelligence Service, MI6. He was released in 2010 as part of a spy swap deal and has lived in the U.K. since then.

Officials in the U.K. have not disclosed the identity of the nerve agent, but toxicologists and chemical weapons experts say that chemical analysis of the compound could hold the key to finding the perpetrators.

So far, all the reported evidence points to an organophosphorus compound as the culprit. For example, the Skripals had symptoms that were consistent with poisoning by one of these agents.

Initial symptoms can include salivation, sweating, breathing difficulties, and a runny nose. The lungs produce mucus, and victims may appear to foam at the mouth. Then their muscles start to twitch before paralysis sets in. People exposed to nerve agents also experience confusion, vomiting, coma, and seizures. In some cases, a mere 10 mg of a nerve agent can poison someone. Higher doses can stop breathing altogether and trigger cardiac arrest.

Doctors typically treat victims of nerve agents with atropine, which blocks the effects of acetylcholine at nerve endings; and pralidoxime, which binds to acetylcholinesterase and displaces any organophosphorus compounds present.

“These nerve agents are typically very difficult to make, except for experienced chemists with a considerable level of safety and handling precautions,” says Chris Morris, a medical toxicologist at Newcastle University.

According to the Organisation for the Prohibition of Chemical Weapons (OPCW), the most common nerve agents used for military purposes are tabun, sarin, soman, cyclosarin, and VX. All are colorless liquids in their pure form, and can be deployed as aerosols that are inhaled by victims. VX, in particular, can also be absorbed through skin.

But sources close to the investigation have already ruled out sarin and VX, according to a report from the BBC. Also, today, U.K. Home Secretary Amber Rudd said that the nerve agent is “very rare.”

“If it were a standard agent, it would have been identified almost immediately,” says Jean Pascal Zanders, an independent consultant who was previously a senior research fellow at the European Union Institute for Security Studies.

Indeed, chemical weapons labs across the world probably synthesized hundreds of organophosphorus agents over the decades, most of which were never selected for military use. “There are organophosphorus compounds that are many, many times more toxic than VX or sarin,” Zanders says.

Investigators at the U.K.’s Defence Science & Technology Laboratory at Porton Down, just 11 km away from Salisbury, are now racing to learn more about the nerve agent. Using techniques such as gas chromatography-mass spectrometry, they will study samples taken from the Skripals, as well as the area where the two were found.

This analysis may reveal trace impurities from the raw materials used to make the nerve agent, says Ralf Trapp, a consultant chemist and toxicologist who previously worked for OPCW. “If you have impurities in the starting materials, some of them will come through to the final material,” he says. Authorities could then compare that chemical profile with reference samples from known chemical weapons laboratories to understand how the nerve agent was synthesized, and perhaps even pinpoint the lab where it was produced.

The fact that the police officers who initially helped the Skripals have also been affected offers more clues. For example, the officers may have touched the Skripals’ clothing or skin, which could have been contaminated with the nerve agent. That may suggest the nerve agent had a relatively low volatility, Morris says.

Organophosphorus agents have typically been used as weapons of war, rather than assassination tools. The Syrian army deployed sarin over the past few years during the country’s civil war, according to OPCW, and the Aum Shinrikyo cult used it in an attack on the Tokyo subway in 1995.

It is too early to know whether that assassination and the Skripal poisoning case signal some technical development that has made organophosphorus compounds easier to use. However, “there may be an organophosphorus agent that is made just before use, by combining two precursor compounds, which react rapidly together to produce the active compound,” Morris says.

The Skripal case has strong echoes of the 2006 murder of Alexander Litvinenko in London. The former Russian secret service agent and defector was poisoned by radioactive polonium-210. A public inquiry in the U.K. concluded that Litvinenko was killed by Russian agents. That finding, rejected by Russia, has stoked diplomatic tensions between the two countries.

Russia has also denied any involvement in poisoning Sergei and Yulia Skripal.

Comments
Jowan Hendra (March 9, 2018 12:27 PM)
In my view it will probably turn out to be a fairly non-volatile compound, maybe one of the relatively rare V-agents. It will be extremely interesting to learn where and by whom it was prepared.
Reply »

Tanya (March 14, 2018 4:26 PM)
Thank you for sticking to the science and not acting like it's been proven that Russia was behind this like the popular press is doing.
Reply »

Dave (March 15, 2018 6:54 PM)
I've been following this story on multiple sites/outlets and it's really been difficult sifting through the rhetoric and hyperbole. This site has been by far the most informative. I will withhold my judgement until the evidence is produced.
Reply »