After a strong decade, chemical industry performance started to slip 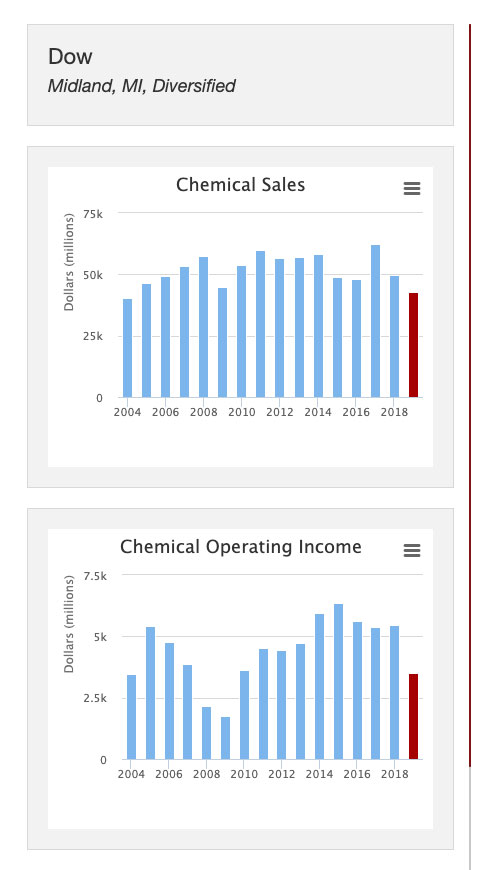 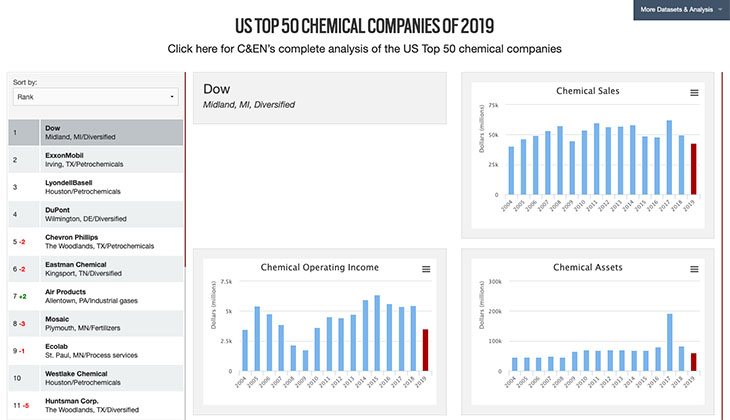 We didn’t realize it at the time, but 2019 will go down—for the chemical industry and beyond—as blissfully untarnished by the novel coronavirus. When the economy starts to grow again after shutdowns are lifted, we will use 2019 as a yardstick to gauge whether it has recovered fully.

According to C&EN’s latest survey of the top 50 US chemical producers, companies were already showing signs of slowing before the pandemic. The 50 companies’ combined chemical sales for 2019—the year that forms the basis for the survey—declined 9.8% from 2018 to $280.2 billion. This is a sharp contrast to the 17.9% sales increase that the largest 50 firms collectively posted in 2018.

According to the American Chemistry Council (ACC), a trade group, chemical industry growth was weak in 2019. US chemical production increased by only 0.6% during the year. Global growth was just slightly better at 1.2%.

Prices could explain the industry decline. Dow, which heads C&EN’s ranking and saw a 13.4% decline in chemical sales last year, reported that selling prices for its products declined by 11.0%.

Meanwhile, oil prices increased throughout the year, starting at about $45 per barrel and finishing at just over $60. Oil and natural gas are major cost inputs for the chemical industry. Increasing energy prices plus declining chemical prices are bound to equal shrinking profits.

And according to C&EN’s data, profits did indeed decline. The 44 firms among the top 50 that publicly report profits posted combined operating income of $28.6 billion for the year, a decrease of 26.3%. Last year’s survey found a 19.5% increase in profits.

The chemical industry’s fortunes for 2020 will depend almost entirely on the course of the coronavirus pandemic.

Last month, the ACC revised its 2020 economic forecast, estimating a 3.3% drop in US chemical volumes for the year. In December, before COVID-19—the disease caused by the new virus—emerged as a factor, the trade group had predicted a modest increase in volumes of 0.4%.

“Industrial activity started the year on a weak note even before news of COVID-19 emerged in late January,” Martha Moore, senior director of policy analysis and economics, writes in the ACC’s update. “Then supply disruptions from China began to percolate through the U.S. industrial sector.”

With everybody but essential workers staying home and not driving, oil prices have been crushed. Oil prices started the year at about $60; by April, futures prices—prices for oil contracts that expire on a certain date—reached never-seen-before negative territory. There was so much excess oil in the system that buyers had no place to put it all. Prices have recovered somewhat since then and were above $10 by the end of April.

Lower oil prices can be bad for US chemical makers versus their foreign counterparts. They primarily use natural gas–derived feedstocks and need a cost advantage over oil-dependent chemical makers from overseas to compete in the export market. Natural gas prices declined by 15% so far in 2020, not nearly as much as oil.

The effects of COVID-19 will be uneven across the chemical industry. Companies like Ecolab that have large oil-field chemical businesses will feel the pain from a standstill in drilling activity. And lower oil prices will be a challenge to natural gas–based petrochemical and fertilizer makers. On the other hand, such firms make products that go into food and food packaging, which are proving more insulated to the effects of the pandemic. Industrial gas firms are selling more oxygen to hospitals, and companies like DuPont have products that go into personal protective equipment.

DuPont and Dow are the top spenders on R&D among US chemical firms.

Note: Figures are for companies on the top 50 list reporting capital and/or R&D expenditures. n/a means not available.

Dow and DuPont, the reboot

Last year, DowDuPont split into three separate companies, all of which rank near the top of this year’s top 50 survey.

The independent Dow leads the ranking with $43.0 billion in sales. It has a sharper focus on petrochemicals than it had before the merger with DuPont in 2017. Two of the company’s main orders of business are ramping up production at its massive Sadara Chemical joint venture with Saudi Aramco in Saudi Arabia and completing incremental expansion projects. These include installing ethylene furnaces at its flagship facility in Freeport, Texas.

DuPont, number 4 in the ranking with $21.5 billion in sales, has been doing more corporate heavy lifting and appears to be contemplating additional transactions that could lead to new members of the US Top 50.

Already, DuPont has agreed to merge one of its major divisions, Nutrition & Biosciences, with International Flavors & Fragrances. The division generates about $6.8 billion in annual sales and will double the size of IFF. DuPont is said to be also considering a transaction for its electronic materials unit.

Corteva Agriscience, which combines the agricultural chemical and seed businesses of Dow and DuPont, debuts in the ranking with $6.3 billion in sales. The company has been making modest investments. For example, it is spending $145 million to expand output of the biological insecticides spinetoram and spinosad. 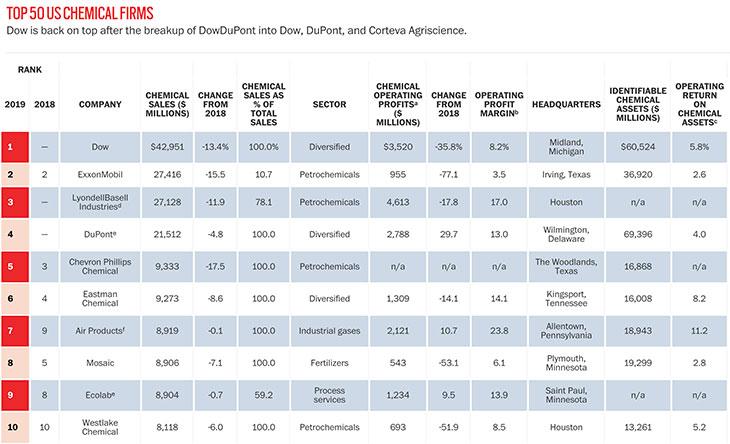 This year’s US Top 50 list has more additions than just Dow, DuPont, and Corteva. In a change, C&EN has decided to include companies that have their principal executive offices in the US even though they might be legally domiciled overseas.

In this spirit, LyondellBasell Industries and the carbon black producer Orion Engineered Carbons, both based in Houston, now appear in the ranking, at numbers 3 and 37, respectively. The titanium dioxide supplier Tronox, with main offices in Stamford, Connecticut, debuts at number 26.

In addition to DowDuPont, five other companies have departed from the ranking. Silicone maker Momentive was purchased by a South Korean consortium. Praxair merged with Linde. Three firms—Omnova Solutions, Cambrex, and Goodyear Tire & Rubber—didn’t have enough sales to make the cut this year.

Credit: LyondellBasell
LyondellBasell Industries has delayed construction on a propylene oxide plant it is building in Texas.

Acquisitions helped ratchet Linde and Bayer higher in the ranking.

Note: Figures from companies that report in native currencies were converted to US dollars at average annual exchange rates from the Federal Reserve.
a Sales include a significant amount of nonchemical products.
b Fiscal year ended March 31, 2019.
c Fiscal year ended June 30, 2019.

The foreign ranking didn’t see as many changes as the US one. It lost LyondellBasell when the firm moved to the US list. Finnish specialty chemical maker Kemira slipped in at the bottom.

A couple of companies moved up the foreign ranking because of big deals. Linde climbed to the third slot after it merged with industrial gas rival Praxair. And Bayer made a strong move from seventh to fourth because of its 2018 purchase of the agrochemical maker Monsanto.

This year, C&EN has introduced an R&D and capital spending table to the US Top 50 feature in place of a survey of company market capitalization. R&D spending for the 29 companies that report such outlays hit a combined $3.6 billion, a decrease of 5.1% from 2018.

The two biggest spenders, DuPont and Dow, posted declines in their R&D budgets, which helped bring down the total. Both companies split off from DowDuPont last year. And both have pledged to emphasize short-term, low-risk R&D projects in service of existing businesses. This is as opposed to higher-risk but ambitious long-term projects—“moonshots,” as DuPont CEO Ed Breen calls them—to create new businesses.

In contrast with R&D spending, the capital spending total of the 41 companies that disclose those figures hit $19.0 billion, a 2.9% increase.

The figures show that capital spending remained strong even as companies complete massive US petrochemical projects, like new ethylene and polyethylene plants intended to take advantage of cheap natural gas extracted from shale.

Surely, 2020 will see capital spending decline. Many large chemical companies have already said so. Work on some projects is slowing because of social distancing. Moreover, given the effects the shutdown of the economy will have on growth, companies are trimming capital budgets to save money.

For example, LyondellBasell is reducing its 2020 budget from $2.4 billion to $1.9 billion. Eastman Chemical is cutting capital expenditures by about $100 million. Celanese is trimming its capital spending budget from $500 million to $350 million.