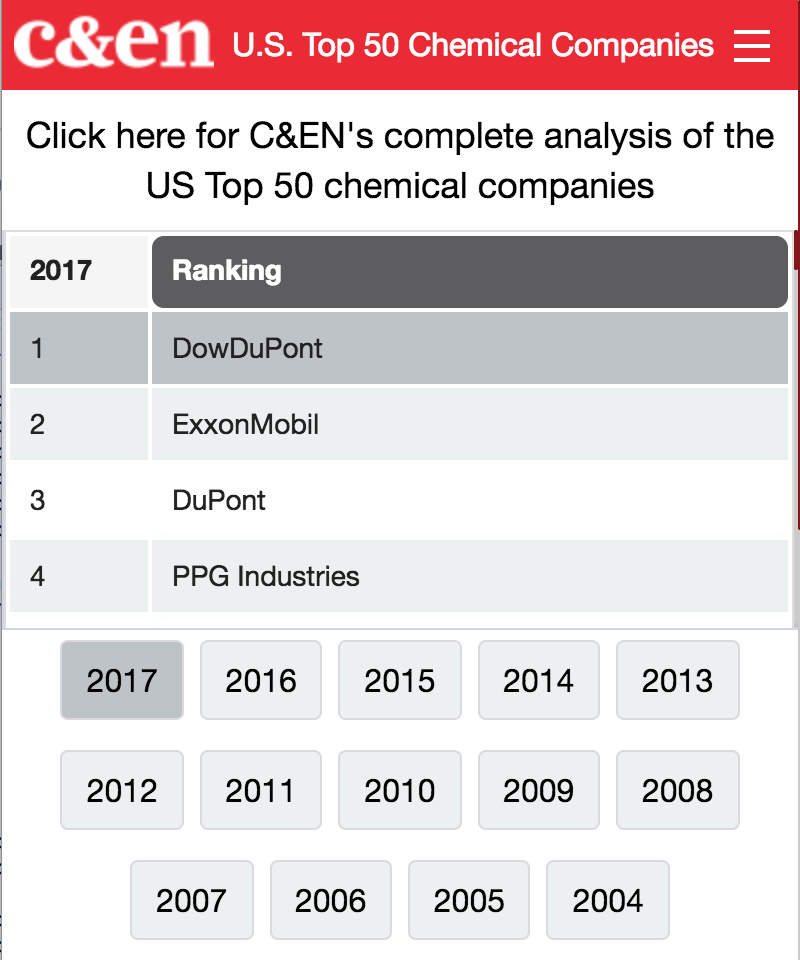 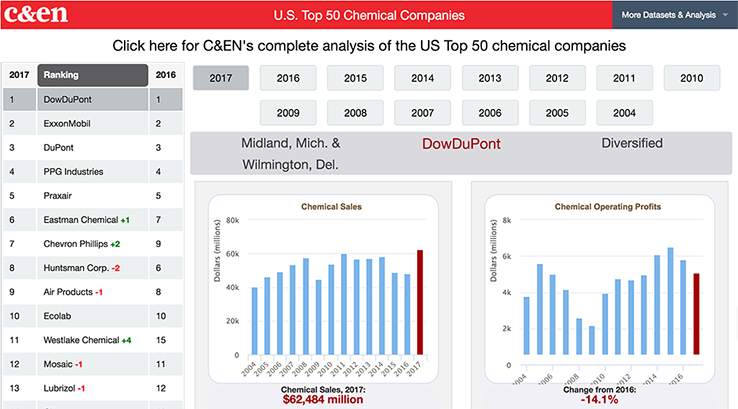 Perhaps the biggest takeaway from C&EN’s latest ranking of the top 50 U.S. chemical producers is that times are good for the chemical industry. Sales grew, and so did profits. Combined, the 50 firms generated $285.4 billion in chemical revenues in 2017, the year that forms the survey’s basis. The figure represents a 9.4% increase over the same firms' performance in 2016 and marks a turnaround after three years of falling chemical sales.

Increased shipment volumes contributed little to the 2017 rise. According to the American Chemistry Council, a trade group that keeps track of U.S. chemical demand, shipments increased a mere 0.8% in 2017.

Energy and raw materials are a better explanation for the rise—and for the drop in the prior three years. Because of high production from shale deposits, oil prices fell from about $95 per barrel to less than $40 over the course of 2014 and 2015. With inputs cheaper, chemical prices likewise fell, dampening sales for 2014, 2015, and 2016.

Oil prices bottomed out in 2016 and have climbed since then, lifting chemical prices, and thus sales, for 2017.

Profits from chemical sales increased in 2017, but only by a bit. The 45 firms out of the 50 on the list that report them posted a combined $34.3 billion in profits on chemical sales, a 3.0% increase from their 2016 profits.

Still, the future looks bright for the U.S. industry. Combined market capitalization for the 35 public firms in the ranking ended 2017 at $475.2 billion, an increase of 25.7% from their mark of the year before. This is a sign that investors expect chemical companies to make more money down the road.

A couple of indicators suggest that sales will grow this year. The American Chemistry Council predicts chemical volumes will increase by a healthy 3.7% in 2018. And the U.S. Energy Information Administration forecasts that oil prices will average $59 in 2018, an increase from $51 in 2017.

The new firm tops C&EN’s ranking with $62.5 billion in sales. The figure captures Dow’s results for the full year, plus the old DuPont’s from Sept. 1 onward. DuPont remains in this year’s listing, at a lofty number 3, for the $17.3 billion in sales it racked up during the first eight months of 2017.

Had the merger occurred at the beginning of 2017, DowDuPont would have had $79.5 billion in sales.

DowDuPont will be around for all of 2018. A full year of results from both the former Dow and DuPont businesses will no doubt expand its lead in the ranking.

Then the company will break up into three firms in 2019, all of which should make the ranking two years from now. Two will have familiar names. A materials science company with $44 billion in sales will have Dow in its title. The DuPont moniker will go to a firm consisting mostly of specialty materials businesses with $21 billion in sales. The name Corteva Agriscience will go to a $14 billion-per-year company formed from the agricultural businesses of Dow and DuPont.

C&EN’s top 50 rankings always bear the marks of merger and acquisition activity. But the Dow-DuPont merger aside, the effects this year weren’t as dramatic as they sometimes are.

A few companies on the list reported big changes in results due to transactions. The most obvious example is DowDuPont, which is about 30% bigger than Dow alone was last year.

Huntsman Corp., number 8 in the survey this year, saw its sales decline by 15% because of the spin-off of its Venator titanium dioxide business, which is based in the U.K.

Three companies joined the ranking this year. PQ, formerly privately held, had an initial public offering of stock and now discloses its financials. It debuts at number 36. Cambrex and Cabot Microelectronics, both fast-growing firms, make the list at numbers 49 and 50, respectively.

A few other firms are poised to disappear from the ranking soon. Bayer is close to completing its purchase of Monsanto. Linde and Praxair may consummate their merger later this year. And Japan’s Kuraray completed its purchase of Calgon Carbon earlier this year.

According to the management consulting firm PwC, 2017 was a mixed year for M&A. The company counted 909 chemical transactions globally during the year, a 6% increase from the year before. But because of a lack of megadeals worth several billion dollars or more, the overall value of deals dropped 66%, to $64 billion.

Craig Kocak, U.S. chemical deals leader for PwC, expects that to change. “A renewed interest in large international acquisitions is imminent,” he says.

Thanks to emerging interest in electric vehicles and ongoing demand for battery-containing consumer products, lithium chemicals were a big moneymaker in 2017 for the companies lucky enough to be in the business.

Albemarle, the world’s largest producer of the battery raw material, earned profits of $518 million on $1.3 billion in sales in its lithium business. The nearly 40% margin is exceptional for the chemical industry.

FMC, the fourth-largest producer, wasn’t far behind. It posted a profit margin of 36.5% on $347.4 million in lithium chemical sales.

“During the last couple of years, a surge in demand in an under-supply environment has led prices to more than double,” says Vincent Ledoux-Pedailles, associate director for lithium and battery materials research at the consulting group IHS Markit.

Ledoux-Pedailles expects prices to remain high for another couple of years and growth in the industry to remain strong. He predicts that global lithium chemical demand, now about 220,000 metric tons per year, will triple by 2025.

Seeking to capitalize on the trend, Albemarle is investing heavily. It is spending $1 billion to bring on 165,000 metric tons of lithium capacity by 2021. It will add another 100,000 metric tons thereafter.

DowDuPont is the stock market leader, too

A stock market value of $165.8 billion at the end of 2017 makes DowDuPont far and away the leader on the market capitalization board. The all-equity deal combined the shares of both firms to form DowDuPont.

Two other companies on the list saw their market valuations more than double, thanks to fortuitous business conditions. Chemours and Kronos Worldwide are both producers of the white pigment titanium dioxide, which is enjoying strong profitability.

Electronic chemicals suppliers Versum Materials and Cabot Microelectronics saw heady spikes in stock valuation of 35.1% and 52.5%, respectively. AdvanSix, formerly Honeywell’s nylon business, saw a 90.0% increase in its market capitalization in its first full year of trading on its own.

Only Ashland saw a large decline, of 34.9%. But the company isn’t performing badly. It simply spun off its Valvoline motor oil business, and its smaller overall size is reflected in the stock market value.

BASF is once again the largest foreign-headquartered chemical company in the U.S., with $18.0 billion in 2017 regional sales after solid 8.5% growth. The company should see additional growth this year now that it has started up an ammonia joint venture in Freeport, Texas, with the Norwegian fertilizer maker Yara.

A few companies joined C&EN’s tabulation of foreign company operations in the U.S. this year. Ineos, a regular on C&EN’s Global Top 50 chemical company ranking, debuts at number 5 after publishing an annual report with full financial figures, including regional results. SABIC, number 9, now reports regional sales figures and has been added to the list. Braskem, off last year because it posted its results late, rejoins at number 15.