Help for helium users is on the way

Scientists who depend on the rare element can expect a huge increase in supplies in the next 5 years, but geopolitical risks mean interruptions could occur at any time

Not long ago, Sophia E. Hayes, a chemistry professor at Washington University in St. Louis, had to shut down two of six nuclear magnetic resonance spectrometers because of helium shortages. The instruments are workhorses used to characterize the physical and chemical properties of molecules, and helium is essential to their operation: the noble element keeps the superconducting magnet at the instrument’s core below 4.2 K.

Equally worrisome, Hayes says, are the high prices she is paying for helium when she can get it. “We are on a fixed budget,” she says. “We simply couldn’t sustain the cost for all our magnets.”

Another NMR user, a chemist at a midwestern US university who asked to remain anonymous so he wouldn’t upset his supplier, says that supplier has cut back on helium for sale, for which he’s now paying $27 per liter, triple what he paid 15 years ago. He had to take off-line an electrospray ionization Fourier transform ion cyclotron resonance mass spectrometer, which has a helium-cooled magnet, because of helium prices. “I’m not sure why helium is so hard to come by,” he says. “Maybe suppliers are prioritizing others over us.”

Helium isn’t the tail that wags the dog. Helium is the flea on the tip of the dog’s tail.
Phil Kornbluth, president, Kornbluth Helium Consulting

Fortunately for scientists who rely on helium, the shortages and price fluctuations may come to an end soon. Consultants who track helium say new helium projects—from producers large and small—starting up over the next 5 years will yield plentiful supplies. That’s also good news for chromatography and mass spectrometry users who count on the element as a carrier gas, and for others who depend on it for medical imaging, electronics manufacturing, and, yes, even party balloons.

But the optimistic forecast comes with caveats. Given trade and other geopolitical uncertainties, no one can guarantee that helium will flow easily to all those who need it, the consultants say. Conserving helium and substituting other elements when possible are protective measures that scientists should consider.

Helium supplies have been especially tight ever since the June 2017 blockade of Qatar by four Arab countries cut off 30% of the world’s helium, says Phil Kornbluth, a consultant who previously ran Matheson Tri-Gas’s helium operations. Qatar found a work-around, but the effects of the shutdown lingered.

Credit: Air Liquide
This RasGas liquefier in Qatar, shown under construction, was the world's largest helium liquefier when it was installed in 2013.

New problems cropped up this summer. The helium market had been operating at about a 10–15% deficit. Then the maintenance shutdown of ExxonMobil’s giant helium plant in Wyoming, and a maintenance outage at a plant in Arzew, Algeria, increased the deficit to about 40%, Kornbluth says. By the end of August, both facilities were back on line, and now “we are back to where we were with a 10–15% supply deficit,” Kornbluth says.

But a number of large new sources set to start up beginning in 2020 will mean a healthier supply situation for at least the first half of the 2020s, Kornbluth points out. Those projects include a 12 million m3 per year tranche of helium from Qatar beginning late next year. After the first of Gazprom’s three 20 million m3 helium units opens in 2021 in Russia, any lingering shortages should be over, he says.

All told, nearly 80 million m3 of new helium capacity should be available by 2024. The new capacity is about half the 160 million m3 of helium produced worldwide in 2018. The “mega-increase” will bring down helium prices, predicts Bala Suresh, industrial gas director at the consulting firm IHS Markit.

Encouraging too is an initiative from BASF and Linde to offer gas processors a suite of natural gas conditioning equipment that includes what they say is an economical helium processing unit. The BASF-Linde process separates helium from natural gas with a polyimide hollow-fiber membrane from Evonik Industries. A Linde pressure-swing adsorption unit then purifies it up to 99.999%.

A Linde spokesperson says the firm doesn’t expect buyers to beat down the doors. Gas processors tend to be “rather conservative” investors, she says. Suresh says the process will improve the cost-effectiveness of helium separation but adds that he is “not sure it will make a major impact.”

How long relative calm will prevail in the fragile supply chain that brings helium to global customers is anyone’s guess. Last year, the US government ended sales of helium reserves from the Cliffside Gas Field storage cavern in Potter County, Texas. Sales from those reserves at one time accounted for one-third of the world’s helium output and helped compensate for supply outages. The cavern still operates and stores privately owned helium for refiners such as Air Products and Chemicals and Messer Group.

Given the geopolitical risks, it’s not a good idea to depend on Qatar, Algeria, and Russia as a source of helium.
Mark Elsesser, associate director of government affairs, American Physical Society

But the US government has mandated the sale of the Cliffside cavern and the pipeline that connects it to refiners by Sept. 30, 2021. The sale will include 68 million m3 of government-owned gas remaining in the reserve, Kornbluth says. He suspects that one or more of the major helium refiners will ultimately win the auction for the government assets.

Scientific organizations such as the American Chemical Society, which publishes C&EN, and the American Physical Society are concerned about the sale and suggest that the US needs to maintain a strategic reserve.

Big helium projects with an estimated total output equal to half the current world production are planned for the next few years.

Record prices for helium have encouraged a number of small projects, mostly in the US and Canada. 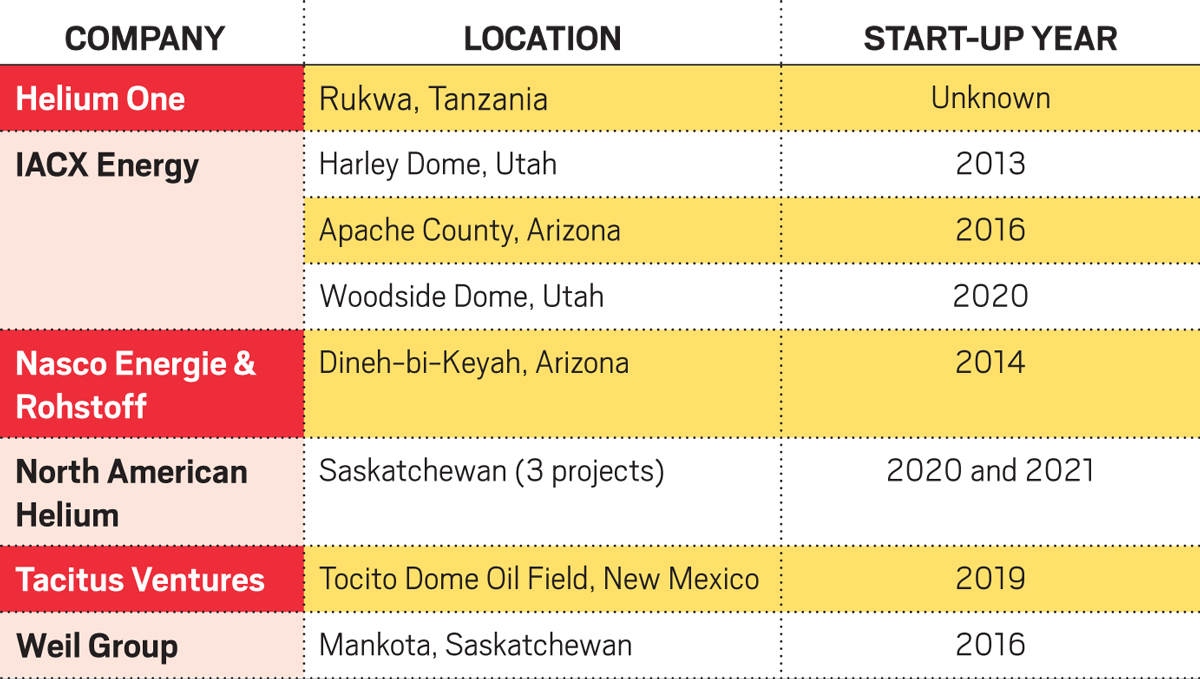 “Given the geopolitical risks, it’s not a good idea to depend on Qatar, Algeria, and Russia as a source of helium,” says Mark Elsesser, a government affairs expert at the physics society. The two organizations want the government to retain ownership of Cliffside. They also suggest that academic users should practice helium conservation.

Elsesser adds that the two organizations are encouraging the National Science Foundation to expand a small program in its Division of Materials Research to help academic researchers defray the cost of helium recycling equipment. Such equipment, including purification and refrigeration units, can cost $100,000 or more, depending on the size of the installation.

While helium is a nonrenewable resource, analysts say the world has about a 100-year supply. According to government data, the US has 40% of the world’s helium resources—double that of number 2 Qatar.

But getting at those resources, often in wells commingled with poor-quality natural gas, can be a problem. ACS representatives worked with congressional staff to amend a bill in the US House of Representatives, the Fossil Energy Research and Development Act of 2019, to include language encouraging the Department of Energy to research more efficient ways to extract helium from gas.

Until recently, few companies drilled for helium alone. Large producers separate helium as a by-product of their main target, natural gas, which contains anywhere between 0.2 and 7% helium. Gazprom’s project, for instance, intends to send 42 billion m3 of natural gas annually to customers in China. The helium phase of the project, about 60 million m3, is something of an afterthought intended to take advantage of high helium prices.

The high prices have also motivated wildcat operators to develop projects intended solely to produce the element. Kornbluth figures the small producers, exploiting wells mostly in the US and Canada, now account for about 5% of world supply and could eventually provide 10%.

Among the small helium producers is Dallas-based IACX Energy. “It’s a good time to be in the helium business,” says Scott Sears, the firm’s president of upstream helium production.

IACX operates two units intended to produce only helium: one in Utah at Harley Dome, and one in Apache County, Arizona. Sears expects a third project to come on line in Woodside Dome, Utah, next year, but permitting and regulatory hurdles could postpone it.

Soon to be a producer is North American Helium. CEO Nicholas Snyder says his company is developing fields in the US and Canada that will be reliable helium resources not subject to supply disruptions from unstable regions. “There is tremendous potential for helium production on our properties,” he says.

The company has raised $50 million to date from private investors, Snyder says. Within the next 2 years, the firm hopes to open three helium projects in Saskatchewan.

However, the surfeit of helium on the horizon is no reason to bring out the party balloons. Most of the world’s helium will still come from natural gas producers for whom the inert gas just provides a nice bit of additional income. Interruptions in output because of maintenance shutdowns, trade and diplomatic disputes, and even shifts to renewable energy can always put supplies at risk.

“Helium isn’t the tail that wags the dog,” Kornbluth says. “Helium is the flea on the tip of the dog’s tail.”

Share X
To send an e-mail to multiple recipients, separate e-mail addresses with a comma, semicolon, or both.
Title: Help for helium users is on the way
Author: Marc S. Reisch
Chemical & Engineering News will not share your email address with any other person or company.