Drug Discovery: Researchers use the power of multivalency to design a better cancer trap 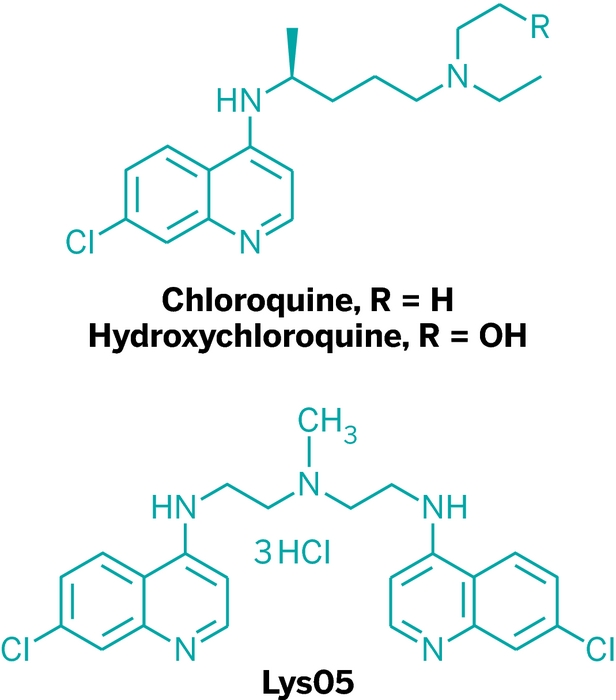 A newly designed and synthesized compound inhibits a protection scheme that helps cancer cells evade chemotherapy, and it has much greater potency than a comparable agent in clinical trials. The compound, called Lys05, is a possible lead for a drug that could be coadministered with other cancer drugs to enhance their effectiveness.

Lys05 inhibits autophagy, a process biomedical researchers think could be exploited to improve cancer therapy. Autophagy, which occurs in cell lysosomes, is a survival pathway cells use to repair damage, protect themselves from reactive oxygen species, and recycle intermediates needed to sustain their metabolism in response to stress. Because cancer cells are more dependent on the pathway than normal cells, inhibitors of autophagy can enhance cancer cells’ susceptibility to chemotherapeutics, possibly without causing too many side effects.

Two examples of drugs that inhibit autophagy and could be used as chemotherapeutic enhancers are the malarial medications chloroquine and hydroxychloroquine. Because chloroquine has more side effects, only hydroxychloroquine has been or is being tested in nearly 30 human clinical trials as an add-on to enhance chemotherapy for melanoma and pancreatic, renal, and other cancers. Autophagy requires an acidic environment in lysosomes, and both antimalarial agents turn off autophagy by deacidifying the lysosome.

But it may be difficult to administer enough hydroxychloroquine to block autophagy efficiently, and it can take a month or so for substantial levels of the drug to build up in the bloodstream.

Now, chemistry professor Jeffrey D. Winkler and cancer specialist Ravi K. Amaravadi of the University of Pennsylvania and coworkers have applied multivalency in designing Lys05. The compound is about 10 times as active as hydroxychloroquine at inhibiting autophagy in living cells and mice (Proc. Natl. Acad. Sci. USA, DOI: 10.1073/pnas.1118193109).

Multivalency is the use of two or more active groups in the same molecule to provide bioactivity improvements that are much more than just additive. The Penn group used a linker to connect two chloroquine units to form the lead compound Lys05—which is named after the lysosome, where it works the same way as chloroquine and hydroxychloroquine do.

“Having an agent that’s 10 times as potent at inhibiting autophagy could advance this approach tremendously,” says Eileen White, an autophagy and cancer expert at the Cancer Institute of New Jersey and Rutgers University. However, she notes that it will be important to now assess how much of Lys05’s activity specifically depends on an operational autophagy pathway, to ensure that it’s working as expected. In addition, the Penn group noted gastrointestinal toxicity in mice that received high doses of Lys05, and possible liver toxicity and neurodegeneration, which are other common side effects of suppressing autophagy, should also now be assessed, White says.

Alec Kimmelman, an oncologist at Dana-Farber Cancer Institute in Boston whose areas of specialization include pancreatic cancer and auto­phagy, comments that “there is a need to develop more-potent autophagy inhibitors.” A Lys05-based agent “could make its way to the clinic,” assuming it has good toxicity profiles and favorable drug properties in people, he adds.

The Penn group notes in its scientific report that “the enhanced lysosomal accumulation, autophagy inhibition, and therapeutic activity observed” with Lys05 in cancer models suggest that chloroquine multivalency “may also be associated with improved therapeutic activity in diseases such as malaria and rheumatic disorders, in which chloroquine derivatives have played an important therapeutic role for decades.”

Winkler and Amaravadi are currently collaborating with other teams at the Wistar Institute in Philadelphia and at Penn on experiments to identify the exact cellular target of Lys05 to help validate it as a drug lead. In addition, the researchers note that they are interested in finding industrial partners to work with to develop the full potential of the compound.

Drug Discovery
A small molecule in the gut could explain bariatric surgery’s anti-diabetic effects
Vaccines
What will it take to make an effective vaccine for COVID-19?
Pharmaceuticals
Drug ingredients considered inert might have biological activity
Share X
To send an e-mail to multiple recipients, separate e-mail addresses with a comma, semicolon, or both.
Title: Agent Boosts Cancer Cells’ Vulnerability
Author: Stu Borman
Chemical & Engineering News will not share your email address with any other person or company.