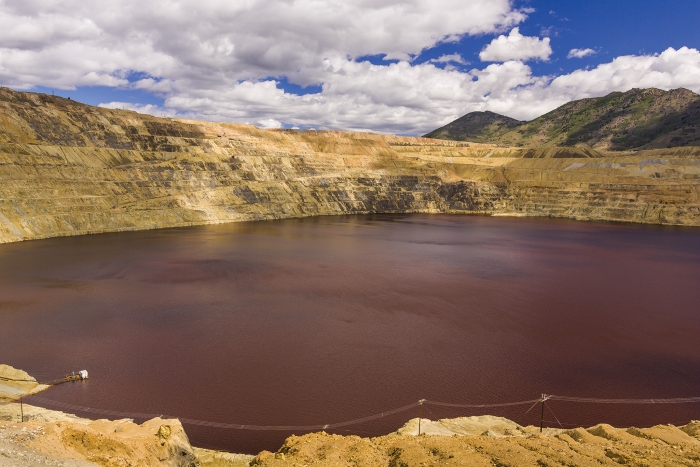 Two species of fungi isolated from an abandoned mining pit in Montana, when cultured together, produce a compound that kills four antibiotic-resistant strains of Staphylococcus aureus bacteria (J. Nat. Prod. 2017, DOI: 10.1021/acs.jnatprod.7b00133). Although its structure resembles a known class of antibiotics, the compound appears to kill bacteria in a new way, the researchers say. 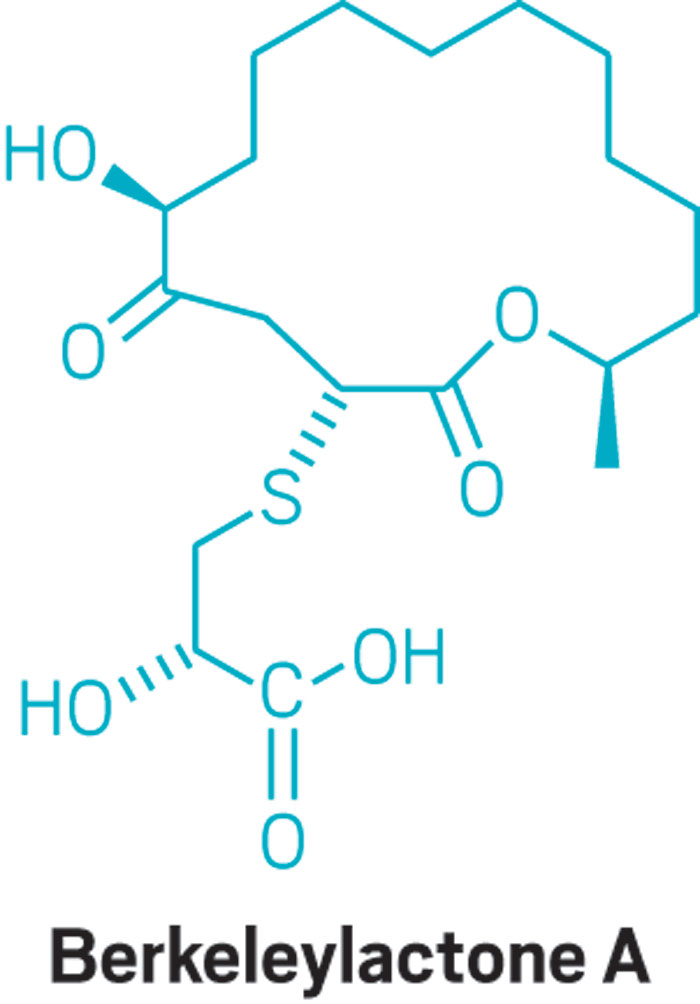 After companies suspended copper mining at the Berkeley Pit outside of Butte, Mont., in 1983, runoff and groundwater collected in the pit and created a lake. Oxidized rock exposed by mining acidified the water to pH 2.5, and heavy metals including iron, copper, arsenic, and cadmium leached into the water. The water is so toxic that last winter, several thousand snow geese died after waiting out a snowstorm in the pit during their annual migration.

Microbial life, however, finds the pit more hospitable. In extreme environments, such as acidic pH and high metal concentrations, microbes often produce molecules with interesting biological activity. For almost 20 years, Andrea A. Stierle and Donald B. Stierle, both natural products chemists at the University of Montana, have been studying compounds produced by individual fungi isolated from the water and sediment at the Berkeley Pit. They have found molecules that slow inflammation, cell death, and cancer metastasis. But until now, the researchers had not found antibiotics.

The Stierles wondered whether culturing together two different species of Penicillium fungus, originally isolated from the same sample, would produce new bioactive compounds that neither strain makes when grown by itself. They started growing one fungus in a liquid broth and introduced the other species a day later. After the two fungi grew together for six days, the researchers collected the organic molecules the cells produced, extracting them from the broth with chloroform. They used a protein inhibition test the team had developed previously to identify molecules with potential biological activity and then determined the structures of those molecules using various spectroscopic methods. The researchers found a variety of 16-membered macrolides—molecules with a lactone ring—that were not produced when either fungus was grown alone.

Because these structures resembled known antibiotics such as erythromycin, the Stierles and their colleagues tested several of the isolated compounds for antibiotic properties. One compound, Berkeleylactone A, was active against four strains of methicillin-resistant S. aureus.

Structural differences and biochemical tests indicate that this molecule could work differently than similar macrolide antibiotics, Andrea Stierle says. Berkeleylactone A lacks sugars or a double bond, two structural features thought to be important to the antibiotic properties of other 16-member macrolides isolated from bacteria or fungi. And although its exact method of action is unknown, it does not inhibit protein synthesis or stall ribosome activity like other macrolide antibiotics do.

Lesley-Ann Giddings, a natural products chemist at Middlebury College, thinks it’s interesting to co-culture two fungi, because most researchers who have used this strategy to identify new molecules have grown a bacterium and a fungus simultaneously. Co-culturing microorganisms establishes a competition for resources that can trigger one microbe to express otherwise inactive genes and produce compounds that kill the other.

Comments
Robert C. Reynolds (April 19, 2017 6:06 PM)
This article is an excellent example of the natural forces that drive competitive advantage in nature. It seems to have taken a long time for researchers to understand and catch up with what makes bugs do what they do to compete. In a natural setting, it is clear that the presence of other bacteria and their byproducts have driven antibiotic production, and while mono-culturing of antibiotic producing bacteria and fungi have been hugely successful, co-culturing paradigms are now needed to stimulate natural conditions and drive production of new species that can answer the ever increasing resistance issues with standard natural product antibiotics. The combinations appear to be endless, and it is difficult to believe that these highly flexible (genetically and metabolically) organisms cannot answer the need for new antibiotics when co-cultured under the right conditions to drive diversity and competitive advantage. I laud these researchers for their work and would encourage the government to answer with appropriate funding mechanisms to further advance research in this area as it is clear that all the $$$ spent on HTS and small molecule antibiotic discovery is not the only solution.
Reply »

Joseph J. Lewis (April 19, 2017 9:14 PM)
It would be interesting to note what biological activity would result from the products of other known macrolide antiobiotics should their double bonds be reduced and/or sugars be removed.
Reply »

Faizunnahar D. (April 29, 2017 10:08 PM)
What a promising discovery! The dedication of the researchers in studying the compounds from the Berkeley Pit for nearly two decades is truly admirable, and I hope they have many more new, exciting innovations as these.
Reply »

David R Thomas (April 30, 2017 8:24 AM)
Very interesting donniker on the Copper mining's behalf. I hope that this will also give weight to the argument of open hazardous pits and wildlife hazards. But with that said, It is good to see science studying these waist lands and waters see who what when where there experiment may be of use. I hope maybe one day that perhaps something of this nature could help the scourge of millions of Tick borne related disease sufferers.
The Lyme and coinfections related to this scourge has only just begun and we are going to watch our children bury their children because of ill practices of our science communities. Perhaps we could start thinking things through, before we create monsters.
Reply »

Damon Kelley (May 7, 2017 11:10 AM)
Breakthrough water equipment developed by really smart people that listened to environmental activists about fracking concerns will soon be deployed and cleaning up those messes. We're talking about heat so intense, it breaks molecular bonds and carbonizes everything inert. This recently verified, patented technology was studied by Texas A&M's Physical and Environmental Science's own department chairman and has the ability to clean and purify ANY contaminated water ANYWHERE in the world. It also desalinates heavy brine water and sea water. Our machine is so efficient, it even heats water at one-third the cost of conventional equipment. Big change is coming via sonic cavitation.....soon!
Reply »