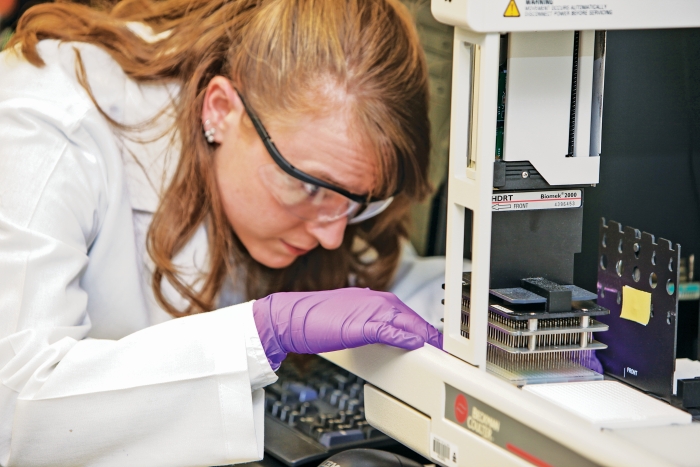 Credit: EPA
EPA is facing big cuts to its research budget in 2018, including support for high-throughput screening methods for identifying potentially toxic chemicals.

In a move toward fulfilling his campaign promise to “get rid of” the Environmental Protection Agency “in almost every form,” President Donald J. Trump in March proposed slashing EPA’s budget by 31% in fiscal 2018. Details of how the Trump Administration would do so have recently emerged in a leaked internal EPA memo.

EPA budget cuts by the numbers

The leaked document—a March 21 memo from the agency’s acting chief financial officer, David Bloom—has been widely distributed on the internet. EPA officials need to finalize the plan’s details, which must undergo White House review before the President sends his full 2018 funding request to Congress next month. Lawmakers can alter the request as they appropriate money for the new fiscal year that begins on Oct. 1.

Nonetheless, the memo indicates which parts of the agency the Trump Administration wants to pare back or kill. Industry and environmental groups are already clamoring to save their favorite EPA programs from getting the ax.

Overall, the President is asking for $5.7 billion in fiscal 2018 funding for EPA. That would be $2.6 billion less than the estimated $8.3 billion the agency could get this year if Congress extends a stopgap funding law that expires on April 28. The memo anticipates elimination of more than 4,000 jobs at EPA in 2018, bringing its workforce down to 11,548 full-time employees.

But the memo shows one apparent bright spot in EPA’s budget: an increase of $13.8 million to support work required under the revised Toxic Substances Control Act (TSCA). The new chemical safety law, known as the Lautenberg Chemical Safety Act, was enacted last year.

Funding for other programs related to chemical safety, however, would face major cuts. For example, EPA research on computational toxicology and high-throughput in vitro toxicity testing would be scaled back.

Also, the plan would eliminate EPA’s Integrated Risk Information System (IRIS) program for assessing the risks of toxic chemicals. In an IRIS assessment, the agency provides expert scientific judgments on how much exposure to a particular chemical is safe. EPA regulators in the U.S. and abroad use these numbers to establish cleanup levels for pollution in air, water, and soil. In the U.S., IRIS values affect the affordability and degree of cleanups as well as a polluter’s financial liability. The program has historically taken years to finish each assessment and has drawn calls for improvements from industry, Congress, environmental activists, and the National Research Council.

Environmental advocates are criticizing the Trump Administration’s plan for defunding IRIS, saying it would limit the agency’s ability to implement the new chemical safety law.

“EPA’s ability to conduct risk evaluations under the new TSCA would be severely curtailed by the loss of both expertise and capacity that reside in the IRIS program,” Richard Denison, a lead senior scientist at the activist group Environmental Defense Fund, says in a blog post.

The free-market-advocating Competitive Enterprise Institute and other conservative groups have pushed Congress to defund the IRIS program, claiming EPA’s assessments are unscientific and poorly designed. Some IRIS critics also say the program is no longer needed with a beefed-up TSCA program.

The American Chemistry Council (ACC), which represents many chemical manufacturers, declined to comment on the Trump Administration’s plans to eradicate the IRIS program. The group says it is “committed to working with the Administration and Congress to ensure EPA has funding to carry out essential responsibilities, including the implementation of the Lautenberg Chemical Safety Act.”

ACC’s former senior director of regulatory affairs, Nancy Beck, has been tapped to be principal deputy assistant administrator of the EPA office that oversees TSCA implementation. Beck has spoken out in the past about the IRIS program’s deficiencies.

EPA’s ability to conduct risk evaluations under the new TSCA would be severely curtailed by the loss of both expertise and capacity that reside in the IRIS program.
Richard Denison, lead senior scientist, Environmental Defense Fund

To help offset some of the costs of implementing the updated TSCA, the agency would rely on industry-paid user fees, the memo says. EPA is required to establish a user-fee system under the revised TSCA, but the agency is not subject to a statutory deadline for making it operational. The Trump Administration plans to expedite completion of a rule instituting these fees to ensure this funding stream is running for fiscal 2018.

EPA’s pesticide office would also restructure to rely more on industry fees, the memo indicates. The agency currently collects fees from pesticide manufacturers, but the authority Congress granted EPA to do so expires on Sept. 30. Negotiations to reauthorize such fees through 2023 have already begun.

In fiscal year 2016, “the pesticide industry paid $27.5 million in maintenance fees and $19.1 million in registration service fees,” says Beau Greenwood, executive vice president of CropLife America, a trade group representing pesticide manufacturers. “Industry has agreed to pay an increase in maintenance fees totaling $31 million per year over the life of the reauthorization,” Greenwood says. Anything above that level that will be a hard sell, he predicts.

EPA plans to allow its pesticides program to use the fees for a broader range of activities, including speeding up pesticide safety reviews. EPA also has about $30 million of unspent fee money that it plans to carry over to support core pesticides work.

In addition, the memo indicates that numerous research grants supported by EPA are slated for elimination, including those related to pollution prevention, lead poisoning prevention, water quality, air quality, energy, and sustainability. Extramural grants under the agency’s Science to Achieve Results program, which complements its intramural research program, would also be terminated. This isn’t the first time these grants have been targeted for elimination. President George W. Bush proposed dropping them in 2003, but Congress ultimately funded them.

EPA’s Science Advisory Board, an external group of scientists who advise the administrator, would also see its budget slashed by $542,000, or 84%, compared with the 2016 funding level. The memo says the planned cut reflects “an anticipated lower number of peer reviews” of EPA scientific work, such as hazard assessments of chemicals.

In addition, many long-term, regional environmental cleanup programs would have funding zeroed out, including the Great Lakes Restoration Initiative and the Chesapeake Bay Program. Also, the agency’s Endocrine Disruptor Screening Program, which aims to test chemicals for their ability to affect the hormone system, would be abolished, according to the memo.

In a move reflective of Trump’s past remarks describing climate change as a hoax, his Administration intends to halt all EPA climate change activities by defunding them. This action, the memo explains, would focus the agency’s resources on “core statutory requirements” under federal pollution control and chemical safety statutes.

If Congress agrees to it, the Trump budget plan will get rid of EPA’s voluntary programs with industry to reduce greenhouse gas emissions. These include efforts to curb methane leaks from natural gas pipelines, landfills, and coal mines, as well as work to lower releases of the highly potent greenhouse gas sulfur hexafluoride used to insulate electric power systems.

Also on the chopping block is EPA’s Energy Star program, which identifies energy-efficient homes, buildings, and products such as light bulbs and appliances. The Administration wants to transfer this program to an organization outside the government, the memo says.

The cuts would entail hefty reductions to hazardous waste remediation and enforcement activities, including a reduction of more than $152 million from the Office of Land & Emergency Management. Nearly $128 million of that reduction would come from federal funds that support cleanup in states and local communities. In addition, the cuts would reduce federal money for emergency response and contamination removal by $29 million and explicitly return responsibility for cleanups that aren’t time-critical to states and local communities, the agency says.

The budget memo also shows that the Trump Administration plans to curtail EPA’s international activities. In part, this would involve halting the contribution the U.S. makes to an international fund to help developing countries switch from stratospheric-ozone-depleting chemicals, such as chlorofluorocarbons, to modern alternatives. For 2017, that contribution is expected to be about $8.9 million.

The Administration also wants EPA to stop bilateral efforts to clean up pollution along the U.S.-Mexico border. And it intends to withdraw the U.S. from a two-decade-old environmental cooperation program with Canada and Mexico that was formed in conjunction with the North American Free Trade Agreement.

Whether the President’s official 2018 budget proposal will include all of these details remains unclear. But given Trump’s promises to slim down EPA, most, if not all, are likely to be retained. Whether Congress will go along with the plan to prune back the agency, however, is even more uncertain.