Despite the petrochemical industry’s big buildup, the U.S. should have enough ethane to go around 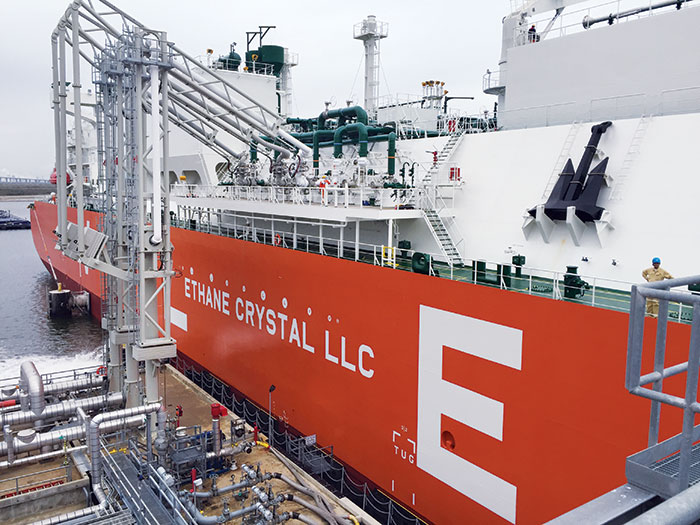 It has been about a decade since the U.S. oil and gas industry honed the techniques of horizontal drilling and hydraulic fracturing to tap into shale rock formations and release unprecedented amounts of hydrocarbons.

The shale revolution that followed reversed the fortunes of the U.S. petrochemical industry. The U.S. had been one of the most expensive places in the world to produce the chemical building block ethylene. Thanks to cheap ethane extracted from shale gas, it is now a global leader in petrochemical production.

Even 10 years on, nearly every week still brings news of chemical projects to exploit this cheap feedstock. Companies cut the opening ribbon last year on the first of a massive wave of multi-billion-dollar ethylene crackers on the Gulf Coast. Construction will wrap on more plants this year and next. And firms are still green-lighting projects extending well into the next decade.

Ethane is helping build the petrochemical industry abroad, too. It is leaving the U.S. via pipeline to Canada. Gleaming, purpose-built tankers are departing from terminals on the Houston Ship Channel and Marcus Hook, Pa., laden with ethane for crackers in Europe, Asia, and Latin America.

Related: Stepping On The Gas

With so many straws dipping into the shale, it is natural to fret about it being sucked dry. After all, the Middle East doubled its petrochemical output in the 2000s and now doesn’t have enough ethane for many future projects.

But experts say the U.S. won’t run out of ethane anytime soon. In fact, if the U.S. has a feedstock problem, it is that petrochemical makers haven’t been adding capacity fast enough to keep up with ethane supply. As long as the oil and gas industry keeps humming, ethane should be plentiful.

Ethane is a product of oil and natural gas extraction. Natural gas is primarily methane, but it also contains a mixture of ethane, propane, butane, and pentane that the industry calls natural gas liquids. NGLs also are a large component of the associated gases that come out of a crude oil well. Fractionators break up NGLs into their constituent components for fuel and chemical markets.

The shale boom has had a miraculous impact on U.S. hydrocarbon output. In early 2008, the U.S. industry produced a little more than 5 million barrels of oil per day. Late last year, it was producing twice that much oil, according to the U.S. Energy Information Administration (EIA). Over the same period, U.S. production of natural gas climbed by nearly 40%.

Ethane output rose in kind. The U.S. produced about 750,000 barrels of ethane per day in 2008, according to EIA, enough to support more than 11 million metric tons of annual ethylene production. By the end of 2017, the U.S. was producing nearly 1.4 million barrels per day.

The petrochemical industry’s initial reaction to this bounty was to convert plants from naphtha to ethane feedstock and launch quick, incremental expansions.

Debnil Chowdhury, executive director of North American NGLs at the consulting firm IHS Markit, points out that the new chemical plants will mean an enormous leap in ethane consumption by 2020. “We are going from a market that was consuming 1 million barrels to one that will use 1.8 million,” he says.

Related: Ethane supplier to the world

Exports are also contributing significantly to demand, Chowdhury adds. The U.S. hit a record 245,000 barrels per day of exports in November, enough to support about 4 million metric tons of annual ethylene capacity. “It is almost three crackers’ worth of ethane being exported from the U.S.,” he says.

The oil industry is poised to meet this new demand from the chemical industry by recovering ethane currently being “rejected.” When the price of ethane is low, gas processors leave it with methane in natural gas. And for the last few years, as ethane production got ahead of chemical industry consumption of it, prices were at historic lows and rejection swelled. According to C&EN estimates, gas processors are rejecting more than 600,000 barrels per day, enough to support nearly 10 million metric tons of annual ethylene capacity.

“The chemical industry wasn’t prepared for all the ethane that was going to come from the shale boom,” Chowdhury says. But as chemical companies create demand, fractionators will go after it. “We’ll have rejection going to lower levels in the long term,” he predicts.

A flood of ethane 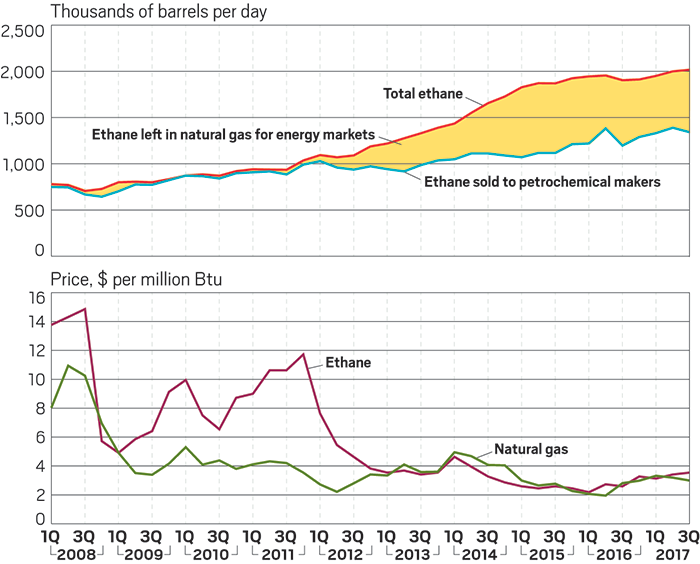 More ethane is coming out of the ground in the U.S. than the petrochemical industry can consume, depressing prices.
Sources: Energy Information Administration, Enterprise Products Partners, C&EN estimates

Bob Patel, CEO of the chemical maker LyondellBasell Industries, is similarly confident about ethane supply. He observes that rising oil prices will induce drilling for oil, and the ethane associated with it, especially from the Permian Basin, a West Texas formation whose fecundity is surprising industry watchers. “We continue to believe that ethane supply will be sufficient, if not in excess, as we move through the year,” he said on a conference call last month.

Canada’s Nova Chemicals is as optimistic about U.S. ethane as any company. Nova recently bought Williams Cos.’ ethylene cracker in Geismar, La. Additionally, Nova, along with sister company Borealis and the oil firm Total, just gave the go-ahead to build an ethylene cracker in Texas. “People are already talking about the next wave of ethylene expansions on the Gulf Coast,” says Naushad Jamani, senior vice president of olefins and feedstocks for Nova.

The company is also using U.S. ethane in Canada. Since 2014, Nova has been piping ethane from North Dakota oil fields to its operations in Joffre, Alberta. The scheme allowed the company to boost ethylene output and build a new polyethylene unit.

Jamani says North Dakota has a big surplus of ethane and not enough outlets to market. “Frankly, we wish we had done a bigger pipeline,” he says.

Nova also has two pipelines from Appalachia, in the eastern U.S., serving its Sarnia, Ontario, complex. One is from the Marcellus Shale in Pennsylvania; the other, recently completed, connects to the Utica Shale in Ohio. These pipelines allowed the company to convert the Sarnia cracker from naphtha feedstock to ethane. Nova is now upping the ante with a $2.2 billion project to expand the cracker by 50% and build a new polyethylene unit.

Like North Dakota, Appalachia has a big ethane surplus. Production should grow from 800,000 barrels per day today to 1.3 million barrels by 2022, according to Enterprise. In addition to Nova’s pipelines, ethane outlets in the region include a pipeline to Marcus Hook, a pipeline to the Gulf Coast, a Shell Chemicals ethylene complex under construction in Monaca, Pa., and a cracker that two Asian firms, PTT and Daelim, are planning in Belmont, Ohio.

Steve Hedrick wants to see more of that ethane stay in Appalachia. Hedrick is CEO of Appalachia Development Group, which is promoting a storage and trading hub for ethane, propane, and ethylene. It would help the region establish infrastructure similar to the Gulf Coast’s.

In a recent report, the American Chemistry Council, a trade association, said such a hub could catalyze $36 billion in investment and 100,000 jobs in the region. Hedrick thinks the region could support four or five crackers.

“The need for us to utilize locally and therefore create the greatest value out of raw materials in Appalachia is what drives us,” he says. “Otherwise, we limit ourselves to an extraction-based economy only.”

The project was originally envisioned as a $10 billion investment to create storage for six chemicals and pipelines along the Ohio and Kanawha River valleys. Boosters think the first phase of the project would be a more affordable $3.4 billion and could attract the crackers. The project has been taking steps toward a $1.9 billion loan guarantee from the Department of Energy. With that in hand, it would need just $1.5 billion in equity from investors.

The North American ethane cup isn’t bottomless. Looking down the road, Chowdhury expects only a couple of ethylene projects between 2025 and 2030. That’s because fuel-efficient and electric vehicles will start making their mark on oil consumption and, hence, NGL production. In addition, auto sales in the developing world will mature and slow.

But Nova’s Jamani says North America will be as good a place as any to make petrochemicals for quite a while. “We see North America as being in the driver’s seat in terms of petrochemical growth for probably the next 15 to 20 years,” he says.