What are Holi colors, and what gives them such vibrant hues?

Carousing with the colorful powder gets wild during the Hindu festival of Holi, but celebrants should take care to play it safe 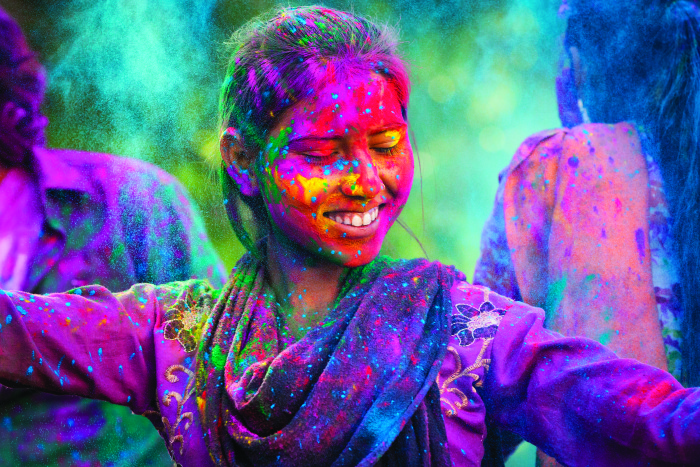 Holi morning dawns. Pristine white clothes await their fate. Soon these garments will be every color except white as they, and the people inside them, will be blasted with puffs of powdery color. Bright-colored pastes will coat faces. Flute-sized syringes full of tinted water will squirt colored liquid. During Holi, people let go of everyday inhibitions and shower each other with pigment in an anything-goes color riot.

Holi is an ancient festival that celebrates spring and the harvest, with multiple Hindu legends to explain its origins. The one that connects to its color wars concerns the lord Krishna, who feels embarrassed by his blue skin compared with the fair skin of his love, Radha. So his mother suggests he smudge Radha’s skin with color to make him feel better.

Traditionally, Indian men and women could not mingle, says Michael Rajamathi, a chemist at St. Joseph’s College Autonomous. But Holi was an occasion when they could, touching one another with colorful pastes. The festival does not include prayers, Rajamathi notes. It’s a holiday when celebrants “play.”

Originally, Holi’s hues came from plant sources: Green was made from ground neem leaves (Azadirachta indica), and yellow and red came from turmeric (Curcuma longa), Rajamathi explains. A popular spice, turmeric is bright yellow at neutral pH thanks to the molecule curcumin. When treated with a base, such as calcium hydroxide (also known as lime), curcumin turns red. Other plant-based colors, used either as pastes, as powders, or in water, included henna leaves as another shade of green; marigolds or chrysanthemums as yellow; flame of the forest (Butea monosperma), pomegranate, or red sandalwood as red; indigo as blue; and charcoal as black.

In modern times, with more sophisticated synthetic chemistry, the colors became brighter—and in some cases more toxic. Some of the more benign, modern Holi colors, called gulal in Hindi when made in powder form, are a mixture of more than 95% cornstarch blended with food-, drug-, and cosmetic-grade dyes. These pigments, known as FD&C colors in the U.S., are the same ones that bring a rainbow of colors to candy.

“Modern synthetic chemistry has shown that a lot of colors are available for pretty cheap prices,” Rajamathi says. But there is still a cost. Though it is hard to pin down the extent of the problem, some Indian powders may contain toxic, metal-based pigments, such as copper sulfate, mercury sulfide, chromium iodide, lead oxide, and aluminum bromide. Or they may be made from potentially hazardous industrial pigments designed for paint or dye applications, including malachite green, methyl violet, auramine O, and rhodamine B.

What’s more, the powder base in some cases is the mineral talc, or possibly even asbestos. Mica granules or ground glass may be added for shine. To make pastes, Rajamathi says, sometimes the colors are dissolved in used engine oil.

One report from a dermatology clinic in India detailed skin lesions, burning, and eye irritation among health problems resulting from playing Holi—perhaps from the chemicals in these preparations (Indian J. Dermatol. 2009, DOI: 10.4103/0019-5154.55632). But contamination of the cornstarch or flour that forms the powder base could also contribute to reactions, the authors note.

As awareness about poor-quality colors has spread, so has demand for safe colors—including a return to plant-based Holi colors. At the Council of Scientific & Industrial Research’s National Botanical Research Institute in Lucknow, India, a team developed herbal gulals that are now in commercial production. Online recipes also offer methods for making your own plant-based preparations.

Not so long ago Holi was relatively unknown in Western countries, but in recent years the festival has migrated globally. Holi is now played on many college campuses in the U.S., and Holi-inspired running races and fundraisers use the colors in their events.

As Holi celebrations took root in Germany in recent years, Katrin Bossmann and colleagues of the German Federal Environment Agency tested four Holi powders to understand their particles better (J. Occup. Med. Toxicol. 2016, DOI: 10.1186/s12995-016-0130-9). “When you throw the powder in the air it comes down very slowly, and it looks very nice,” Bossmann says. But this is an indication that it might have high concentrations of particles under 10 µm, one regulatory threshold below which lung penetration and health effects become a concern. Indeed, the team’s study showed that 40–80% of the particles in the four powders it tested had diameters under 10 µm. The particles also triggered inflammatory responses in cell culture.

In addition, one powder the group tested that was based on natural dyes tested positive for mold. J-D Mallder, head of research and development for Utah-based Chameleon Colors, a manufacturer of Holi colors, notes that he has also seen mold contamination in samples from other suppliers. Some colors require water for processing, he says, and if they are not dried quickly, mold can grow.

Mallder would love to sell more natural dyes, he says, but he hasn’t been able to find buyers. Natural colors have a shorter shelf life, he says. They will fade in sunlight within a day. Still, they aren’t necessarily faint. “I have a dark pink, an orange, and a yellow that I’m very happy with,” he adds. Natural blue and green are nearly impossible to do vibrantly, he points out, because they come from expensive spirulina algae, and about 10 times as much material is needed for blending into starch to achieve the same brightness seen in an FD&C synthetic dye.

Even given her team’s findings that Holi powders might raise some health concerns, Bossmann says most people can go and enjoy the Holi festival. “You attend them once or twice a year, and mostly these are healthy young people” taking part, she says. Mallder’s company advises treating the colors like they would dirt. “Do you want to breathe in dirt or get it in your eyes? No.” Chameleon Colors encourages people to protect their eyes and limit inhalation when using the product, Mallder adds. “We want people to feel safe and be safe.”

Food
Chemistry in Pictures: Really, really red lentils
Pharmaceuticals
What’s sunless tanner, and how does it impart that faux glow?
Analytical Chemistry
Luminescent nanoparticles leave a glowing fingerprint
Share X
To send an e-mail to multiple recipients, separate e-mail addresses with a comma, semicolon, or both.
Title: What are Holi colors, and what gives them such vibrant hues?
Author: Jessica Marshall
Chemical & Engineering News will not share your email address with any other person or company.