Credit: Matt Davenport/C&EN
As part of a revamped introductory chemistry course at MSU, teaching assistants are positioned throughout the lecture hall to facilitate discussion and answer questions.

Ask Nicholas Heelan about his first pass at intro-level college chemistry or about his professor, and he’ll tell you, “It was really bad. He would just talk and talk, and there wasn’t much interaction.”

Fast-forward one year, after giving Michigan State University’s version of the class a try, and he’s emphatic: it was so. much. better.

“It was interactive. We could talk to the people sitting next to us. It’s not like learning facts. It’s more like common sense, or reasoning,” the 20-year-old says, knee-deep in his second semester of general chemistry and thinking he’ll major in biochemistry.

This is music to Melanie Cooper’s ears. Her chemistry education program at MSU is one of many that subscribe to active learning, a mode of teaching that emphasizes student participation over lecture alone. But Cooper, a chemist herself, and her team wanted to go deeper. Active learning, she says, focuses too much on how faculty teach and not enough on how—and what—students are learning.

The chemistry faculty overhauled the first-year curriculum, drawing from a surprising, but logical, source—a national framework for K–12 science education. The team’s rationale for building a chemistry curriculum from best practices in high school science education was straightforward: students’ brains don’t suddenly shift how they learn between the end of high school and the beginning of college, and yet the way that students are taught and tested often abruptly does.

MSU is starting to see the impact of this shift. In the first three years of the CLUE (Chemistry, Life, the Universe, and Everything) curriculum, test scores have gone up. The dropout and fail rate has fallen. And attitudes toward the class are much like Heelan’s—students are more confident and seeing the connections in concepts from one scientific discipline to another (Sci. Adv. 2018, DOI: 10.1126/sciadv.aau0554).

“It’s not that lecturing is bad,” Cooper says, but “I think we have a more ambitious goal for these students.” MSU wants to change the base knowledge that students leave with and influence what they go on to do

Here’s how it works.

Despite the early hour and the crappy weather, Amy Pollock’s class is full. Today, they are talking about Lewis structures. She lectures to the cavernous room, then breaks and tells the students to draw a Lewis structure. Students turn to each other to check their work. Teaching assistants, who are advanced undergraduates and graduate students, pace the aisles, answering questions and guiding discussion. The class reconvenes. They talk about their answers, and Pollock goes on.

It’s loud and a bit chaotic, but even in a class of several hundred students, this kind of teaching works, says Robert Beichner, a retired physicist at North Carolina State University who is often credited with mainstreaming active learning.

“The idea is that you get the students to teach each other,” he says.

And what the students are teaching each other today is arguably a core principle of chemistry, the basics of bonding and energetics. Core ideas are one of the three parts of the curriculum outlined in A Framework for K–12 Science Education, and they are one of the three dimensions considered in building the CLUE program, Cooper says. The other two dimensions are crosscutting concepts, those ideas that span multiple scientific disciplines, and scientific practices, the way professional scientists and engineers actually do their work.

After overhauling its introductory chemistry course, MSU saw a steady increase in mean student grade and a continual decrease in the number of students who got a D or F or who withdrew. 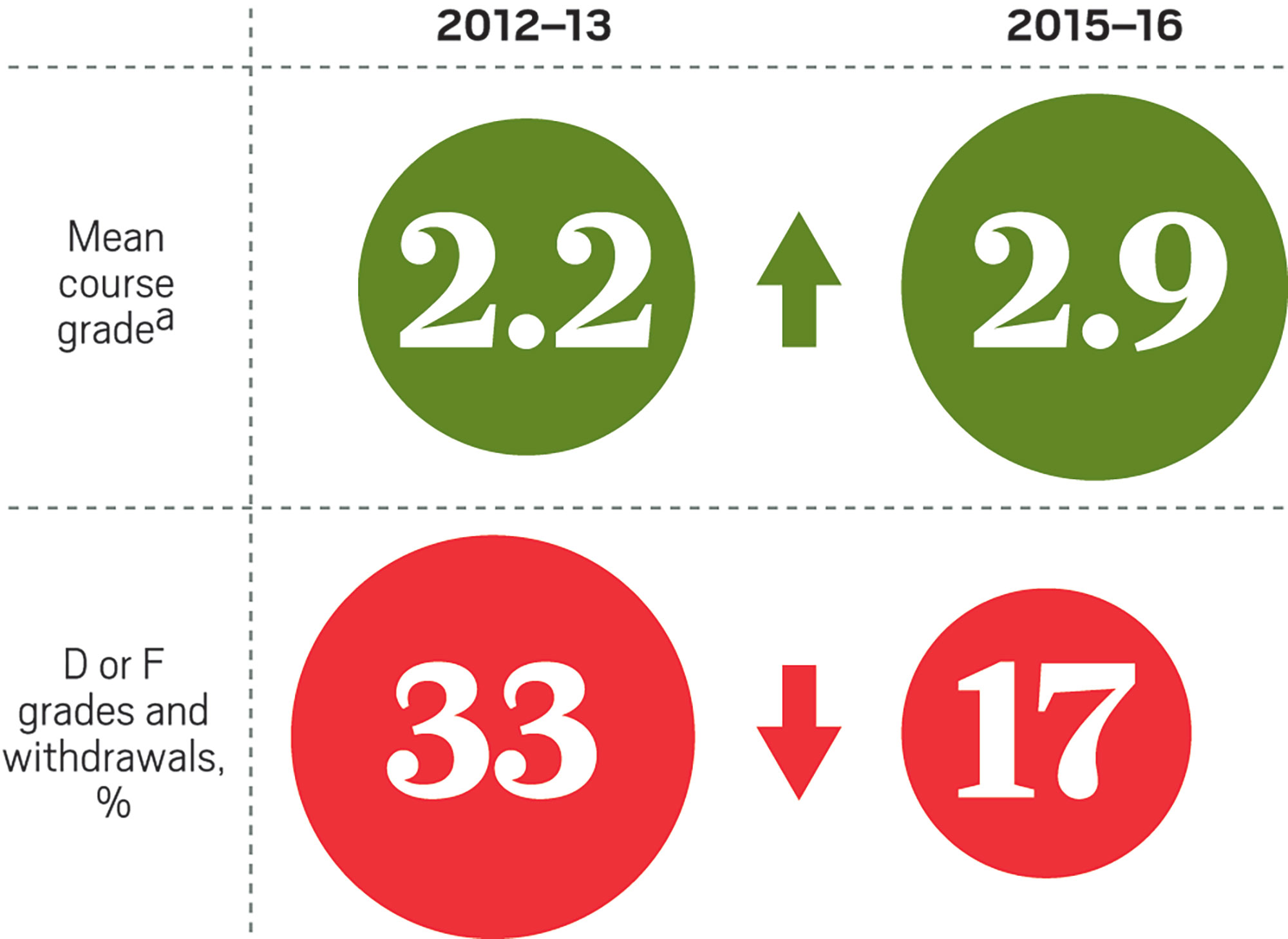 What the changes look like for MSU students, says Rebecca Matz, a chemistry education expert who led the assessment of the first years of the CLUE program, is this: In the previous curriculum, a particular lesson would have students calculate the energy change of a reaction as a stand-alone exercise. In the new class, students instead focus on understanding what lies beneath the equation. They draw bonds breaking and forming to show where energy comes and goes.

“What you want them to know is that it takes energy to break bonds. They are also then connecting that back to the core idea—bonding and interactions,” Matz says. “If you can’t connect it to the core idea, you’re not likely to remember it.”

Labs are no longer “recipes” where students fill out data sheets and follow a set experimental design. In the new curriculum, students get a problem—for example, says Cooper, if the question is ‘How do you extract caffeine from something?’ the students would get a few samples of things with caffeine in them and spend their time figuring out which extraction method gives the best or purest yield or is most efficient. This is actual scientific practice, Cooper says.

With changing the curriculum, Matz says, the department had to change exams to reflect what the students were learning. Multiple choice is now saved for class time, when students can answer questions live via a “clicker” device. Exams instead predominantly test conceptual understanding rather than facts or mathematical calculations.

“Do these exams measure knowledge versus knowledge use?” Matz asks. “If we do rote math problems or a factual recall of skills, we aren’t changing anything.”

To measure whether the curriculum was having a quantifiable impact on education, Cooper, Matz, and their team looked at exam scores and dropout and fail numbers. They watched videos of classes being taught to see how instructors were approaching the material. They checked exams to see if questions were truly reflecting the three dimensions of the framework. This way, they could also assess educator buy-in, a critically important component of changing the way a large survey course is taught.

From 2012–13 to 2013–14, the year after the new curriculum was installed, the mean final grade in the first of the program’s two survey classes went from 2.2 to 2.6 on a 4-point scale. By the third year of CLUE, the mean grade was 2.9. The study included data from some 4,600 students per year. And the rate of students who fail or drop out of the class fell, from 33% in the last year of the old curriculum to 17% in year 3 of the new version.

What MSU sees in data yet to be published is that these students are going on to organic chemistry and other science courses, and doing well, Cooper says.

“There’s no sudden mass failure,” she adds. “What we have also seen is that students are starting to make connections across biology and chemistry.” How structure and function are related in molecules is important to both chemistry and biology, and the students appreciate the similarities.

But what happens after college? Beichner points to surveys saying that employers want students who are critical thinkers and problem solvers from day 1 and that employers think colleges and universities aren’t doing a good enough job of producing these students.

Cooper and Matz specifically refer to a 2012 report from the US President’s Council of Advisors on Science and Technology lamenting a lack of science, technology, engineering, and mathematics (STEM) graduates, with a call to graduate 1 million more students with degrees in chemistry, biology, physics, and other fields by 2022, as one of their motivations in revamping MSU’s chemistry curriculum.

The Association of American Universities, which funded MSU’s effort through its Undergraduate STEM Education Initiative, also gives a nod to workforce development in its rationale for supporting change in entry-level coursework. The initiative, which has also funded seven other schools to take different approaches to improve engagement in science teaching, reports that five years in, similar to what Cooper and Matz report, failure rates have dropped and retention in STEM classes has improved.

This bodes well, Quinn says, but she cautions that for some schools, the cost of building and rebuilding STEM curricula might be too much and that lecture courses, like the one Heelan took, for all their flaws, may be the default economic reality.

All the more reason to continue to gather data on how active learning and projects like MSU’s affect professional choices and employment, Beichner says. Employers tell him that active learning yields collaborative workers, but it’s not clear whether the shortage that has motivated some of this educational change of late is being alleviated.

For students like Heelan and Caden Beurkens, who also completed the first semester of introductory chemistry in the fall at MSU, jobs are still in the distance. Mostly, they are reveling in how much they actually enjoyed a class that so many young college students seem to dread.

“Honestly, now that I feel like I have a decent base of knowledge, I’m not going to struggle,” says Beurkens, 18, a budding plant biologistwho is looking forward to organic chemistry. “I welcome it.”

Comments
kiers (January 30, 2019 9:40 PM)
I wish i had the benefit of this collaborative approach, when I was in school learning. During my time it was "do it urself". HORRIBLE way to learn. simply horrible.
Reply »

Julie Stenken (February 7, 2019 10:02 AM)
The article does not say what resources were used for this change. How many TAs are there in the classroom per say 50 or 100 students? Have the number of TAs in the course remained the same before and after the change in curriculum? How large are the classes? Are the actual exams open-response? If so, who grades them? Or are the exams multiple-choice with more conceptual rather than mathematical questions?
Reply »

Megha Satyanarayana (February 8, 2019 1:22 PM)
Hi Julie: Because stories you see here also appear in our print magazine, we don't have room for some details. Some of the papers that this story links to should answer some of your questions. Otherwise, your best bet is to contact Dr. Cooper at Michigan State. Thank you for reading.
Megha
Reply »

AOG (February 24, 2019 12:47 AM)
Oh no... I SO MUCH prefer learning individually, and loved STEM for holding the high standards bastion among the mass hysteria of tapping newbies' "wisdom". Dunning–Kruger effect is a reality! Now even STEM education starts to turn into kindergarten. I am crying.
Reply »