by Katherine Bourzac, special to C&EN﻿

Credit: ACS Appl. Mater. Interfaces
These micrographs show the resulting porous catalyst structure when carbon-, nitrogen-, and iron-containing materials are ignited in a variation of the pharaoh’s snakes reaction.

A recipe for better electrocatalysts takes inspiration from an ancient reaction used in fireworks, known as the pharaoh’s snakes. With heat and the foaming power of baking soda, a simple mix of ingredients can be turned into a high surface area, nanostructured catalyst for oxygen reduction in fuel cells and zinc-air batteries (ACS Appl. Mater. Interfaces 2018, DOI: 10.1021/acsami.7b16936).

Fuel cells offer a cleaner alternative to the combustion engine, electrochemically converting fuels into electricity, emitting only water and carbon dioxide in the process. Adoption of fuel cells has been hampered, in part, by the expense of the platinum-carbon catalysts used to facilitate the oxygen reduction reaction at the fuel cell cathode. The cost of the platinum accounts for about half the total price of a fuel cell. So chemists have been working for many years on alternative catalysts made of less expensive materials.

Nanostructured iron-carbon-nitrogen catalysts are a promising alternative, but not yet up to the task. “The stability is a problem, and performance rarely exceeds that of platinum,” says Liming Dai, who develops carbon nanomaterials at Case Western Reserve University. Hoping to improve their performance, chemists have been toying with the structure of these catalysts to maximize their total surface area and the exposure of active sites. One way to achieve this is with highly porous materials, which also allow electrolytes and reactants to move freely, making such materials good candidate catalysts.

Dai’s collaborator Ying Zhu, a chemist at Beihang University, wanted to try a new way of making a highly porous iron-carbon-nitrogen catalyst. Zhu was inspired by a YouTube video demonstrating the pharaoh’s snake, which she found to be an “amazing chemical reaction.” When a small mound of mercury thiocyanate powder is ignited, a series of reactions releases large amounts of gas, and the material forms elongated foamy ropes that rise from the flames on the reaction surface like snakes rearing their heads. The resulting “snake” material is a highly porous carbon nitride impregnated with toxic gases. Mercury thiocyanate is toxic, and the reaction produces gases including cyanogen and mercury vapor, so it’s no longer sold as a firework—but can produce an impressive display in a fume hood.

“Inspired by the ancient chemical reaction, we aimed to find safe and cost-effective materials for producing carbon foam for electrocatalysts,” Zhu says. Other versions of the reaction use sugar and baking soda—more kid-friendly ingredients. Zhu was inspired to adapt the reaction to nitrogen-, carbon-, and iron-containing catalyst precursors, with baking soda as a non-toxic foaming agent. To make their catalyst, Dai and Zhu ignited a combination of melamine (the nitrogen source), iron nitrate, sugar (the carbon source), and baking soda, which they expected would cause the material to foam as in the pharaoh’s snakes reaction. Indeed, the material grew into a snaky rope as it burned. They annealed the resulting material at 1000 °C to convert the carbon structures within from amorphous to crystalline forms, so that it would conduct electricity well.

The researchers crushed the catalyst and used it to make a fuel cell and a zinc-air battery. A methanol fuel cell built with the pharaoh’s snake catalyst operated at 0.9 volts, slightly better than platinum-catalyzed fuel cells. The group also tried the material in a zinc-air battery, which is powered by oxidizing zinc—and which is also stymied from commercial use because of expensive catalysts, typically ruthenium dioxide. Dai says the new material functioned comparably to ruthenium dioxide.

The catalyst material is made of carbon sheets and nanotubes doped with iron and nitrogen, with a large surface area providing plenty of exposure for catalytic sites, electron microscopy revealed. Other spectroscopy measurements showed that the material contains different types of active sites, including iron-nitrogen and nitrogen-carbon bonds.

Jean-Pol Dodelet, who develops catalysts at the National Institute of Scientific Research in Quebec, says the high degree of porosity of Dai and Zhu’s catalyst is an advantage. However, he says, the most important challenge in research on platinum-free electrocatalysts is not just to outperform the precious metal, but to do so in acidic solutions. Dai and Zhu’s catalyst beats platinum in an alkaline solution, but mature fuel-cell designs—such as those found in hydrogen vehicles—use acidic electrolytes. In acidic fuel cells, says Zhu, platinum-carbon catalysts still work better than the group’s snake material. 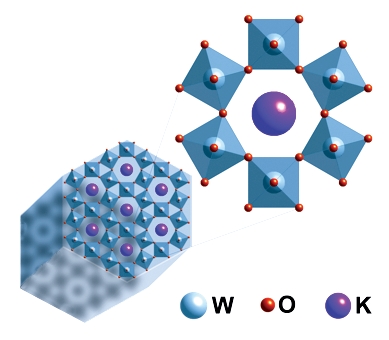