Credit: Yuhe Liao
Birch chippings can be processed into phenol, propylene, and other useful chemicals in a proposed biorefinery.

As the chemical industry seeks more sustainable processes, many researchers believe that using plants as an alternative source of chemicals could help curb carbon dioxide emissions and reduce the world’s dependence on oil and gas.

To become economically viable, the biorefineries producing these renewable chemicals will need to squeeze as much value as possible from plants. But plant matter can be frustratingly intractable, with components like lignin that are difficult to convert into useful molecules.

Researchers in Belgium have now developed an integrated series of chemical processes that can break down lignin and turn 78% of the mass of birch wood into chemical products including phenol, propylene, and ethanol (Science 2020, DOI: 10.1126/science.aau1567). The team, led by Bert F. Sels at KU Leuven, has demonstrated the method at lab scale, and their calculations suggest that a full-scale biorefinery would have a much lower carbon footprint than fossil-based production systems, while also being cost competitive.

“It’s pretty exciting to show the whole process end-to-end,” says George W. Huber at the University of Wisconsin-Madison, who studies biomass conversion to fuel and chemicals. “Everybody says you can make phenol from lignin, but nobody actually has before in any appreciable yields.”

Plant cell walls are mainly composed of lignocellulose, a tangled mixture of lignin, cellulose, and hemicellulose. Lignin makes up 20–30% of the dry mass of wood and is a complex jumble of different polymers formed from substituted phenols that is challenging to refine into more valuable products. Most of the lignin currently extracted from plants is burned to generate electricity.

To make better use of lignin, the KU Leuven researchers exploited a tactic called catalytic funneling, which transforms a complex mixture of molecules into a smaller number of simpler compounds.

In the first stage of the process, the researchers mix wood chips, methanol, high-pressure hydrogen, and a ruthenium catalyst at 200–250 ºC to deliver three products. The first is a carbohydrate pulp that can be processed and fermented into ethanol. The second is a blend of lignin oligomers, which can be used as a substitute for p-nonylphenol, a compound used in printing inks.

The third output is a mixture of lignin monomers, such as 2-methoxy-4-propylphenol and 2,6-dimethoxy-4-propylphenol. The team developed a gas-phase process using a nickel catalyst to rip methoxy groups from these monomers at 250–300 ºC, providing propylphenols and ethylphenols. It also produces methane, which is routed into an incinerator along with other waste gases to supply the biorefinery with heat.

Finally, the alkylphenols react with steam at 350–400 ºC over a zeolite catalyst developed by the group. The catalyst snips off the alkyl groups to produce phenol, propylene, and a little ethylene. “What we demonstrated here for the first time is that you can bring that complex mixture of monomers fully into phenol,” Sels says.

The team built a computational model of a biorefinery based on these processes and calculated that 1,000 kg of wood would produce 653 kg of carbohydrate pulp, 64 kg of lignin oligomers, 42 kg of phenol, and 20 kg of propylene. Given the value of these products, the team’s economic analysis suggests that a plant producing 100,000 metric tons of phenol per year would pay back its construction costs in four years. It would also consume about 2.4 million tons of wood per year, similar to the scale of a large pulp and paper mill.

“I think it’s really exciting research,” says Katalin Barta at the University of Graz, who works on lignocellulose utilization. “It combines basic scientific discovery and practicality.” This kind of comprehensive techno-economic analysis is still relatively unusual in sustainable chemistry, she notes. “But it’s really important because if we want to switch from petroleum to renewables, we have to show that it’s economically viable.”

A life-cycle assessment showed that producing phenol in this biorefinery would generate less than one-half of the CO2 emissions of a conventional fossil-fuel-based process, and the propylene produced would create less than one-third of the usual CO2 emissions. “Biobased propylene is very hard to make from sugar, so by taking this approach it really opens up a very attractive opportunity,” says Dirk den Ouden, vice president of biorefineries at Stora Enso, a biomaterials company headquartered in Helsinki.

The researchers also calculate that if the hydrogen used in the process were produced from non–fossil fuel sources using renewable energy—by solar-powered electrolysis of water, for example—then the whole biorefinery could lead to a net reduction of CO2 in the atmosphere.

Sels’ team has developed a road map to take this technology to industrial scale and is now building a 100–150 L demonstration plant. “If everything goes well, we will be operational likely beginning of next year,” he says. 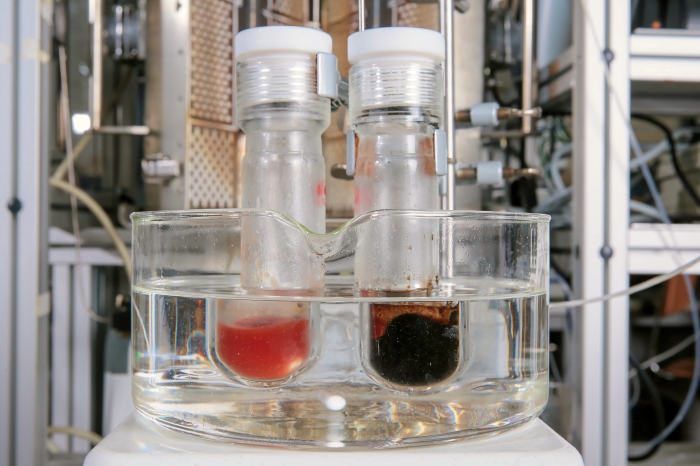 Share X
To send an e-mail to multiple recipients, separate e-mail addresses with a comma, semicolon, or both.
Title: Biorefinery turns birch wood into renewable chemicals
Author: Mark Peplow, special to C&EN
Chemical & Engineering News will not share your email address with any other person or company.