by Jean-François Tremblay, special to C&EN

Enabling most of the world’s technological advances, microchips are an ode to the ingenuity of electronics engineers. In the future, however, those engineers will become increasingly dependent on materials scientists. As circuits get thinner and thinner—below 1 nm within a few years—creative materials scientists will be called on to play a role in enabling further technological advances.

“Many of the technical challenges in semiconductor manufacturing can be overcome by material innovation,” said Dongjun Lee, a researcher and vice president at the chipmaker SK Hynix, at a recent event in Seoul, South Korea. “Some of the materials we use now, they will not work on the smaller nodes,” he said, referring to future generations of microchips with even smaller circuit lines. Lee was speaking at the Strategic Materials Conference Korea, an annual event hosted by Semi, an association for chip designers and manufacturers.

Operating in an industry that is notoriously cyclical, manufacturers of materials used to fabricate computer chips have grown adept at coping with the unexpected. But so far, they have worked in the shadows of their customers, chipmakers like Intel or Samsung that often take the contributions of materials firms for granted. Materials suppliers are now moving to the forefront as chips require closer collaboration between materials firms and their customers.

For many years, some of the world’s largest chemical companies have run labs dedicated to the discovery, development, and formulation of materials used to manufacture microchips. Going forward, their customers will require additional investment not only in R&D facilities but also in automated quality-control systems.

It is a trend that favors larger materials suppliers and partly explains recent mergers such as the one between Dow and DuPont, which combined the electronic materials businesses from both firms under the new DuPont.

Other recent examples include the announcement in April that Merck KGaA, already one of the world’s largest manufacturers of electronic materials, would acquire Versum Materials, another large firm. Entegris, which was also bidding to buy Versum, said it would buy Digital Specialty Chemicals, a maker of organometallic precursors used to deposit thin films during semiconductor fabrication. And in November, Cabot Microelectronics completed its purchase of KMG Chemicals, a producer of ultrapure chemicals.

More new materials than ever are needed for making semiconductors as circuits become smaller, forcing manufacturers to reinvent both how chips are made and what they are made of. For almost 20 years, or since the size of circuit lines shrank below 25 nm, modern processors have featured fin field-effect transistors, or FinFETs. One of the main characteristics of FinFETs is that, when built on the surface of the silicon substrate, they are tall relative to their width and, as a result, look like fins.

The FinFET design still has a few years left in it as the semiconductor industry shrinks circuit lines down to around 3 nm, said Naomi Yoshida, an R&D director at Applied Materials who spoke at the Seoul meeting. Applied Materials manufactures equipment used to deposit chemicals during chip making.

But in a few years, the industry will likely move to completely new ways to design circuitry. One of the most promising circuitry architectures, Yoshida said, is gate-all-around FET, a design that IBM, Taiwan Semiconductor Manufacturing Company (TSMC), and other major chip manufacturers have been researching for years. In a gate-all-around FET, as the name indicates, the logic gates are located around the transistor instead of between the current’s source and the drain.

In her lab, Yoshida has shrunk chip circuits down to 2 nm. At that scale, she and her team found, preventing unwanted electrical leakage will require a different barrier material than titanium nitride, which is currently the main choice. Another consequence of shrinking circuitry to 2 nm and below is that copper, the metal now used to connect transistors, will no longer do. Cobalt will replace copper, Yoshida predicted.

Copper is just one of several materials that chip fabricators will soon replace. Over the next few years, they will also gradually phase out the silicon in FinFET designs as the fins get increasingly thin and fragile, predicted Dennis van Dorp, a senior scientist at Imec, a research consortium based in Leuven, Belgium. He flagged silicon germanium as a likely replacement material. And new cleaning materials will be needed to rinse the surface of the silicon substrates to remove impurities that lodge themselves between the transistor fins, he added.

It’s not only microchips that are driving demand for new materials in the electronics industry, said George Barclay, global business director for lithographic technologies at DuPont. Cars, for example, feature a growing quantity of increasingly small sensors. “There will be an explosion in devices that will create a need for new materials,” Barclay predicted.

As the pace of introduction of new materials in microchips and other electronic devices accelerates, suppliers will increasingly have to test how these materials interact with each other, Laura Matz, vice president of planarization at Versum, said at the meeting. The continued prosperity of the industry, she said, demands closer collaboration among all players along the manufacturing chain. Chipmakers, who often hold information close to their chests, should communicate to their suppliers what other materials are being introduced in the fabrication process, Matz warned.

Materials science created the chips behind new technologies like artificial intelligence and big data, Matz said. Materials suppliers in turn stand to gain from using AI and big data in their manufacturing processes, she added. If sensors linked to computers can remotely monitor the health of a patient in real time, similar technology can be deployed to monitor the manufacturing systems of chemical firms, she said.

Using AI to monitor production in real time isn’t just a lofty goal that materials suppliers are advised to pursue. It’s about to become a requirement from buyers, SK Hynix’s Lee said. He noted that chip manufacturing at his company is entirely automated, an approach that removes the possibility of human errors.

“When we moved to full automation, there was resistance, partly because of cost,” Lee said. “It took us about 10 years to achieve.”

Today, Lee said, sensors monitor every aspect of production in real time. The vast amount of data generated enables predictive systems that can calculate how a change in a raw material formulation affects quality and yields. The predictive systems are so powerful, he said, that they can even automate R&D by suggesting which materials will work best. “Artificial intelligence is more efficient than relying on an engineer’s intuition,” he said. 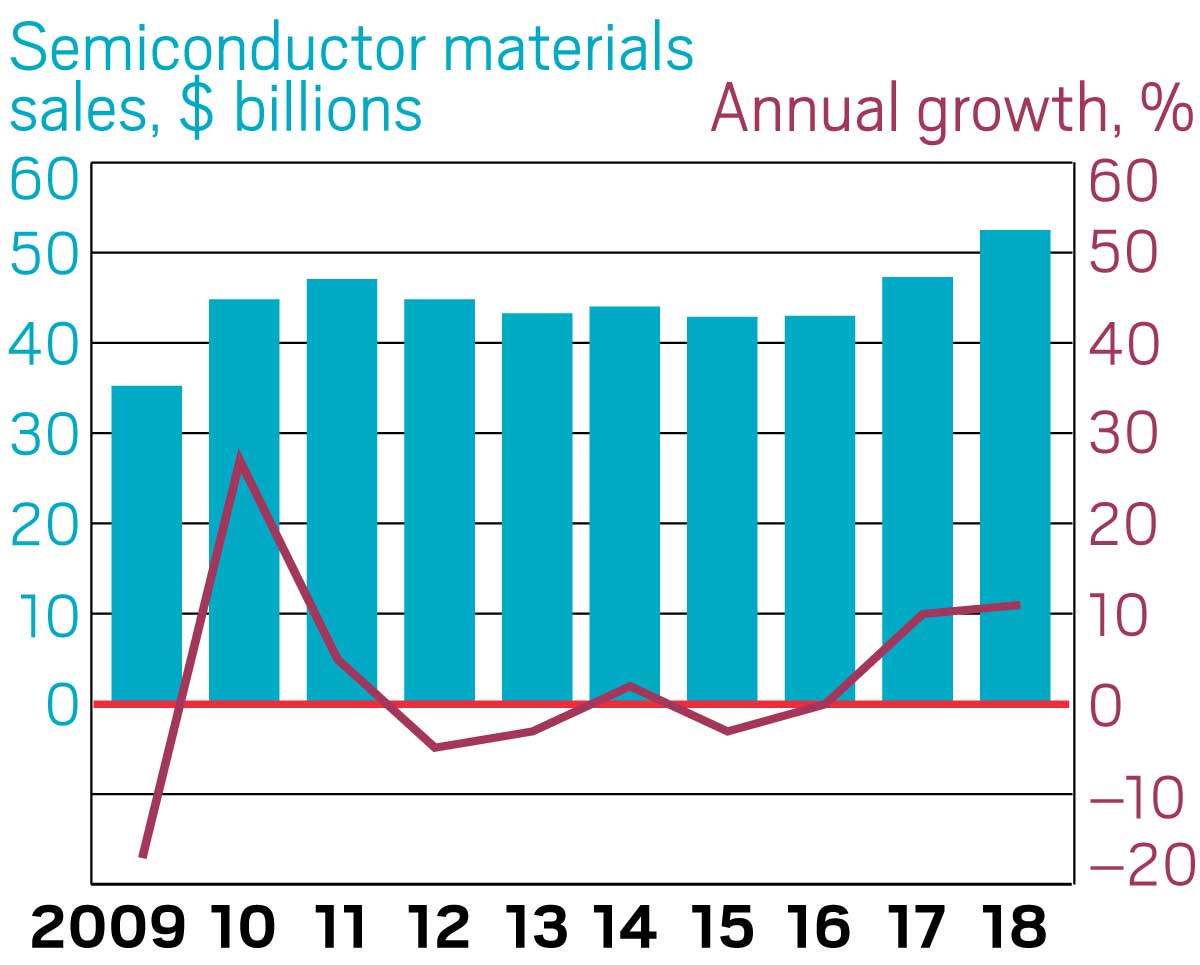 Lee urged materials suppliers to automate to improve the quality of their products. “Many chemical suppliers haven’t yet moved to full automation,” he said. “But we have to monitor production in real time to know of problems as they happen.”

Faulty materials can be a source of huge losses to chipmakers, said Sueryeon Kim, a manager of the memory materials technology group at Samsung Electronics. In recent years, she noted, Samsung has encountered several cases in which errors caused by a materials supplier reduced manufacturing yields.

It’s an industry-wide challenge. Earlier this year, a faulty photoresist supplied by an electronic chemicals maker forced TSMC to scrap large quantities of silicon wafers, leading to a drop in quarterly sales of about $550 million.

Kim urged suppliers to be open about quality problems, noting that “if the costs to you are significant, maybe we can help to pay.” In any case, she said, failure to communicate a quality issue is foolish because chipmakers are able to quickly trace back the source of a manufacturing problem.

Suppliers, Kim said, should also inform chipmakers like Samsung when they become aware of a technology that has the potential to increase manufacturing yields. “You know your business better than we do,” she said. “If new filters might increase yields, we are interested to learn about these new filters.”

Large materials suppliers like DuPont have always tended to collaborate closely with their customers in the semiconductor industry, according to DuPont’s Barclay. He said that recently, however, the level of cooperation has become even greater.

This, he said, may be related to the huge size of DuPont compared with most other suppliers of electronic materials. The combining of Dow’s and DuPont’s electronic materials businesses in DuPont created an industry behemoth in terms of R&D, product range, and manufacturing footprint.

“It’s good to have size,” Barclay said. DuPont, he noted, operates a large electronic materials R&D center in South Korea. And the firm is implementing predictive systems in its facilities to better ensure quality. “We are developing ways to use the data,” he said. More and more, he said, DuPont is deploying dynamic control systems to automate manufacturing.

The growing importance of materials to chipmakers is a trend that favors the largest, best-financed firms, said Andy Tuan, managing director for Asia at the electronic materials consulting firm Linx Consulting. “Big material manufacturers increasingly derive power from being the only ones able to invest in cutting-edge R&D,” he said. For example, extreme-ultraviolet-light scanners, priced at more than $100 million apiece, are beyond the budget of most producers of photoresists.

“The equipment required, the cost of developing materials, is becoming very high,” Tuan said. Through mergers and acquisitions, the top electronic materials suppliers are now larger than ever, helping tip the balance of power in their relationships with their customers, he said. “The big companies like Merck and DuPont are getting really big. So they will be harder to push around.”

Jean-François Tremblay is a freelance reporter based in Hong Kong.

Share X
To send an e-mail to multiple recipients, separate e-mail addresses with a comma, semicolon, or both.
Title: In the electronics industry, materials take center stage
Author: Jean-François Tremblay, special to C&EN
Chemical & Engineering News will not share your email address with any other person or company.