The Nobel Prize in Physiology or Medicine often goes to research that has inspired or is on the cusp of spawning therapeutics, and the 2019 prize, awarded to William G. Kaelin Jr., Sir Peter J. Ratcliffe, and Gregg L. Semenza, is no exception.

The three researchers are credited with figuring out the intricate details of how our bodies sense oxygen-- and Semenza tells C&EN that pharmaceutical and biotech firms are eagerly developing medicines that target different parts of this mechanism, especially to treat diseases like cancer and anemia.

HIF-1 has been a hot drug target in the decades since this year's Nobelists made key discoveries in how cells sense oxygen. 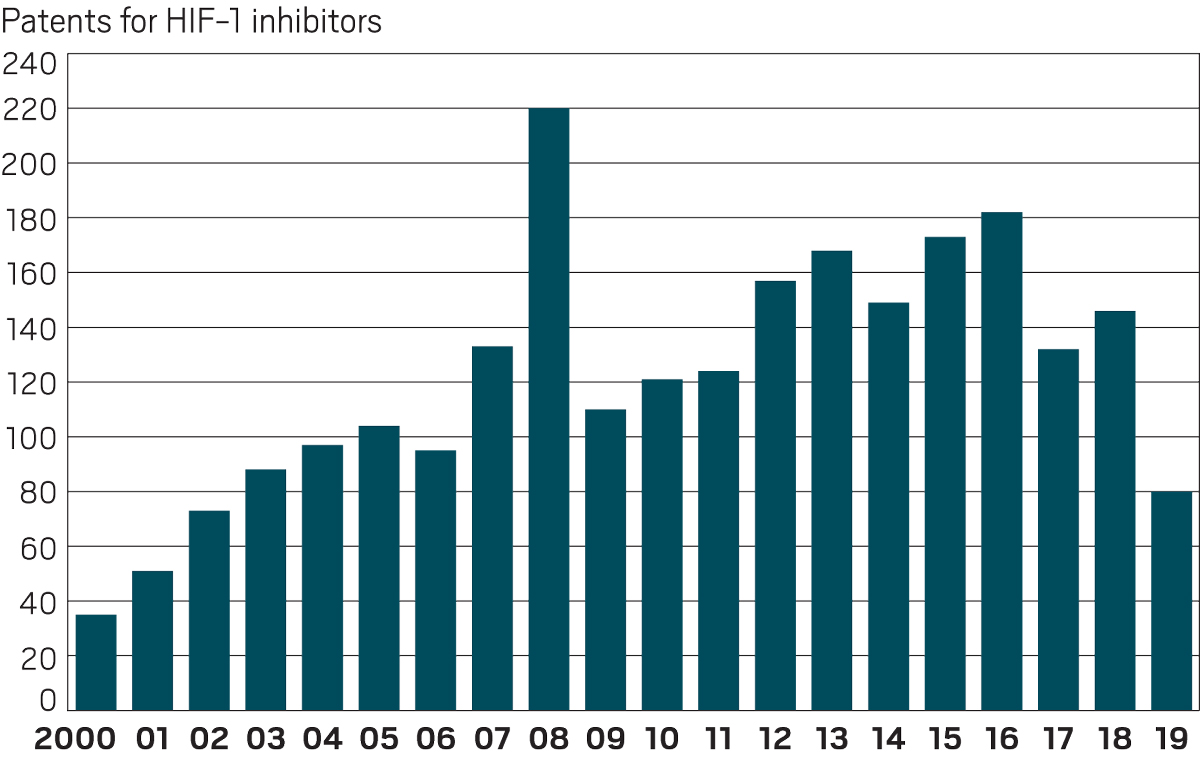 At the center of this oxygen-sensing system is a transcription factor called HIF-1α, which Semenza discovered in 1991. Under normal oxygen conditions, HIF-1α is broken down by enzymes called prolyl hydroxylases and a protein called von Hippel-Lindau –interactions discovered by Ratcliffe and Kaelin. But when oxygen levels are low, as in diseases like cancer and stroke, the prolyl hydroxylases don’t work, driving HIF-1α into the nucleus. There, the transcription factor enhances the production of erythropoietin, a hormone that boosts production of oxygen-carrying red blood cells.

Cancer cells hijack this mechanism to bring oxygen and nutrients to support their growth. This makes HIF-1α an exciting but challenging drug target – transcription factors do not always have obvious places for small molecules to dock. Since 2000, industry and academic researchers have filed nearly 2,500 patents for small molecule inhibitors of HIF-1α, and at least one clinical trial has looked at antisense technology to try and thwart it in liver cancer. But so far, no direct inhibitors have reached the market.

Companies have had better luck targeting HIF-1α indirectly. For example, Pfizer’s renal cell cancer drug Torisel lowers HIF levels by blocking mTor. And Semenza notes that several prolyl hydroxylase inhibitors are in late stage clinical trials to treat anemia, in which red blood cells are killed off. Those include GSK’s daprodustat and Akebia’s vadadustat. And in May, Merck offered up to $2.2 billion to buy Peloton Therapeutics, which has clinical-stage drugs for kidney cancer targeting another member of the HIF family, HIF-2.

Share X
To send an e-mail to multiple recipients, separate e-mail addresses with a comma, semicolon, or both.
Title: 2019 Medicine Nobel research fuels drug discovery efforts
Author: Megha Satyanarayana
Chemical & Engineering News will not share your email address with any other person or company.