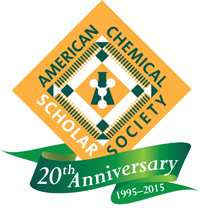 The program awards renewable scholarships of up to $5,000 per year to underrepresented minority students who want to enter chemistry or chemical engineering or related fields such as environmental science, toxicology, and chemical technology.

As part of the 20th anniversary celebration, C&EN is launching a series of profiles of current and former ACS Scholars.

The profiles will run in the last issue of each month. Annette Raigoza
An undergraduate professor sparked this ACS Scholar to switch majors, leading to a career in academe John G. Florez
Chemical engineering has taken this ACS Scholar around the world to encourage others to take up STEM educationr