IN 2015, Antonis Papadourakis had an interview for one of the biggest job opportunities of his life.

Papadourakis met with Lanxess AG CEO Matthias Zachert and board member Rainier van Roessel to discuss becoming the president and CEO of Lanxess Corporation in North America. Lanxess was completing a restructuring process to make the business more efficient and competitive. Zachert and van Roessel laid out an ambitious strategy for the years ahead. The Germany-based chemical manufacturer would grow in midsize, specialty chemical markets that are less variable due to economic cycles or seasonality and have higher profit margins. The company would focus primarily on the growing North America and Asia markets. Lanxess would execute this growth both organically and through acquisitions.

Papadourakis was sold. “I wanted to be a part of it,” he says. He had a lifetime of indispensable experience in the chemical industry, and he felt he had an opportunity to add value by bringing that experience to Lanxess.

Born in Athens, Greece, in 1957, Papadourakis pursued chemical engineering at the University of Thessaloniki, knowing that chemical engineers faced the most difficult entrance exam and relishing the challenge. He followed with a Ph.D. from the University of Massachusetts, Amherst. He was offered a job at the specialty chemical manufacturer Rohm and Haas, which he took after completing his military service in Greece.

Lanxess is also focusing on innovation—not just in products, but also in processes.

Being open to change and taking risks were critical to the career growth that came next, Papadourakis says. After beginning his career in engineering, he had the opportunity to take a position in purchasing and procurement with Rohm & Haas U.K., so he moved to London in 1997, now with a wife and three young children. He returned to the United States in 2005, taking management roles at Engelhard Corporation (now BASF), Arkema, and then Altuglas International (a subsidiary of Arkema).

Papadourakis honed his leadership style by observing others—learning from people he wanted to imitate as well as those whose behavior he wished to avoid. In his first managerial job, he had to manage three people who were senior to him in both age and experience. “It was very interesting to figure out what was my role here as a leader. Respecting and trusting the people who work for you is an important first step, as is gaining their respect and trust.”

After joining Lanxess in July 2015, Papadourakis helped implement in North America the strategy he had discussed with Zachert and van Roessel, beginning with a series of partnerships and acquisitions. First came a 50/50 joint venture with Saudi Aramco called ARLANXEO, which would support Lanxess's synthetic rubber business. Next came acquisitions of the clean and disinfect business from Chemours, and then a $2.7 billion acquisition of specialty chemical manufacturer Chemtura. In February 2018, Lanxess acquired the U.S. phosphorus additives business from Solvay.

“These acquisitions are fully in line with our strategy because they expanded our position in some of our core markets and provided us with more leading positions, ” Papadourakis says. The Chemtura acquisition grew Lanxess's business in flame retardants and lubricant additives, but also included two new business units—organometallics and urethane systems—that fit the company's strategic criteria: North American growth in midsize, specialty markets that were less cyclical in nature.

Lanxess will continue to participate in the consolidation of the chemical market. But as Lanxess seeks to build its brand with a focus on quality in products, services, and innovation, Papadourakis says he's turning his attention to the company's culture as well.

Lanxess is also focusing on innovation—not just in products, but also in processes. An example is in the company's inorganic pigments business unit. For the production of unique yellowish-red iron oxide pigments, Lanxess developed a new process called Ningbo, named after the Ningbo, China, plant, which is the first built to use the technology at a commercial scale. 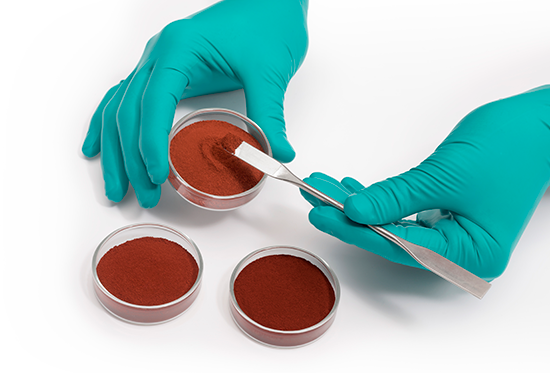 A traditional manufacturing process for iron oxide red pigments produces nitrous oxide emissions. The Ningbo production process, which is based on patented technology, covers the entire color spectrum of ironoxide pigments in the medium and yellowish red color range. By optimizing production, the Ningbo process significantly reduces volumes of nitrous oxide produced compared to traditional iron oxide red production procedures. Furthermore, using a multi-stage wastewater treatment process, more than 80% of the wastewater is cleaned and recycled back into the process.

The plant is not only sustainable, with a much smaller environmental footprint, but also offers product innovations. “It enables a considerable extension of our product offering,” Papadourakis says.

Such innovations that drive growth through responsible care and sustainability will be vital not only for the growth of Lanxess, but for the entire chemical industry, Papadourakis says. Together, he says, the industry can demonstrate, “We are offering solutions to help society move and grow in a sustainable way.”