A simplified, standardized benchtop instrument for electrochemistry brings this powerful and clean synthetic method within reach of the broader organic chemistry community

Phil Baran’s message to the chemistry community was clear: It’s time to clean up its act. When Baran, professor and Darlene Shiley Chair in Chemistry at Scripps Research Institute California, took the stage at an IKA-sponsored keynote lecture at the ACS fall national meeting in Washington, D.C., he unveiled a secret weapon that would allow researchers to begin to truly deliver on the promise of sustainable, green chemistry. Although the technology presented that morning was state of the art, it was rooted in a form of chemistry that dates back more than 150 years.

The use of electrical current to catalyze chemical reactions—known more generally as electrochemistry—can be traced all the way back to Michael Faraday’s work in the 1830s and is widely used in the industrial manufacture of materials, including aluminum, polyvinyl chloride, and floral fragrances for detergent.

Watch the video of the reveal of the ElectraSyn 2.0.

But despite being robust and efficient, electrochemistry also remains a niche tool, relegated to either industrial production-scale or bench-based, analytical-scale use. “When you talk to people who do real chemistry, whether they’re in the medicinal chemistry environment or making agrochemicals or materials, you’d be really hard-pressed to find people who do electrochemistry,” said Baran at the start of the event. Baran himself is only a recent convert. In 2014, his lab was struggling with a stubborn natural product synthesis project. It fell into line only when he found that Ph.D. student Brandon Rosen was willing to tackle it with an electrochemical approach. “Desperation,” recalled Baran. “That’s how we were brought to it.”

At his presentation on Aug. 22, it was obvious that Baran came as an electrochemical evangelist, armed with a powerful and simple new instrument that he believes will win over many more converts. This new system, called ElectraSyn 2.0, was developed through close collaboration between Baran’s group and instrument manufacturer IKA. Baran offered an in-depth introduction, as well as live demonstrations, to show how ElectraSyn 2.0 can make electrochemistry more readily accessible to chemists. 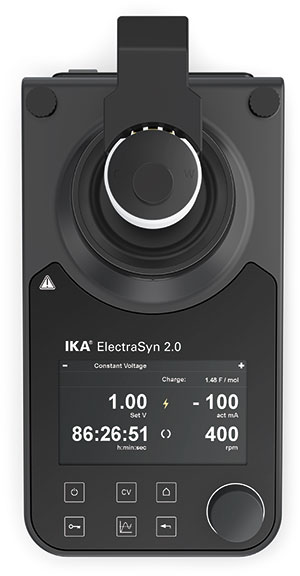 The ElectraSyn 2.0 combines a potentiostat, analytical tools, and a magnetic stirrer with a simple software interface intended to accelerate the planning and execution of electrochemical syntheses.

In principle, electrochemistry can make synthetic reactions faster and simpler. However, technology remains a critical hurdle to would-be electrochemists because simply the process of setting up the technique in the laboratory can be overwhelming. A typical laboratory setup comprises a jury-rigged amalgam of wires, electrodes, potentiostats, voltammeters, glassware, and more that can devour most of the space in a typical fume hood. “Potentiostats and galvanostats have been available for the specialists, but not general users,” says Shelley Minteer, an analytical chemist at the University of Utah who routinely uses electrochemistry. “And even with the potentiostat or galvanostat, you are plagued with trying to understand what electrodes and what cell geometry to use.”

This lack of robust standards or reproducible instructions on how to design and perform an electrochemical synthesis makes it a hard sell. “There’s definitely a stigma that’s grown up around the technique,” says Patrick Harran, chair of organic chemistry at the University of California, Los Angeles. “I have a colleague who jokingly cringes every time someone mentions electrochemistry.”

But at the same time, the community is aware of its potential. Baran recalls the response he got at a recent medicinal chemistry conference. “Everybody there agreed that electrochemistry was exciting but nobody had done it,” he says. “And then when they went and found out what the shopping list is—it’s like making a homemade nuclear warhead!” This is especially problematic because the quicker solutions, such as chemical catalysts, are also far dirtier. Chromium catalysis, for example, can exert a toll on both the environment and human health. “Electrochemistry provides a more energy efficient and sustainable approach to synthesis,” Minteer says.

It was the combination of these factors that gave rise to IKA’s ElectraSyn 2.0, an integrated and standardized instrument for electrochemistry. In an instrument with the approximate footprint of a laboratory balance, the ElectraSyn combines a potentiostat, analytical tools, and a magnetic stirrer with a simple software interface intended to accelerate the planning and execution of electrochemical syntheses. On stage, Baran noted that this instrument represents the first benchtop tool of its kind in more than 70 years, since IKA released its original ElectraSyn instrument.

Baran’s collaboration with IKA began roughly three years ago, when the company’s owner and president, René Stiegelmann, visited Scripps. Stiegelmann was impressed by Baran’s passion and intellect. When the concept of building a next-generation electrochemical tool came up, Stiegelmann was concerned about doing right by the project. “I knew that to work with this guy, we would have to give everything,” says Stiegelmann. “We got our best engineers from all over the world, and three months later, we had a research center in San Diego.” This setup permitted routine cross-pollination between Baran’s chemists and IKA’s engineers, and the company worked at a breakneck pace to complete the first instrument. The instrument Baran presented was designed and produced within two and a half years of its original inception, after countless prototypes and more than 30,000 person-hours of engineering work.

Baran praised the efforts of the engineers to bundle so many functions into a single instrument that occupies minimal benchtop space. “’No’ is simply not in their vocabulary,” he says. “The device incorporates a potentiostat and a stirring plate, and you might think that would be easy. But there is a thing called the electromagnetic effect where it’s difficult to have a magnetic field and an electric current at the same time and have it be stable.”

He also highlighted the ElectraSyn interface, which uses software called Smart Assist to monitor the reaction conditions and offer suggestions to users on how to proceed. As an initial demonstration, Baran began an electrochemical reaction on stage—the difluoromethylation of caffeine—and followed the machine’s cues to select electrodes, solvent, power levels, and more.

In a second demonstration, he used the device to take cyclic voltammetry readings of TEMPO, a commonly used catalyst. “Usually, you need a separate $5,000 instrument … to find out the redox potential of your molecule,” he said. Finally, Baran moved into less well-charted territory, programming the ElectraSyn to perform a newly invented, nickel-catalyzed aryl carbon-nitrogen bond-formation reaction. The reaction was described in an Angewandte Chemie paper (DOI: 10.1002/anie.201707906) that went live concurrently with his presentation.

Above all, Baran emphasized that the instrument was intended to enable consistent performance from experiments regardless of where in the world they are being done. Earlier in his lecture, he recalled being confronted on Twitter about the reproducibility of his early electrochemistry work. This complaint was grounded primarily in the inherent difficulties of successfully setting up an electrochemical experiment; this situation was rectified only after the online community rallied to help the frustrated scientist reproduce Baran’s electrochemical experiment. But if researchers can now obtain access to a standardized collection of electrodes and experimental configurations, such complaints may become a thing of the past. Baran noted that the instrument’s price of $1,399—roughly the same as a magnetic stirring plate—makes it far more accessible than a conventional electrochemistry apparatus, which can cost anywhere from $7,000 to $70,000.

In addition to Baran, 15 other research teams around the globe have gotten hands-on experience with the ElectraSyn 2.0 as part of IKA’s pioneers program. The feedback has been broadly positive. “We loved it,” says Minteer, who was part of the testing program. “It is very straightforward and easy to use and priced extremely well.”

Other chemists, who did not participate in the IKA pioneers program, were likewise impressed by the presentation and believe the instrument could be a powerful tool for winning over chemists reluctant to embrace electrochemistry. "I think it’s an exciting development," says Oana Luca of the University of Colorado, Boulder. “It will likely attract attention to some of the electrochemical methods currently utilized in the field and provide an accessible benchtop option for electrochemical reaction development.” She notes that it may not be able to perform the entire range of experiments that a high-end potentiometer would enable, but it should nevertheless be broadly enabling for synthetic chemists. Harran concurs, adding, “The lower the barrier for entry, the better.”

Although designed with professional chemists in mind, Baran made clear that he considers this an “everything instrument” that includes a user-friendly introduction to electrochemistry for undergraduate and graduate student, or even high school, classrooms. This accessibility will also be an important element of strengthening the field, from Luca’s perspective. “I think one of the barriers to adoption has been the lack of synthetic electrochemistry in any of the chemistry curricula,” she says.

This first iteration of the system is designed to enable individual reactions at the preparative scale. However, other modules are in development to expand these capabilities further, including a carousel system that can be plugged into ElectraSyn to enable up to six reactions to be performed in parallel. Minteer highlights this as a much-needed upgrade. “The ability to multitask and have multiple electrochemical cells running simultaneously will be important,” she says.

IKA has also developed and launched a higher-throughput version known as the ElectraSyn Flow, capable of performing reactions with output at the multikilogram scale.

The software will also be routinely updated to include new reactions, including contributions developed over time by the ElectraSyn user community. 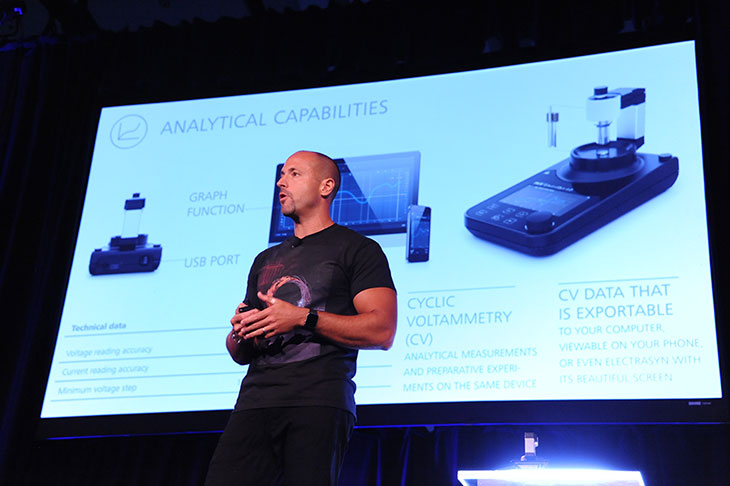 Phil Baran of The Scripps Research Institute described in a lecture at the ACS national meeting how he and his team collaborated with IKA engineers and scientists to develop the ElectraSyn 2.0.

Stiegelmann and Baran are proud of the instrument that debuted at the ACS fall national meeting, but both men also recognize that IKA’s work is far from finished. Stiegelmann looks at each purchase of ElectraSyn as a long-term investment in a tool that will evolve over time in response to feedback from researchers. “If you buy products from IKA, you are buying support and development for future products,” he says. “This is what gives us fuel for additional development.”

But finished or not, Baran sees ElectraSyn as an immediate opportunity to directly test the organic chemistry world’s commitment to being environmentally responsible. “Is it all talk, or is it real?” he asks. “Chemistry is often labeled as a dirty and polluting field, but if we think about what is the thermodynamic end point of the most sustainable chemistry that exists on Earth currently, it’s electrochemistry.”

Sponsored content is not written by and does not necessarily reflect the views of C&EN’s editorial staff. It is authored by writers approved by the C&EN BrandLab and held to editorial standards expected in C&EN magazine stories, with the intent of providing valuable information to C&EN readers. This sponsored content feature has been produced with funding support from IKA.