LITTLE THINGS CAN MEAN A LOT 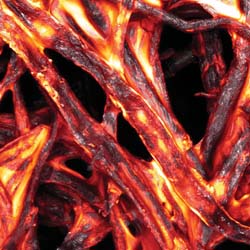 Some of the latest developments in nanotechnology were on the agenda at a symposium on nanostructured polymeric materials in Strasbourg, France, late last month. The symposium was sponsored by BASF to celebrate the first anniversary of its research laboratory at the Institute of Supramolecular Science & Engineering (ISIS), part of Strasbourg's Louis Pasteur University.

The field is of particular interest to BASF, said Stefan Marcinowski, BASF board member and executive director for research.

Both within BASF and outside, Marcinowski noted, nanotechnology is becoming an increasingly important focus in almost all areas of science and technology. And it's becoming big business as well: Nanotechnology-based products already contribute more than $2 billion annually to BASF's sales, he said.

Among the symposium subjects discussed was the idea of manipulating polymers on a nanoscale for a variety of applications. For example, Rolf Mülhaupt, a professor at Germany's Freiburg University, described his team's work in air-filled nanofoams, work he said was "a game that is only beginning." The team pumps a silane such as perfluoroethylsilane into melted polyamide. Subsequent injection molding of the polyamide leads to formation of 200-nm pores with a fluorinated coating surrounding air bubbles.

"We've got nanopores&#151;with nanofoam and nanoair," he exulted. "Now we are seeing what uses we can put this to" in areas such as thermal insulation.

The technology he is investigating employs terephthalic acid and zinc oxide or a similar inorganic compound to give a metal-organic framework structure. "We are playing around with the different inorganics," he said, to vary the porosity of the resulting nanocube adsorbents.

And some of the adsorption capabilities are impressive: A standard zeolite might have an adsorption surface of 700 m2 per g, but one of the new nanocube adsorbents has a surface capacity of 4,500 m2 per g. "This is an amazingly nice and new material," Müller said. "One gram has the equivalent of about 17 tennis courts in surface area."

These adsorbents, he suggested, could be used in gas storage vessels or in the storage and transportation of liquids such as toluene or benzene. "You wind up with the handling and pouring properties of a powder, even though it is up to 70% liquid," Müller said.

Paul Calvert, a professor specializing in biomimetic materials and processing at the University of Massachusetts, Dartmouth, described work he is doing to build up nanostructures with ink-jet technology. Using a Hewlett-Packard ink-jet print head with his team's electronics, he said he can turn lines into patterns, and from there build up layers. These layers could be used, for example, in integrated circuitry in a structure.

Even yeast or animal cells, he added, can be printed. "They survive," he said. And such techniques could be used with organic light-emitting diode technology to put diodes down on flexible substrates, for example.

For BASF, the increasing interest in nanotechnology is what spurred the company to work out its agreement with ISIS, which is directed by Chemistry Nobelist Jean-Marie Lehn. BASF leases lab space in ISIS's new building and staffs it with BASF's own team of postdocs.

Lehn noted at the symposium: "When this idea came up—that of a company coming in and renting space, doing what they want—people said this would never work. But you have shown that it does. Moreover, it is a big advantage to us to have you around. We have a better relationship with people who must actually do something with, and make money from, our research."

Materials
Covalent organic frameworks debuted and multiplied quickly
Business
More rabbits from fewer hats
Business
The Materials The Cities Of The Future Will Need
Share X
To send an e-mail to multiple recipients, separate e-mail addresses with a comma, semicolon, or both.
Title: LITTLE THINGS CAN MEAN A LOT
Author: PATRICIA SHORT
Chemical & Engineering News will not share your email address with any other person or company.