The challenge, promise, and implications of the nano revolution permeated many meeting events 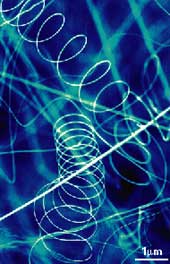 Credit: COURTESY OF ZHONG LIN WANG/GEORGIA TECH
Zinc oxide nanosprings synthesized at Georgia Institute of Technology could find use as actuators or sensors in future nanosystems.

A famous scene from the 1967 film "The Graduate" was unreeled two weeks ago at the American Chemical Society's national meeting in Anaheim, Calif. It's the scene in which the character played by Dustin Hoffman is collared at his graduation party by a family friend who offers him some unsolicited career advice: "I just want to say one word to you ... just one word. ... Plastics. There's a great future in plastics."

Except that in the film clip shown in Anaheim, "plastics" had been dubbed as "nanotechnology," eliciting hearty laughter and applause from the assembled scientists.

The dubbing reflected the fact that nanotechnology, the manipulation of matter at the atomic scale, is considered "the next big thing."

But at the ACS meeting, it was already a big thing. In fact, it took center stage, with presidential events and more than a dozen symposia in eight divisions focusing on different aspects of nanoscience and nanotechnology. There was even a career workshop that explored what skills are necessary to do well in the realm of the ultrasmall (see page 53).

At a presidential colloquium titled "Big Promise from 'Small' Science--How Nanotechnology Will Change Our Lives," prominent figures from academia, industry, and government explored what nanotechnology has to offer and its possible impacts on science and society. Materials with nanoscale structure already are used in a variety of applications, such as catalysts for gasoline cracking, read/write heads, and sports equipment. And with billions of dollars being invested worldwide in nanotechnology, many more areas stand to benefit. For example, theoretical chemist Mark A. Ratner of Northwestern University ticked off several targets of nanotechnology, such as greaseless suntan lotion, the five-minute health swab test, medicine geared to the patient's own genome, optical computers, heatless light sources, and truly efficient capture of solar radiation.

In spite of the promise and excitement of nanotechnology, there is a growing backlash against it, "before it has even grown out of its infancy," according to Jillian M. Buriak, a chemist at the University of Alberta. The backlash, she noted, is fed by the public's unwarranted fears of the technology and of "science running amok."

Physicist Donald Eigler of IBM Almaden Research Center in San Jose, Calif., also addressed what he called the "nano hysteria" surrounding nanotechnology, as exemplified by Michael Crichton's book "Prey," soon to be a motion picture. Eigler opined that he found the book to be "a rather poor example of science fiction." Besides the book's factual errors, "what's really wrong [with it] is the absence of critical thought," he told his listeners. Critical thought, which is what drives science, is "the ability to distinguish between that which is real and that which is not so real," he explained.

The public's fear that self-replicating "nanobots" will get out of control, reproducing themselves from raw materials until the world is reduced to a "gray goo," reminded Eigler of some early mapmakers who populated uncharted expanses of ocean with mythical monsters that could devour ships. Such fears take flight from the absence of critical thought, he noted. "We should have a rational, informed, intelligent discussion" about nanotechnology and how we should use it, Eigler said. And that discussion must be based on critical thought.

TECHNICAL PRESENTATIONS on nanoscience at the ACS meeting were ubiquitous. As its high-profile kickoff event, the Inorganic Chemistry Division's fledgling Nanoscience Subdivision sponsored a symposium titled "Nanoscience in Inorganic Chemistry." That was where chemist Peidong Yang of the University of California, Berkeley, the first chair of the subdivision, showed the clip of "The Graduate." What followed were lectures by six notable chemists who reviewed progress in catalysis, nanowires, nanoparticles, nanocomposites, and other nanomaterials.

The Advanced Materials & Nanotechnology Subdivision of the ACS Division of Industrial & Engineering Chemistry sponsored a three-day symposium on single-walled carbon nanotubes (SWNTs). The symposium, which ended up having twice as many speakers as its organizers had originally anticipated, focused on what might seem to be a rather narrow topic: the purification, separation, and characterization of SWNTs. But as chemist Benoit Simard of the Steacie Institute for Molecular Sciences, Ottawa, Ontario, noted in his talk, there are "a zillion" methods for purifying crude nanotube samples. And researchers continue to look for better ways.

The commercial aspects of the nanotech revolution were explored in yet another symposium. Although the speakers represented a variety of perspectives--large chemical companies, start-ups, academia, and government--a common thread was woven through all the talks: From a commercial standpoint, nanotechnology is only as good as the products it brings to market and the profits it brings to the companies behind those products.

Amid all the nano doings, Wiley-VCH announced its own contribution to the nano buzz: the introduction of Small, a new interdisciplinary journal for nano- and microscience and technology. It will begin cranking out 12 issues a year in January 2005. Details are available at http://www.small-journal.de.

The new journal, coming on the heels of ACS's Nano Letters and related journals, suggests there's a great future in nanotechnology publishing, too.