CELL LABEL
[+]Enlarge
First, an azido sugar is injected into the mouse, metabolized, and expressed on cell surfaces. Second, a phosphine probe is injected and reacts solely with the azido sugar.

First, an azido sugar is injected into the mouse, metabolized, and expressed on cell surfaces. Second, a phosphine probe is injected and reacts solely with the azido sugar.

Instead of mimicking a mouse with a test tube, chemistry professor Carolyn R. Bertozzi and coworkers at the University of California, Berkeley, have successfully mimicked a test tube with a mouse. They carried out a simple organic reaction that proceeds selectively and without interference on cell surfaces within the complex, messy environment of a living mouse [Nature, 430, 873 (2004)]

The demonstration builds on the group’s previous work, in which they performed the Staudinger ligation on cell surfaces (C&EN, March 27, 2000, page 26).

-azidoacetylmannosamine, just under the skin of a mouse. The mouse metabolizes the sugar, knocks off the acetyl groups, and expresses it on the tip of a glycan chain on the surface of some of its cells. The azido sugar runs through the mouse’s sialic acid pathway and replaces about 3% of the sialic acids found on normal cells. It remains attached to the cell for up to five days. 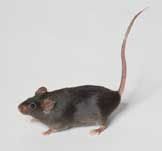 The chemists then inject a phosphine probe—a peptide attached to a phosphine group. This selectively reacts through a Staudinger ligation to the azido sugar displayed on cell surfaces. Finally, the researchers detect the bound peptide using an antibody.

“The fact that this works is remarkable,” writes David A. Tirrell of California Institute of Technology in an accompanying commentary in Nature. Though nonnatural molecules, both the azide and the phosphine are tolerated within a living organism. And because of their foreignness, they react with nothing but each other.

“That’s the whole beauty of bioorthogonality,” Bertozzi says. She likens the azide and phosphine to a biological version of unreactive argon. “At least within the time frame we are talking about, the azide and the phosphine are inert to everything but each other.”

Bertozzi and Tirrell point to the usefulness of this reaction in studying changing cell surfaces in vivo, perhaps even in real time. Glycosylation patterns change as cells undergo major shifts—embryogenesis, for example—or as cells become diseased.

Bertozzi eventually wants to have a small tool kit of reactions that can be used within living systems to probe their function without altering them. “If someone invents a new reaction, we’ll use it,” she says.