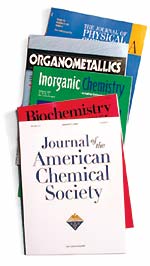 The American Chemical Society and other scientific and technical publishers were blindsided last year by a ruling by the U.S. Treasury Department's Office of Foreign Assets Control (OFAC) that effectively prohibits publication of scientific papers from Iran, Iraq, Libya, Sudan, and Cuba, all of which are under U.S. trade embargoes.

Violation of the trade embargo law can result in a fine of up to $50,000 and imprisonment for up to 10 years.

ACS is still scrambling to craft a policy for dealing with the OFAC ruling for the editors of its 32 journals. The policy must simultaneously adhere to U.S. law and respect the independence of the journal editors and the ethical principle that only scientific merit determines whether a paper is accepted for publication. In 2003, ACS journals received 195 papers originating from the five countries, with the bulk, 170, coming from Iran. ACS journals received a total of 24,222 papers in 2003.

At their annual meeting earlier this month in Phoenix, ACS journal editors adopted a resolution condemning the OFAC policy. It reads: "The ACS journal editors unanimously express their vehement opposition to all laws and regulations that have the effect of restricting the open, worldwide exchange of scientific information. In particular, the editors urge ACS governance and staff to aggressively pursue all appropriate means to bring about the speedy removal of legal obstacles to publication, by the customary process, of papers submitted to the ACS from countries under U.S. trade embargo."

A few ACS journal editors urged the society's Publications Division to ignore the OFAC ruling and publish papers from the embargoed countries as a matter of First Amendment free speech rights.

The OFAC ruling came in response to a request from the Institute of Electrical & Electronics Engineers (IEEE) concerning publishing papers from Iran. What followed is a bit convoluted, but the upshot of the OFAC ruling and interpretation of the pertinent laws by ACS counsel is that the society is prohibited from providing peer reviewer comments to authors of papers from the five embargoed countries and from providing any editorial services to such authors. According to OFAC, that includes "activities such as the reordering of paragraphs or sentences, correction of syntax, grammar, and replacement of inappropriate words."

OFAC also ruled that IEEE "would not be prohibited from accepting camera-ready copies of manuscripts." However, in this age of electronic delivery of scientific and technical journals, there really isn't any such thing as "camera-ready" copy.

Let me be blunt. The OFAC ruling is wrongheaded and counterproductive. The free exchange of scientific and technical information is almost always in the best interests of science and our nation. In the darkest days of the Cold War, the U.S. government encouraged contacts between Western scientists and their counterparts in the Soviet Union and other Eastern bloc nations, including the publication of the few papers such scientists could convince authorities to allow them to submit to Western journals.

The same holds true today for scientists in Iran, Iraq, Libya, Sudan, and Cuba. Publishing peer-reviewed, properly edited research results in Western journals could in no conceivable way enhance the economic situation of these countries. It may, however, nurture the ideal of the free, unfettered exchange of information, an ideal too often suppressed in totalitarian nations. It may give scientists, some of whom are at the forefront of reform movements, hope that their efforts might someday yield fruit.

Under no circumstances can ACS be a partner to violating U.S. law. Such an action would jeopardize both the society and its employees. But ACS must, and I am sure will, work diligently on its own and in conjunction with other like-minded scientific and technical societies to have the OFAC ruling overturned.

As individuals, I urge ACS members to take up the OFAC ruling with their congressional representatives. Trade embargoes may be legitimate tools for changing the behavior of nations, but they should not be extended to blocking the free flow of scientific and technical information.