Hengdian Group: A Big Fish In A Small Town 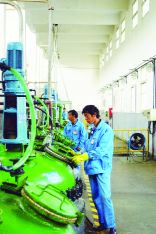 Hengdian Group got its name from the Zhejiang town it hails from, but one could be excused for assuming that it is the other way around. A town of fewer than 100,000 people, Hengdian is a mere speck on the map - really just a big village by Chinese standards. The Hengdian Group, however, is a major concern, employing 30,000 people throughout China. Among these, 4,000 work in the group's core pharmaceutical operations.

Hengdian Group is unusual. It was founded in 1975 as a private concern exporting silk to Japan. Surprisingly, local entrepreneurs could start up companies in China in 1975, but it was extremely difficult to keep them going. China was in the throes of the Cultural Revolution until 1976, and private enterprises were not legalized until 1978 when Deng Xiaoping gained power.

Xu Yongan, president of Hengdian Group, is the son of the founder. He says his father formed the company when he returned to his native Hengdian after spending much of his life as a civil servant. His father, he says, had grown tired of the lies fed to the public by extremists in the Chinese government.

For someone who heads such a large organization, 38-year-old Xu is surprisingly unassuming. He welcomes a visiting reporter on his own, without a surrounding retinue of assistants. He answers questions clearly, without unnecessary details, and in the manner of someone who has nothing to hide. Closely involved with the group's day-to-day operations, he is not above personally attending major pharmaceutical trade shows like the Convention on Pharmaceutical Ingredients (CPhI) or Informex. Although Xu appears worldly, he has spent most of his life in Zhejiang, except for two years in Japan when he was a student.

Pharmaceuticals and fine chemicals are the group's main businesses, Xu says. The group's pharmaceutical sales stand at approximately $450 million per year and are growing by about 20% annually. The products are produced by several group companies bearing unrelated names. One company is called Kangyu, and another, launched by the younger Xu, is called Tospo. These companies produce a broad range of antibiotics in bulk or in formulations, as well as intermediates and active pharmaceutical ingredients. Group companies sell to customers directly, or they go through the group's trading company, Zhejiang Hengdian Import & Export.

The Hengdian Group got into the pharmaceuticals business only in the late 1980s. After establishing itself as a silk producer, the group expanded into electric and electronic appliances in the early 1980s. More recently, the group launched a tourism business to capitalize on the natural beauty of the lakes, rivers, and mountains around Hengdian. Xu says nearly 2 million tourists, mostly Chinese, visited Hengdian in 2002.

As a complement to its pharmaceutical operations, Hengdian is developing its contract research capabilities. The company has set up and invested $20 million in two research labs, in Shanghai and in Sichuan, that employ 200 people. All clients are foreign.

There is a pattern in the way foreign clients approach Hengdian, Xu says. At first, they basically do not trust this still-obscure Chinese organization. But the more they do business with Hengdian, the more confident they become. In early days, foreign drug companies were sourcing in China through buying agents. Now, it is not uncommon for the global purchasing manager of a major firm to visit Hengdian. "Roche, Glaxo - their purchasing managers have been here," Xu recalls.

Xu says his sales force is trained not to overpromise when trying to secure a sale. That means that trust is being built as Hengdian shows that it is capable of fulfilling its commitments. One would assume that Western pharmaceutical companies would be wary of sharing too much intelligence with a Chinese supplier. But Xu says it is common for old customers to come to Hengdian and ask for help in developing new products. "We're no longer basic suppliers; we're increasingly turning into custom manufacturers," he says.

Foreign customers are pleased that Hengdian invests a lot in R&D, Xu says. Another thing they like is the firm's investment in environmental protection equipment. "We follow our own environmental standards without waiting for the government to ask us," Xu claims.

Beyond the need to impress foreign customers and please local officials, Xu says Hengdian has a major tourism business to protect from the harmful effects of pollution. "The environment must be clean in a tourism city," he says. The Hengdian Group has set up a central environmental protection department that enforces standards among the group companies.

In the 29 years since it was founded, Hengdian has seen a lot of change. In the early days of liberalization in China, privately owned companies like Hengdian did not have access to bank financing. "When you have money, it is easy to get things done. With none, it's much harder," Xu says.

At the time, the company's main challenge was to develop good products that customers would buy. Later, it was to secure the funding to keep operations going and to expand. Now, he says, the biggest challenge is to locate qualified individuals and organize the group's operations so that they can perform effectively.

Within the next five years, Xu hopes to set up a joint venture with a foreign partner, something that Hengdian has not done so far. Based on the challenges the group has faced in the past, this goal seems quite achievable.

Business
Why China’s contract research firms are doing more business at home
Business
Halogen Chemistry Specialist  Kingchem Ups The Ante
Business
A Chinese Chemical Supplier Matures
Share X
To send an e-mail to multiple recipients, separate e-mail addresses with a comma, semicolon, or both.
Title: Hengdian Group: A Big Fish In A Small Town
Author:
Chemical & Engineering News will not share your email address with any other person or company.