A new tuberculosis drug with a novel mechanism of action may significantly shorten TB treatment regimens when used in combination with existing drugs.

TB is an often-fatal chronic bacterial infection that attacks the lungs and other organs. One-third of the world's population currently has latent or active TB, and the disease killed about 2 million people in 2002.

Treatment currently involves administering a cocktail of drugs for six to nine months. But compliance is poor, particularly in developing countries. Stopping treatment too soon can make patients relapse and cause the TB bacillus, Mycobacterium tuberculosis, to become drug-resistant. 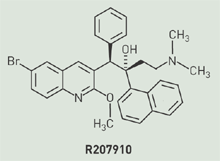 Faster TB treatments are thus urgently needed, but no new antibiotic selective for TB and other mycobacteria has reached clinical trials in the past 40 years. Now, the first such agent, the diarylquinoline R207910, has been identified by Koen Andries of Johnson & Johnson Pharmaceutical R&D, Beerse, Belgium, and coworkers [Science, published online Dec. 9, http://dx.doi.org/10.1126/science.1106753].

They discovered the drug by screening compound libraries for antibiotic activity. R207910 was found to kill TB and other mycobacteria, including drug-resistant strains. It acts by inhibiting ATP synthase, a mechanism of action never before described for any antibiotic, Andries says.

When administered with other drugs to tubercular mice, R207910 shortened treatment times by about half, and it was well tolerated in Phase I studies in healthy human volunteers. The agent will be developed by Tibotec, in Mechelen, Belgium.