HEAD-ON COLLISION
[+]Enlarge
Credit: ILLUSTRATION BY THOMAS TEGGE, LLNL
Element 115 is created in a high-energy collision between a calcium projectile and an americium atom.

Credit: ILLUSTRATION BY THOMAS TEGGE, LLNL
Element 115 is created in a high-energy collision between a calcium projectile and an americium atom.

Elements 113 and 115 have been synthesized and detected for the first time, according to an international research team based in Dubna, Russia. The discovery broadens understanding of the properties of superheavy nuclei and adds to a growing number of experimental findings that support theoretical predictions of very stable transactinide elements.

In a series of experiments conducted this past July and August, scientists at Dubna's Joint Institute for Nuclear Research and their colleagues from Lawrence Livermore National Laboratory in California bombarded a target enriched in americium (containing 95 protons) with a highly energetic beam of calcium ions (containing 20 protons) and recorded the vast number of particle processes that resulted from the collisions. After combing through the data, the group concluded that four sequences of correlated events signal the creation and subsequent disintegration of four atoms of element 115 [Phys. Rev. C., published online Feb. 2, http://dx.doi.org/10.1103/PhysRevC.69.021601].

In the 243Am + 48Ca experiments, the researchers observed four decay chains in which excited nuclei of element 115 fell apart in characteristic ways, they say. In three of the sequences, compound nuclei of 288115, an isotope with 173 neutrons, lasted on the order of 100 milliseconds and then emitted an -particle (a 4He nucleus), thereby forming an atom of element 113--another element that had never before been detected. Within about 20 seconds, four additional -decay events converted the product to element 105 (dubnium), which underwent spontaneous fission after roughly one day.

Under slightly altered experimental conditions, the nuclear reaction produced one atom of 287115, the group reports. The lighter isotope (containing 172 neutrons) was observed to decay by emitting four -particles within a half-second time interval followed by a spontaneous fission.

Scientists caution that these results will have to be confirmed in another laboratory before they are fully accepted by the heavy-element community.

Compared with ordinary stable matter that appears to last forever, atomic lifetimes that span just a few seconds seem fleetingly short. But as Yuri T. Oganessian, the scientific leader of the Dubna team, notes, the observed lifetime of element 115 "is tremendously long on a nuclear timescale."

How long a nucleus lasts before falling apart is a measure of its stability. Some isotopes of superheavy elements survive for mere microseconds or less before decaying. But according to nuclear structure theory, nuclei with roughly 184 neutrons and 114 protons are predicted to be very long lived and are described as residing on an "island of stability" on the chart of nuclides. Preparing nuclei with which to test the stability theory has proven quite difficult. Yet, in the past few years, researchers have made significant progress. The Dubna work on element 115 is the most recent example. According to Oganessian, "The long decay chain for element 115 is a direct consequence of the existence of the stability island." 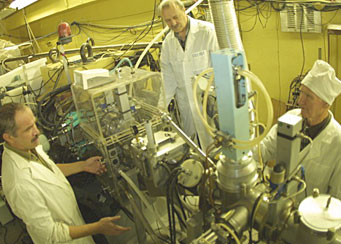 The long-lived dubnium isotope produced by the decay of 288115 opens new opportunities to study that element's chemical properties, says Kenton J. Moody, heavy-element group leader at the Livermore lab. The isotope's daylong lifetime is "a very exciting result for us," he adds.

Dubnium has been produced previously by way of other nuclear reactions, and its chemical properties have been investigated. But those experiments required fast online methods to accommodate the fraction-of-a-minute lifetimes of the available dubnium isotopes.

The long-lived 268Db isotope observed in the element-115 experiments may make it possible to study the heavyweight using more complicated chemical procedures, Moody notes. He adds, "We're looking forward to studying element 105 chemistry with the luxury of getting a cup of coffee between runs."

For images and animation, go to http://www.llnl.gov/llnl/06news/NewsMedia/element.html

Periodic Table
The rewards and challenges of expanding the periodic table, by Hiromitsu Haba
Physical Chemistry
The periodic table got four new elements
Physical Chemistry
Plutonium’s Shifty Ground States
Share X
To send an e-mail to multiple recipients, separate e-mail addresses with a comma, semicolon, or both.
Title: NEW SUPERHEAVY ELEMENTS CREATED
Author: Mitch Jacoby
Chemical & Engineering News will not share your email address with any other person or company.