YEW GOT IT
[+]Enlarge
Credit: Photodisc
A simple semisynthetic process for converting a compound isolated from English yew needles to Taxol helped make the anticancer drug a huge commercial success.

When Arthur S. Barclay stuffed a bag with 15 lb of twigs, needles, and bark from Pacific yew trees in a forest near Mount St. Helens some 43 years ago, he couldn't have known that history was about to be made.

But several months later, in 1963, when Monroe E. Wall discovered that extracts of the tree's bark possessed antitumor properties, the importance of the scrappy tree's hidden treasure began to reveal itself.

The story of the discovery of paclitaxel, and the subsequent development of the pharmaceutical compound that 31 years later would come to be marketed by Bristol-Myers Squibb, is full of twists and turns. At several points along the way, the project ran into major roadblocks, and prospects for commercialization looked bleak. But eventually, an enormous R&D effort--originally on the part of scientists in government facilities and later in commercial labs--resulted in the billion-dollar-per-year all-time best-selling cancer-treatment drug, Taxol.

Barclay was one of several Department of Agriculture botanists charged with collecting plant samples for a National Cancer Institute study. The study was part of a program initiated by NCI in 1958 to screen some 35,000 plants for anticancer activity. While Barclay was foraging for bits of trees, shrubs, and flowers in the forests of the Northwest, Wall and his coworker Mansukh C. Wani were busy purifying and isolating plant compounds for anticancer tests on the other side of the country, in Research Triangle Park, N.C.

Extracts from the bark of the Pacific yew (Taxus brevifolia) quickly showed outstanding therapeutic promise, but it was not until 1967 that Wall and Wani had isolated the active ingredient and announced their findings at an American Chemical Society meeting in Miami Beach. At the time of the meeting, the phytochemists had only a preliminary idea of the structure of the compound. But a few years later, they had it pinned down. The team published their results in 1971 in the Journal of the American Chemical Society.

It didn't take long for the paper to get noticed. At Stanford University, Robert A. Holton was just starting postdoctoral research in natural products synthesis when the paper was published. "I remember standing in the lab flipping through the latest issue of JACS and seeing this structure and thinking, 'Wow, I can't believe this thing even exists," Holton recalls enthusiastically.

Now a chemistry professor at Florida State University, Tallahassee, Holton explains that paclitaxel's "unusual ring system and plethora of functional groups" grabbed his attention because he was on the lookout for "hot target molecules that were full of synthesis challenges." For Holton, paclitaxel certainly fit the bill. But it would be several years before he devoted his attention to synthesizing the compound. 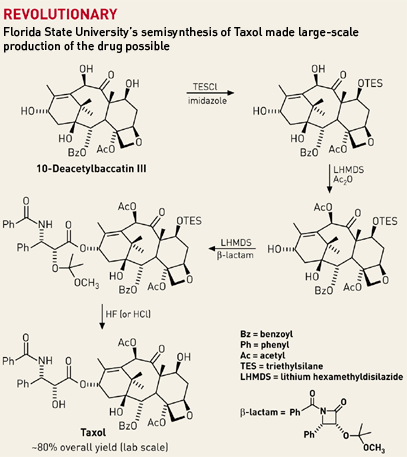 MEANWHILE, researchers in many laboratories were investigating the properties of the promising-looking drug. One of the key questions of the day was, How does Taxol kill cancer cells?

In the late 1970s, Susan B. Horwitz, a molecular pharmacologist at Albert Einstein College of Medicine of Yeshiva University, New York City, answered the question--and in so doing, uncovered a surprising and novel cellular mechanism. Horwitz discovered that Taxol works by stimulating growth of microtubules and stabilizing the cell structures so steadfastly that the killer cells are unable to divide and multiply.

Horwitz's discovery of a new biological mechanism brought the scientific community's excitement over Taxol to an even higher level. But several woes impeded the would-be drug's introduction to the marketplace. For example, paclitaxel was found to be stubbornly insoluble in nearly everything. Eventually, a castor-oil-based solvent was used in clinical trials. But strong allergic reactions to the formulation caused some of the studies to be delayed and others to be discontinued.

Availability of the drug--or, more accurately, lack of availability--seemed at the time to be an insurmountable problem. Using the most advanced methods available, scientists found that the bark of a 40-foot Pacific yew tree, which may have taken 200 years to reach that height, yielded barely half a gram of Taxol. And each 0.5-g harvest required felling a tree, which sparked a major environmental controversy.

That's where Holton came back in the story. Scientists knew that, unlike paclitaxel, which is found in tiny quantities in rather uncommon trees, a related compound known as 10-deacetylbaccatin (10-DAB) could be isolated at a much larger scale from the needles of the common English yew shrub. Over time, Holton's group figured out how to make Taxol a commercially viable product. They did so by developing a four-step procedure for converting 10-DAB to Taxol in high yield without needing to cut down trees along the way.

In 1993, Taxol was finally brought to market by Bristol-Myers Squibb and was soon recognized as an effective drug for treating ovarian cancer, breast cancer, and certain forms of lung cancer and other cancers. The product quickly became a huge commercial success--with annual sales peaking at nearly $1.6 billion in 2000. 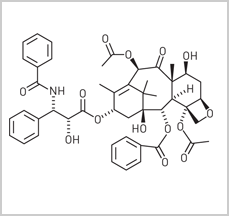 Share X
To send an e-mail to multiple recipients, separate e-mail addresses with a comma, semicolon, or both.
Title: Taxol
Author: Mitch Jacoby
Chemical & Engineering News will not share your email address with any other person or company.