Star Turn
[+]Enlarge
Credit: Courtesy of James Kennedy
Made famous by the movie "Sideways," pinot noir is thought to be one of the most ancient grape varieties used in wine production.

Credit: Courtesy of James Kennedy
Made famous by the movie "Sideways," pinot noir is thought to be one of the most ancient grape varieties used in wine production.

Chemists appreciate wine for its color, taste, and aroma. They can also appreciate an aspect of the beverage that escapes the general public: the chemistry that transpires during the production and aging of wine.

Consider, for instance, the chemistry responsible for the color of red wine, which shifts from bluish red when the wine is first produced to brick red when it's aged. "The chemistry of red wine color has been a fascination for centuries because of its complexity and overall importance in wine quality," according to James A. Kennedy, an assistant professor in the food science and technology department at Oregon State University, Corvallis. Advances in the past decade "in the separation and characterization sciences have led to an explosion of growth in our understanding, not only of the structures that are involved in red wine color, but also in how they are formed."

Of course, color is of more than academic interest. "The first thing that a wine judge looks at is the color of a red wine," Kennedy noted. "The color can give the judge some indication as to the quality of the wine when it's compared with the wine's age. Ultimately, the color affects the score and the price of the wine." Kennedy spoke in March during the American Chemical Society national meeting in Atlanta. His presentation was part of a Division of Agricultural & Food Chemistry symposium on the color of foods.

Kennedy, who grew up in Davis, Calif., earned a B.S. in chemistry at the local branch of the University of California, which is renowned for its grape and wine education and research. After graduation, he worked in the pharmaceutical industry and then in a winery as a chemist. Then he returned to UC Davis, earning a Ph.D. in applied chemistry while investigating the structural changes that tannins undergo in ripening grapes.

A class on the chemistry of wine aging provided Kennedy with the opportunity to sample the oldest red wine he's ever tasted. The wine had been salvaged from a hotel damaged in the 1906 San Francisco earthquake. It had later been stashed in UC Davis' wine library, which holds more than 70,000 bottles. The tasting experience was instructive. It showed that "the wine that was produced back then had a lot of flaws, flaws that weren't simply the result of age but were due to poor wine-making practices," Kennedy recalled. "Given its age, it wasn't too bad, but the amount of acetic acid was a little higher than you would normally want to see. This volatile acidity was present at the time of wine production."

Although the production of wine is still an art, modern-day winemakers can rely on the findings of scientists such as Kennedy to help them avoid such errors. Certainly, wine still holds many mysteries. But researchers have made significant headway in explaining the properties and behavior of wine. For instance, they know that the color of red wine is initially attributable to anthocyanins derived from grape skins.

High-performance liquid chromatography is the analytical method of choice to look at these chemicals, according to Kennedy. In addition to nuclear magnetic resonance spectrometry and mass spectrometry, the technique has shown that there are five principal anthocyanins in most red wines. These compounds differ in the substituents attached to the flavonoid portion of these 3-monoglucosides. The bulk of the color is provided by the malvidin-based anthocyanins. Cabernet sauvignon, for example, contains roughly equal amounts of malvidin-3-glucoside and its acetate ester, about one-fourth that amount of the coumarate ester, and lesser amounts of other anthocyanins.

Anthocyanins shift between different forms that are in equilibrium, including the flavylium cation form, which appears red, and the hemiacetal form, which is colorless. The addition of sulfur dioxide to wine promotes the formation of another equilibrium product, the bisulfite form, which is also colorless. "The problem with that equilibrium is that although bisulfite is important as a preservative, it also bleaches color," Kennedy noted.

"Winemakers would like to stabilize the flavylium form as much as possible, because it makes wine more red," he added. But they have their work cut out for them. At best, 20% of the anthocyanin species observed in wine are in the flavylium form, whereas more than 70% are in the hemiacetal form.

After a red wine is produced, reactions occurring in the beverage modify the original anthocyanins. In fact, within a year or so of production, the anthocyanins are largely gone—yet the wine's red color persists, Kennedy said. "As chemists, we're interested in trying to understand the reactions that anthocyanins undergo in the wine."

One reaction combines anthocyanins with the yeast metabolite pyruvic acid to create a modified anthocyanin, one of a group of pigments known as vitisins. The flavylium forms of these brick-red pigments are more stable than those of the original blue-red anthocyanins because of their greater conjugation. "They are less susceptible to forming hemiacetal hydration products, and so a higher proportion of them are colored on a molar basis," Kennedy explained. As a wine ages, and the original anthocyanins disappear, the secondary pigments come to dominate, shifting the color of the wine.

Viticulture
[+]Enlarge
Credit: Courtesy of James Kennedy
Kennedy harvests pinot noir grapes at Chehalem Ridgecrest Vineyard in Newberg, Ore., as part of a study on the effect of grapevine vigor on grape and wine phenolic composition. 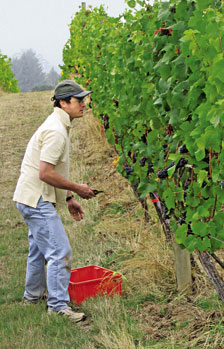 Credit: Courtesy of James Kennedy
Kennedy harvests pinot noir grapes at Chehalem Ridgecrest Vineyard in Newberg, Ore., as part of a study on the effect of grapevine vigor on grape and wine phenolic composition.

Meanwhile, other reactions are proceeding in the wine. Because wine is acidic, with a pH of 3–4, "you have a lot of acid-catalyzed reactions, a lot of nucleophiles and electrophiles swimming around in the wine," Kennedy said. The electrophiles include the flavylium form of anthocyanins. The nucleophiles include the hemiacetal form of anthocyanins. The nucleophiles also include catechins as well as proanthocyanidins, which are more commonly referred to as wine tannins. These bitter and astringent compounds are derived from the skin and seeds of wine grapes.

Catalyzed by the wine's acidity, the nucleophiles and electrophiles react to form a multitude of compounds. Anthocyanins can hook up with tannin molecules, for example. One mechanism for this process begins when ethanol in the wine is oxidized into acetaldehyde, an electrophile that combines with tannin. The resulting alcohol product can undergo dehydration, forming a vinyl compound that combines with an anthocyanin to create a secondary brick-red pigment.

Kennedy noted that tannins, which lend astringency to red wine, factor into the quality perception of the beverage. "It's generally thought that when you drink a wine, the hydrophobic association between the tannins and your salivary proteins precipitates out the tannins, resulting in the perception of astringency," he said. Making the tannins less hydrophobic reduces this astringent effect. That's just what happens when a tannin molecule combines with anthocyanins. Thus, as wine ages and the tannins become increasingly pigmented, there is a natural "softening" of the astringency.

As time passes, further oxidation and addition reactions increase the size of the tannin/anthocyanin adducts as well as the products of other addition reactions, producing increasingly polymerized wine pigments. "By the time a wine is on the shelf at your liquor shop, it's two to four years old, and the bulk of color in that wine is polymeric," said Kennedy, who is working to characterize the composition of these polymers.

Although the polymerization process is desirable because it yields a stable color, the reactions involved eventually produce compounds that precipitate out of the wine, Kennedy noted. "Improving our understanding of these reactions will ultimately lead to an improvement in the positive aspects of this chemistry, such as color stability and astringency softening, and enable us to slow down the inevitable production of unwanted insoluble compounds."

Analytical Chemistry
What’s whisky and how do you best enjoy its hundreds of flavor compounds?
Environment
Flavor Maker Finds Natural Blue
Environment
Coloring Food, Naturally
Share X
To send an e-mail to multiple recipients, separate e-mail addresses with a comma, semicolon, or both.
Title: Vintage Chemistry
Author: Sophie L. Rovner
Chemical & Engineering News will not share your email address with any other person or company.