SPACE LAB
[+]Enlarge
Credit: Amanda Diller/NASA
The Columbus module arrived at the Kennedy Space Center in Florida in June and is now being prepared for its scheduled October 2007 launch by the space shuttle. 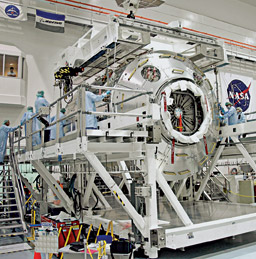 Credit: Amanda Diller/NASA
The Columbus module arrived at the Kennedy Space Center in Florida in June and is now being prepared for its scheduled October 2007 launch by the space shuttle.

The successful launch ofthe National Aeronautics & Space Administration's space shuttle Atlantis on Sept. 9 is good news for the science world. The shuttle's cargo will increase the power capability of the International Space Station (ISS) and set the stage for additional research capacity to be put in place.

Billed as the world's most distinctive research laboratory, ISS has been in a holding pattern since the loss of space shuttle Columbia in February 2003. Station construction, which depends on the shuttle fleet, has been at a standstill, and on-board research has been significantly reduced. The Atlantis mission, which follows two safety test flights (or so-called return-to-flight missions) of the shuttle, marks the revival of station construction and the potential for more research.

The two key research laboratories awaiting their trip to the station are the European Columbus module and the Japanese Experiment Module, Kib

. Both are currently at NASA's Space Shuttle Processing Facility in Florida, where they are being prepared for their shuttle launches scheduled for October 2007 and early-to-mid-2008, respectively.

The pressurized module is about 23 feet long by 15 feet wide and can hold 10 experiment racks, which are each about the size of a phone booth and have independent controls for power and cooling. Also included are four external mounting platforms that will allow station crew to do experiments outside the station in the vacuum of space.

will be launched in sections during three shuttle missions, with the first scheduled to go up at the end of 2007 and the other two in 2008.

Before either Columbus or Kib

can be launched, the station must be reconfigured and additional components must be added. This preparation all begins with the current Atlantis mission.

Atlantis is carrying a 17.5-ton truss that includes a set of giant solar arrays that will add about 50 kW of power to the station. To generate this power, the arrays will use a set of 240-foot solar wings. The truss will also allow the solar arrays to be rotated so they can be continuously pointed at the sun for optimal power generation.

ISS crew will then have to rewire the station and change electrical supplies without interrupting any of the critical systems to generate a stable power grid. This grid must be in place before either Columbus or Kib

NASA's schedule for completing the station by the time it retires the shuttle in 2010 is demanding, experts and the agency agree. If NASA can hold to the timetable, the station will be more than double its current size, with its overall weight growing from the current 215 tons to about 500 tons and its overall habitable volume doubling from 15,000 cubic feet to 33,000 cubic feet.

"It's been almost four years, two return-to-flight missions, a tremendous amount of work by thousands of individuals to get the shuttle program back to where we are right now, and that's on the verge of restarting the station assembly sequence," said Atlantis Crew Commander Brett Jett prior to lift-off. "We're confident that over the next few weeks, and few years for that matter, NASA's going to prove to our nation, to our partners, and to our friends around the world that it was worth the wait and the sacrifice. We're ready to get to work."