Going Down
[+]Enlarge
Credit: INAGAKI ET AL.
In 2004, researchers in this submersible happened onto a deep-sea subsurface lake of carbon dioxide. 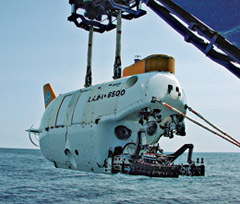 Credit: INAGAKI ET AL.
In 2004, researchers in this submersible happened onto a deep-sea subsurface lake of carbon dioxide.

A lake of liquid carbon dioxide and a microbial ecosystem that exists in association with it under the seafloor have been uncovered by scientists. 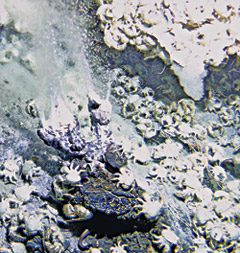 The story began two years ago as the research submersible Shinkai 6500 and its crew prowled about at a depth of nearly 1,400 meters in a hydrothermal field of scorching black-smoker vents in the Okinawa Trough. The scientists inside noticed something strange, even for that locale. Downslope from one of the vents, they saw clear, vapor-rich fluid bleeding upward from white patchy areas of sediment. When they extracted a core for analysis from one of these spots, it was as though they had uncorked a pressurized canister—a continuous fizz of bubbles shot upward.

In the support ship's onboard laboratory, Fumio Inagaki of the Japan Agency for Marine-Earth Science & Technology, in Yokosuka, and his colleagues began to get an inkling of just how odd was the place they had been.

The roughly 35-cm-long core had several layers. The topmost, a few centimeters thick, was a sedimentary "pavement" rich in elemental sulfur. The next 10 cm or so was a layer of icelike CO2 hydrate (CO2

A few other researchers previously had observed CO2 droplets in deep ocean settings, notes University of Southern California earth scientist Kenneth Nealson in an online commentary (Proc. Natl. Acad. Sci. USA, DOI: 10.1073/pnas.0606709103). "What is new is the concept that large bodies of liquid CO2 may exist as subsurface lakes in such zones."

For Inagaki, the data from the team's biogeochemical and microbial analyses are what is most tantalizing. This subsurface ecosystem deep inside the Okinawa Trough "may harbor unique and rich microbial components," he says. Overall cell populations peak at about 1 billion per mL in the pavement layer, then drop a hundredfold in the liquid CO2 zone before rebounding in the region below. Using cell-staining techniques and genetic, metabolic, and other molecular analyses, Inagaki's team detected signs of a rich diversity of methane-metabolizing Archaea and sulfate-reducing bacteria. The microbes resemble catalogued ones, but the composition of the community hasn't been seen before, Nealson writes.

It remains unclear if microbes are living in the liquid CO2 or perhaps concentrate at the liquid CO2/CO2 hydrate interface. Particularly tantalizing, Nealson says, is that "entirely new types of organisms" may be thriving in this Okinawa Trough venue. "It is interesting to think of potential microbial habitats and ecosystems on the polar subsurface of Mars" where ice and solid carbon dioxide abound, Inagaki adds.