by By Susan Morrissey 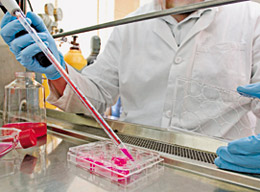 Late last month, researchers from the biotechnology company Advanced Cell Technology (ACT) published a paper in Nature indicating that they had derived embryonic stem cell lines from human embryos without destroying the embryos (C&EN, Aug. 28, page 10). The work was significant because it appeared to remove a major ethical roadblock to stem cell research, namely that an embryo must be sacrificed to develop stem cell lines that have the potential to treat a range of diseases.

But appearances are not always realities. It turns out that the work reported in the Nature paper did not leave the embryos unharmed, as was widely touted on the basis of a press release from the journal. Instead, all of the embryos used in the ACT work were destroyed. (Nature has since issued a corrected press release.) This miscommunication is the latest bump in the road for embryonic stem cell research.

The ACT work was intended to be a proof-of-concept experiment for an alternative cell line derivation that Robert Lanza, ACT's vice president for research and scientific development, discussed during a Senate hearing last July (C&EN, July 25, 2005, page 42). In his testimony, Lanza described how a single blastomere cell could be removed (or biopsied) from an eight-celled embryo and used to derive a viable cell line. The idea for this technique builds on the fact that for years in vitro fertilization clinics have been extracting a single cell from a preimplanted embryo for genetic testing without inflicting harm to the embryo.

The Nature paper, however, reports that the 16 embryos used were biopsied multiple times to obtain multiple single cells that yielded only two stable cell lines and that all of the embryos used in the experiment were destroyed. The paper, therefore, does not show that stem cell lines can be derived through single-cell extraction without destroying the embryo.

Earlier the field was shaken when the work of South Korean Woo Suk Hwang, a Seoul National University researcher, was found to be fraudulent (C&EN Online Latest News, Jan. 11). The work, published in a pair of papers appearing in Science in March 2004 and June 2005, reported the first stem cell derivation from a cloned human embryo and the first patient-specific stem cell line derived in this manner. Both claims were found to be falsified, and the papers were retracted earlier this year.

The controversy surrounding ACT's work and the Hwang misconduct cases are just the most recent obstacles for the field. The rocky road began five years ago when President George W. Bush announced a policy that the government would fund only research using embryonic stem cell lines derived prior to Aug. 9, 2001. As research advanced, the number of eligible, viable cell lines dropped from more than 70 to 21. The viable lines, moreover, have limited therapeutic use because they are contaminated with mouse feeder cells that may carry mouse pathogens.

Despite the miscommunications, misconduct, and the federal funding limitations, stem cell research is continuing to push forward in the U.S. as well as elsewhere in the world. To keep pace with other countries, researchers in the U.S. have turned to other sources to support their work, such as private and state funding.

Six states have moved to provide support for this research on their own. Most notably, California voters passed a $3 billion, 10-year ballot initiative to provide grants for stem cell research. Other states such as Connecticut, Illinois, Maryland, and New Jersey have committed funds to directly support stem cell research, while Wisconsin is supplying funds to make the state more attractive to companies working in this area.

To further address the funding barrier, Congress attempted to pass legislation that would expand the federal policy and allow federally funded research to include stem cell lines created since August 2001 from excess in vitro fertilization embryos scheduled to be discarded as medical waste. The House passed the legislation in May 2005, and after more than a year of behind-the-scenes educating and lobbying by fellow members of Congress and other advocates, the Senate followed suit in July (C&EN Online Latest News, July 19).

The celebration by stem cell supporters was short-lived. Within 24 hours of the measure clearing the Senate, Bush made good on his promise to block the expansion of stem cell funding by issuing the first veto of his six-year presidential tenure.

All was not lost, however, as states answered the veto by increasing their own funding initiatives. For example, in the days immediately following the veto, California Gov. Arnold Schwarzenegger (R) announced that $150 million would be lent from the state's general funds to support grants for scientists working on stem cell research. And in Illinois, Gov. Rod R. Blagojevich (D) pledged $5 million in additional support for stem cell research.

The road to developing treatments for diseases such as Parkinson's and diabetes shows no sign of leveling out in the near term, but if the past is any indication, stem cell researchers are up to the challenge.