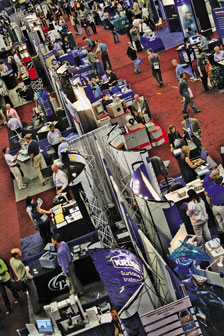 On Sept. 11, the sun finally broke through the clouds on a lovely San Francisco morning. While newspapers, TV broadcasts, and solemn ceremonies commemorated the fifth anniversary of the attacks on the World Trade Center and Pentagon, nearly 15,000 chemists were using the transforming power of chemistry to make the world a safer, healthier, and happier place.

On Sept. 9, science was in service to society as about 150 members of the American Chemical Society and the ACS Board of Directors took part in a "Chemists in the Community: Outreach in San Francisco" event, the first of its kind for ACS. For the program, volunteers cleaned animal cages and renovated exhibits at the San Francisco Zoo, cleared brush and reintroduced native plants at nearby Heron's Head Park, boxed donated groceries at the San Francisco Food Bank, and planted seedlings at the Golden Gate National Parks Conservancy.

On Sept. 10, 24 research chemists were named Heroes of Chemistry by ACS for improving health and well-being by creating new drugs or other products and inventing environmentally friendly and more effective chemical technologies. The awards specifically honor chemical innovators whose work has led to the welfare and progress of humanity in a significant way in the past decade.

The scientists honored were part of multidisciplinary teams representing six companies: ATMI, DuPont, Eli Lilly & Co., Merck, Rohm and Haas, and Wyeth. Individual scientists were nominated by their companies, and the winners were chosen by an ACS panel of experts.

"Heroes save lives and change them for the better," said ACS President E. Ann Nalley. "This year's Heroes of Chemistry have improved our lives through their inventions. We at ACS celebrate them and the corporate management that supports innovations that bring the benefits of chemistry to us all, every day."

Some of the world's most renowned nanoscientists gathered for the four-day symposium honoring Nobel Laureate Richard E. Smalley, who passed away in October 2005. They shared their favorite stories about the nanotechnology pioneer and presented research that traces its roots to Smalley's work with fullerenes and carbon nanotubes. The presidential event was cosponsored by a record 10 divisions. Each speaker was introduced by a student whose meeting registration fee had been paid by Nalley.

The meeting drew 15,603 chemical scientists, students, exhibitors, and guests. In the exhibit hall, 320 exhibitors showcased their products and services in 500 booths, and 29 workshops and theater presentations were held.