Makeover
[+]Enlarge
Credit: Courtesy Of Mad Dog Films
Edwards' classroom was renovated by the Science Channel over the summer. 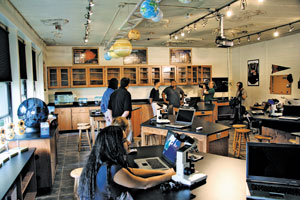 Credit: Courtesy Of Mad Dog Films
Edwards' classroom was renovated by the Science Channel over the summer.

Brad Edwards is the kind of enthusiastic teacher who usually works in his classroom during the summer. But this past summer, school officials told the 32-year-old to stay out of Rahway Middle School in Rahway, N. J., during asbestos removal.

When Edwards walked into Room 321 a week before classes began in September, he learned the real reason he had to stay away. He was the recipient of the Science Channel's "Dream Science Classroom."

Edwards happily didn't recognize a single square inch of his old classroom. The chalkboard had been swapped out for a computer-enabled, touch-sensitive interactive whiteboard. Instead of standard classroom desks, lab tables equipped with laptops, microscopes, and smart technologies such as wireless devices that permit e-instruction awaited students. Three sinks, including one with handicapped access, replace the old one. The room features a safety shower, eyewash station, oodles of storage space, and a portable, self-contained fume hood with an organic filtration system. Ample power outlets line the walls. Special shades slide up and down over the windows with the flick of a finger. A digital projector, fossils, and model planets hang overhead. On the floor is new tile with hues that reflect the celestial landscape.

"The goal was to create an interactive learning center that also has a museum atmosphere," says Eli Kabillio of Mad Dog Films, who produced and directed the makeover show.

"I'm still speechless," Edwards told C&EN on the second day of school. But he didn't waste any time incorporating the new technologies into his classes.

And what do the kids think? "As they walk in, you hear a lot of 'wow' and 'cool,' " Edwards says. "It's a lot to take in for a 12- or 13-year-old. They've never seen anything like it, that's for sure. And that's a function of their experiences and the places they have been able to go with their resources. To see the types of things they are going to be able to use firsthand, there's a lot of amazement."

The room lures parents, too. About back-to-school night held earlier this month, Edwards says, "For most of the evening, parents of students not even in my class were visiting to look at the room." 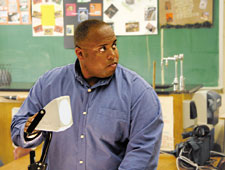 Extreme makeover shows—transforming everything from people to houses—are big television hits on a number of networks, but the Science Channel claims that "Dream Science Classroom" is the first endeavor involving a school. Steve Jacobs of the National Science Teachers Association (NSTA) had the initial idea and presented it to Steve Burns, now the executive vice president of production for Discovery Networks. Concerned about dwindling science literacy in this country, Burns wanted to do something that would showcase science education and thought a classroom makeover would be a good way to provide some visibility and attention, says Allan Butler, executive producer for the Science Channel, which is part of Discovery Networks. They looked for a middle school science teacher, Butler adds, because their research showed that middle school is often the first time students have teachers who specialize in science, and middle school science teachers, who are often new to the teaching profession, can use as much help as they can get.

Finding an inspiring teacher with a classroom in need of a makeover was the next step. The team searched around the New York area for months, Kabillio says. "We found a lot of teachers who were good, but I was just looking for a teacher with that extra special spark," he says. Then Kabillio decided to visit Rahway, his hometown.

When the two met for the first time in May at the school, Kabillio simply told Edwards that he and the camera crew were scouting for a show profiling several great science teachers. Kabillio was impressed with Edwards' enthusiasm and smiling students amid modest classroom conditions. Edwards is such a dynamic instructor, and the new remote technologies perfectly match the way he teaches, he adds.

Edwards didn't start his career as an educator. Growing up in Rahway, he played baseball, took honors classes in high school, and was the first in his immediate family to attend college. After graduation, he took a laboratory chemist position with a contract company and did chemical analyses for Union Carbide.

He says he enjoyed the science but found the industrial environment wasn't for him. Another avenue emerged after an invitation to speak at an annual sports banquet in Rahway. "My old baseball coach asked me if I had ever considered teaching," Edwards recalls. He tested the waters with substitute teaching and has been in his current position since 2000. Edwards also likes the opportunities he has to coach youth sports and organize the middle school's Science Club and Science Olympiad programs.

He draws on his industry experience to prepare for the classroom and for these extracurricular activities—and not just because the Olympiad participants need to learn a little extra organic chemistry. To prepare for a competition, the students also need to learn how to research and solve problems. He finds himself saying, "Well, when I was working in industry, if a situation like this came up, then these are the types of things we might do." Edwards' resources in the school are not so vast as those available in industry, so it is also a chance to encourage his students to be creative.

While observing class, Kabillio asked Edwards for a list of things that he would want in a "dream" classroom. Edwards had coincidentally returned from the NSTA convention in Anaheim, Calif., only a few weeks earlier. Fresh in his mind were myriad new teaching tools and lab classroom set-ups he had seen in the exhibition hall.

Although Edwards initially stood in awe of the renovation the first day he saw it, he continues to find new things in his classroom every time he turns around. When he explored inside the cabinets, for example, he was astounded to find an abundance of supplies he can use to expand the physical sciences unit in Rahway's seventh-grade curriculum.

Not only had a number of companies donated nearly $250,000 worth of new furniture and the state-of-the-art equipment on Edwards' list, but a scientific supply company also contributed thousands of dollars in various prepared student lab kits, including chemistry experiments that illustrate principles of chemical analyses such as chromatography. "Now I have materials that I normally wouldn't have because they aren't necessarily part of the curriculum," Edwards says.

Edwards has needed to do some extracurricular learning himself. "Most of the vendors that provided the equipment have sent one or more people to spend some time instructing me," he says. "It is going to take a while to get totally used to using everything, but as time goes on, I should be pretty comfortable with it all."

Edwards was touched to learn that several of his students had donated their time over the summer to help demolish the old room and get the new one ready for this year.

Will other teachers get the same surprise as Edwards? There's interest, but the decision to create a series depends on the ratings for the pilot program, says Butler of Discovery.

"Dream Science Classroom" will premiere on Oct. 29 at 8 PM EST on the Science Channel.

Periodic Table
Element collecting: A niche hobby that connects people to chemistry
Science Communication
PBS Docudrama Brings Discovery Of The Chemical Elements To Life
Education
C&EN Talks With Christopher Hillenbrand
Share X
To send an e-mail to multiple recipients, separate e-mail addresses with a comma, semicolon, or both.
Title: Dream Science Classroom
Author: Rachel Petkewich
Chemical & Engineering News will not share your email address with any other person or company.