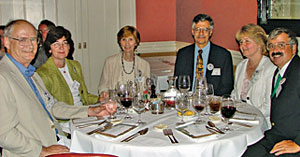 Come hell and high water, the ACS Louisiana Section has been around for a century. The section celebrated its 100th anniversary on June 28 at Galatoire's Restaurant in New Orleans' French Quarter. The section has about 500 members; 40 came to the dinner, a respectable turnout considering much of the city remains devastated by the 2005 hurricanes and not all section members have returned. Some of them still haven't been located.

Some sections have all the luck. In 1906, when the section was founded, New Orleans was also in crisis: It was just coming out of a severe yellow fever epidemic. One can only hope for better in 2106.

The section had contemplated a yearlong program with some of the initial events taking place in the fall of 2005. "Katrina quite literally drowned out any and all local section plans," says Jack Stocker, section councilor and retired University of New Orleans chemistry professor. He describes the frustration and the obstacles. "How could we hold the normal local section fall elections if our members were dispersed throughout the entire country? How could we schedule any event, even centennial preparations, without a reasonable number of the Louisiana Section members available?" he asks.

The few available members of the section's executive committee convened in February 2006. At this meeting, they confirmed Casey Grimm, a chemist at the Department of Agriculture's Southern Regional Research Center and previous chair of the section, as centennial program organizer.

Stocker reports the June 28 celebration began with a social hour that included a convivial open bar, followed by a seating at eight-place tables for an excellent, New Orleans-oriented dinner in a room on the restaurant's second floor, facing a multiwindowed view of Bourbon Street.

The formal program consisted of members providing historical vignettes ranging from stories about noted chemical contributions by local scientists to the strange events that take place when rebuilding a city. Stocker, New Orleans bon vivant, noted that the evening consisted of "excellent food, great stories, and several cases of wine, which ensured that a good time was had by all." 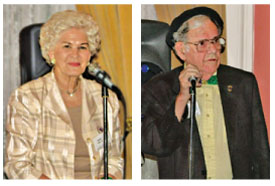 Credit: Deborah Grimm Presidential Nalley addressed the centennial attendees; Stocker shares his opinions on the state of the section.

In addition to local section officers and members, ACS President E. Ann Nalley and Immediate Past-President William F. Carroll attended the celebrations. During the afternoon preceding the festivities, the section provided Nalley and Carroll with a citywide tour of the still pervasive hurricane devastation.

Stories told at the centennial dinner ranged from the humorous to the solemn, including one that was both hilarious and tragic. Al Bopp, chemistry department chair at Southern University, New Orleans, told of having his remaining post-Katrina possessions accidentally hauled off by a debris removal crew and the ensuing foot chase of the offending trash hauler.

The program was concluded by Stocker, who offered six alternative views of the section's current status, ranging from a "Phoenix rising from the ashes accompanied by thunderous drums, to a frightened child looking upwards and saying (somewhat piteously), 'Look Ma, I'm still dancing!' " He settled on one description: "We're a temporarily dysfunctional family that just doesn't know where its children are." He invited the audience to return for the bicentennial celebration and crossed his fingers that a son or daughter of Katrina would not interrupt.

ACS Meeting News
Let’s hear it from the ACS national meeting
Careers
Local section spotlight
Environment
In The Big Easy
Share X
To send an e-mail to multiple recipients, separate e-mail addresses with a comma, semicolon, or both.
Title: Louisiana Centennial
Author: Linda Raber
Chemical & Engineering News will not share your email address with any other person or company.