The economy shows signs of slowing, but firms may be hiring more chemists, engineers 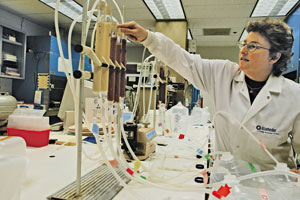 Chemical scientists and engineers looking for jobs in 2007 will find the market a little better than it has been since 2001. Maybe. Chemical company earnings are a bright spot in an otherwise lackluster economy. Whether increased earnings will be sustainable and whether they will translate into significantly more hiring remains to be seen.

Gross domestic product figures, which measure total economic activity within U.S. borders, were released by the Department of Commerce late last month. They indicate that the U.S. economy grew in the third quarter at an annualized rate of 1.6%—the slowest rate in three years. Much of the slowdown is attributable to a slump in the housing market. And U.S. voters, increasingly discontented with many issues, high among them the economy, will cast their ballots in congressional elections. The Republicans may lose their majority in Congress. Who knows what effect this would have on the economy or the chemical industry?

In this issue, C&EN reporters examine various facets of employment in the chemical sciences. Associate Editor Corinne A. Marasco tackles the topic of demand for chemists in industry and in academe. On balance, she reports cautious optimism for increased hiring, particularly for chemical engineers and for chemists with strong skills in the life sciences. Those skills are in great demand in the increasingly inderdisciplinary pharmaceutical industry, the home of most new jobs in the chemical sciences.

But the employment picture for chemists isn't clear. Dow and DuPont, two chemical industry giants that have shared their hiring plans with C&EN in the past, declined to be interviewed this year. Indeed, many employers of chemists and chemical engineers are keeping their hiring plans close to the vest. It is unclear how information from those companies would have affected the overall outlook for employment in 2007.

C&EN Editor-at-Large Michael Heylin reports on the most recent ACS Salary Survey. He describes the employment situation as "by no means a disaster, but it is not great either." The percentage of ACS-member chemists in the domestic workforce who did not have full-time jobs as of March of this year was 8.7%. This number is down a little from its all-time high of 9.2% one year ago but well above the recent low of 5.4% in 2001.

Heylin notes that the outlook for chemists' salaries is "a little better" and that working chemists who have not recently changed jobs are posting salary increases of about 5% per year.

As a special feature this year, C&EN Contributing Editor Susan Ainsworth catches up with eight chemists she had interviewed in a 1995 article on the career plans of Generation X. People in this generation, sometimes called Xers, are those born roughly between 1963 and 1975. Ainsworth's 1995 article noted that Xers expected that their workplaces would foster open communication up and down the corporate chain of command and would promote diversity. They also expected that employees would have time to spend with family and to pursue outside interests.

According to Ainsworth, Xers, who are now in their 30s and early 40s and have become leaders in their workplaces, are "right on target" about many of the predictions they made about their generation. Some of their career paths have been unusual, reflecting Xers' aggressive management of their own career trajectories. 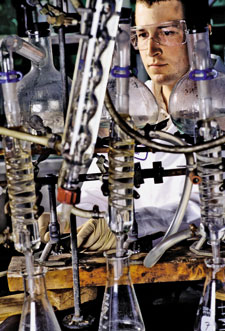 And when one's career isn't progressing as planned, drastic steps can be rewarding. For example, when his career path in academia closed, Paul E. Dietze went to law school and pursued a new career as a patent lawyer. He loves it. Assistant Editor Linda Wang reports that patent law is increasingly populated by highly trained scientists who spend their time writing and processing patent applications to be submitted to the Patent & Trademark Office or going court to defend or attack the validity of an existing patent.

Although a Ph.D. is not a prerequisite for practicing patent law, according to one lawyer Wang interviews, the ideal candidate for a top position in a patent law firm is a Ph.D. biochemist with a couple of years as a law clerk for a federal judge. All indications are that the field is growing.

Scientists are also taking advantage of their entrepreneurial instincts to create unique and frequently lucrative businesses. Assistant Editor Rachel Petkewich reports general agreement among entrepreneurs that time and money are vital ingredients when starting a new company, but so are good bookkeeping skills and the flexibility to deal with inconsistent income. An entrepreneur starting up a business needs to be able to do whatever needs to be done, from technical sales to cleaning the bathroom, and must be able to network and ask for help from more experienced people. After that, people use different formulas to start their own businesses.