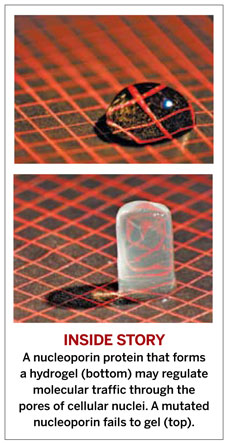 A cell's nuclear envelope is like a building with thousands of screen doors. Called nuclear pore complexes (NPCs), these gateways control entry to and exit from the nucleus. The basis of this life-sustaining selectivity remains a matter of debate, but new evidence suggests that the central canal of NPCs may be filled with a protein gel bearing molecular motifs key to the pores' selectivity (Science 2006, 314, 815).

NPCs allow free passage of water, ions, and metabolites and other small solutes while carefully controlling the comings and goings of big molecules such as messenger RNA and proteins. The only way molecules larger than about 30 kilodaltons can pass through NPCs is by hitching a ride with nuclear transport receptors (NTRs), a class of proteins with an open invitation to traverse nuclear pore complexes. These shuttling runs, up to 1,000 per second for a single NPC, are perpetrated via interactions between the passenger-carrying NTRs and a common repeating motif in nuclear pore proteins, or nucleoporins, explain Dirk Görlich, Steffen Frey, and Ralf Richter of the University of Heidelberg. These so-called FG repeats, rich in the amino acids phenylalanine (F) and glycine (G), consist of hydrophobic segments linked by hydrophilic segments.

To probe how these structures might be behind NPCs' molecular gatekeeping, the researchers cloned and manufactured a key, FG-repeat-rich nuclear pore protein. At high pH, solutions of this yeast nucleoporin protein remain liquid. But at physiological pH, the protein forms hydrogels with a consistency that Frey likens to that of gummy bear candies. "Remarkably, the gels remained stable and unaltered in appearance when the temperature was raised to 95 oC," the researchers note.

To investigate biochemical and physiological properties of the FG-repeats, the scientists generated mutated versions of the yeast nucleoporin and studied the effects that the changes had on the protein's function and on the viability of yeast cells expressing the mutated versions. They found strong evidence that a hydrogel-forming pattern of these motifs is essential for the survival of yeast cells.

The protein's hydrogel properties lend credence to a "selective phase" model for NPC function, the researchers suggest. In this model, NTRs carry their big-molecule cargo through pores because their specific interactions with FG-repeat regions enable these cargo-loaded units to essentially dissolve into the gelled interior of the pores. Then, with a rapid series of hand-off interactions, the NTR-cargo units steam through the pore, the gel healing itself continually behind the passing complex.

"Understanding the polymer physics of the nuclear pore may inspire biomimetic materials or technological devices to capture specific macromolecules from a mixed solution," suggests materials scientist Michael Elbaum of Weizmann Institute of Science, in Rehovot, Israel, in a commentary accompanying the Science article.