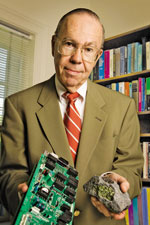 When he went to work at AT&T's Bell Laboratories in Murray Hill, N.J., in 1969, Thomas E. Graedel was a newly minted Ph.D. astronomer thinking about planets and solar systems. Today, he's an international expert in industrial ecology, a relatively new field of science he helped establish that focuses on the more down-to-earth topic of using systematic analysis of manufacturing industry operations to optimize the use of natural resources and minimize pollution.

Graedel's career, like that of many scientists, has taken a few twists and turns. He started out as a chemical engineering student, receiving a B.S. from Washington State University. But he was enamored with astronomy, a leaning that caused him to quickly change directions. Because he didn't have enough physics courses under his belt, Graedel completed a master's degree in physics at Kent State University, in Ohio, before heading to the University of Michigan, where he added M.S. and Ph.D. degrees in astronomy to his résumé. Graedel worked at Bell Labs until 1996, when he began a second career as a professor of industrial ecology at Yale University.

When Graedel joined Bell Labs, he was put to work as part of a team exploring the technical issue of how ionization of the upper atmosphere might interfere with the communications of a system AT&T was designing for the U.S. antiballistic missile defense program. The AT&T project was canceled after two years, but the Clean Air Act had just been passed and was expected to have a great impact on the AT&T Bell System, which was the world's largest private business enterprise back then. Graedel and his colleagues had learned as much about atmospheric processes as anyone at the time, he says, so they were reassigned to help the company make sure it was responding favorably to the Clean Air Act and the subsequent Clean Water Act.

"I became a researcher looking at the degree to which the electronics industry needed to respond to environmental concerns related to metals used in communications and the chemicals involved in the manufacture of electronics," Graedel says. "It became apparent to a number of people in different industries that, even though we were complying with regulations, in the broader scheme of things we continued to use energy and materials derived from nonrenewable resources and generate by-products and wastes at rates greater than were necessary."

By the late 1980s, this new way of thinking of industrial operations as "an ecosystem with a distinct metabolism" was evolving into the field of industrial ecology. Early leaders in the discipline included Graedel and his colleagues at AT&T; Robert A. Frosch at General Motors (now at Harvard University); Robert U. Ayres at INSEAD, the global business school based in Fontainebleau, France; as well as scientists at Motorola and Dow. For most companies, industrial ecology broadened the traditional role of environmental health and safety operations by adding elements of pollution prevention and global sustainable development through product design, Graedel notes. For chemists and chemical engineers, industrial ecology is closely aligned with green chemistry and green engineering.

"Sustainability stretches our thinking in all sorts of directions," Graedel points out. "Industrial ecology provides operational tools such as product life-cycle analysis to address the expanded perspective of sustainability. It's a big-picture view of technology, of how one company's by-product or waste can become another company's raw material."

Graedel developed an environmental assessment matrix at AT&T to assist in product and process design. "We were thinking about interactions with our design teams at AT&T," Graedel recalls. "They were perfectly willing to think about environmental concerns in their designs, but they didn't have the training and there was little written guidance." The matrix lists a variety of environmental issues, such as energy use or air emissions, for various product life stages ranging from raw materials to end-of-life recycling. Versions of this relatively simple tool are now used around the world.

While with AT&T, Graedel became an expert on chemical degradation of metals in the atmosphere, particularly copper and silver, and he helped develop the first computer model to study those problems. This knowledge came in handy in the mid-1980s, when Graedel and AT&T colleague John Franey served as consultants to the restoration project for the copper-skinned Statue of Liberty.

One of the "big and exciting" developments now going on in industrial ecology is that many research groups are generating lots of data, so the field is moving from being largely conceptual to being increasingly quantitative, Graedel says. "It goes back to the old line that until you put numbers on something, you can't really understand it effectively," he notes. "As a field, we are now generating enough information to begin model building and scenario construction, so as to visualize in detail how resources are used and how technology interfaces with culture."

Graedel's contribution in this area has been to evaluate stockpiles, use, and recycling of metals such as copper, zinc, iron, and chromium (Proc. Natl. Acad. Sci. USA 2006, 103,1209). "It's really quite undesirable once you have put effort into processing a material to use it only once and throw it away," he observes. "We have started to find that we have as much of some metal resources above the ground as we have in the ground. When metal products go out of use, we need to do a better job of grabbing them for recycling. This also means we need to be doing a better job of product design to allow for this recovery."

Graedel reemphasizes his hope that industrial ecology will help scientists come to realize that resources of many kinds "have natural limits and that we need to implement technologies with knowledge and respect for those limits."