$3.7 billion acquisition is targeted at the lipid management market 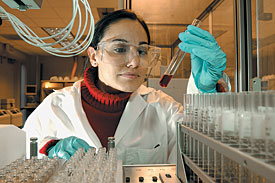 Abbott Laboratories has agreed to acquire the specialty drugmaker Kos Pharmaceuticals for $3.7 billion. Kos, based in Cranbury, N.J., sells products designed to manage levels of "good" and "bad" cholesterol.

Kos's two main products are Niaspan and Advicor. Niaspan, launched in 1997, is an extended-release form of the vitamin niacin, which raises levels of high-density lipoprotein (HDL), or good cholesterol. Four-year-old Advicor combines Niaspan with lovastatin, the first in the statin class of drugs, which lower low-density lipoprotein, or bad cholesterol.

These and other products brought in sales last year of $752 million, a 51% increase over 2004 sales. Kos's drug pipeline holds a new Niaspan formula, now under FDA review, that reduces the facial flushing associated with niacin. Also in development is Simcor, a combination of Niaspan and simvastatin, the active ingredient in Merck's statin drug, Zocor. Kos expects to submit Simcor for FDA review next year.

With the purchase, Abbott is looking to build on its success with the lipid management drug TriCor, a Solvay product that Abbott markets in the U.S.; sales last year were $927 million. In July, Abbott and AstraZeneca announced plans to develop a new combination product that joins AstraZeneca's statin drug, Crestor, with either TriCor or ABT-335, an HDL-raising drug that Abbott is developing.

Robert Hazlett, a stock analyst with BMO Capital Markets, is bullish on the Abbott-Kos combination despite stiff competition from the likes of Merck and Pfizer. "We believe Abbott's success with TriCor bodes well for its potential with the Niaspan franchise," he wrote in a note to clients.

Generics
Sonorant debuts as Mallinckrodt spins off generics
Business
Pfizer mulls sale of consumer business
Pharmaceuticals
Pfizer discontinues work on bococizumab
Share X
To send an e-mail to multiple recipients, separate e-mail addresses with a comma, semicolon, or both.
Title: Abbott to Buy Kos
Author: Michael McCoy
Chemical & Engineering News will not share your email address with any other person or company.