Many companies tolerate risky practices that may lead to deadly accidents, chemical safety board says 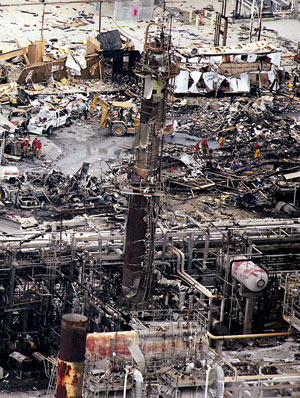 A crisis in "corporate cultural behavior" created conditions that led to the deaths of 15 workers and injuries to 180 more at BP's Texas City, Texas, refinery, says the head of the Chemical Safety & Hazard Investigation Board (CSB). Carolyn W. Merritt points to a history of corporate cost cutting that resulted in maintenance, safety, and plant infrastructure deterioration.

"The experience at BP should serve as a cautionary tale to every oil and chemical company," says Merritt. "The problems at BP are not unique to one refinery, one division, or one corporation."

She points to a growing acceptance of high-risk industrial operations by U.S. corporations. She warns that this behavior is establishing a dangerous pattern throughout industry.

At BP, company spokesman Neil Chapman, says: "There was a culture where people at the refinery accepted higher levels of risk than they should have, and there was no feedback loop from past incidents. There was an acceptance of people not following the correct procedures that were laid down.

"We agree that the explosion and fire was a preventable tragedy," he continues. "We are deeply sorry for what occurred and for the suffering, and we are working to make the future far more secure for the families of those who died."

BP has set aside $1.6 billion to settle more than 1,000 claims against the company. Chapman says the firm has reached settlements with all family members of deceased workers except one. That trial is set to begin this month.

The deadly accident that is drawing CSB's concern took place on March 23, 2005, when BP started up the refinery's octane-boosting isomerization unit. Refinery workers inadvertently overfilled a distillation tower and blowdown drum with highly flammable hydrocarbons. The overfilling caused the distillation tower to overpressurize and forced the opening of three emergency relief valves that vented to the old, undersized blowdown drum.

The drum, intended to capture excess hydrocarbons, quickly reached capacity and had no safety system to address excess filling, despite the fact that BP had 58 different relief valves venting to the same antiquated blowdown drum, CSB said in a statement.

A geyser of hydrocarbons blasted to the air, was ignited, and exploded, killing and injuring workers who were housed in several office trailers that had been temporarily located in the midst of the refinery.

On eight previous occasions between 1994 and 2004, the same blowdown drum had released hydrocarbons to the environment. Two releases caught fire. Plant procedures in place since 1977 stated that the firm's blowdown drums should have been replaced with more advanced systems, CSB says.

Amoco, which owned the refinery and merged with BP in 1998, had been cited by the Occupational Safety & Health Administration in 1992 for operating an unsafe blowdown drum at the plant. However, the company dodged the citation by successfully arguing to OSHA that the drum was sufficient. It justified its position by pointing to an industry practice guideline prepared by the American Petroleum Institute (API), a trade association.

CSB is now urging API to drop or rewrite the guideline and OSHA to initiate a national program to eliminate the use of such blowdown drums. CSB wants these systems to be replaced with what it calls "inherently safer alternatives," such as systems that capture and flare excess hydrocarbons in emergency situations.

Merritt called the BP accident a "perfect storm" in which aging infrastructure, overzealous cost cutting, inadequate design, and risk blindness all converged. The result, she says, "is the worst workplace accident in more than a decade."

But she adds, "No company should believe it is immune to what happened to BP."

Merritt travels the country making frequent speeches to corporations describing what she has learned through CSB's investigations, she tells C&EN.

"I've probably given this speech hundreds of times, and invariably, someone will hear it and come up to me and say, 'You've got to come to our company and give this presentation.'

"We find a failure to have the expertise on staff to recognize hazards; a failure to maintain adequate funding for maintenance, training, and staffing levels; a general loss of corporate knowledge and experiential learning due to downsizing; and a failure of management to pay attention to warning events such as near accidents.

"We find in so many of our investigations that there are hundreds of events that should have been triggers or warnings to management if they were paying attention to the event that caused the catastrophe," Merritt continues.

CSB investigators, she says, find in company files multiple documents that show someone at the plant identified and was concerned about a potential accident. She points to audit reports, engineering studies, safety committee reports and questions, employee complaints, and technical documents that warned about the very event that created the catastrophe, but management chose not to pay any attention.

In BP's case, internal documents obtained by CSB show that economic pressures pushed the company to avoid eliminating the blowdown drum, despite more than a decade of warnings. The company also reduced its safety training staff from 30 to eight and cut its training budget in half from 1998 to 2004.

In November 2004, the refinery manager held a meeting for 100 supervisors, where he gave a sobering presentation of plant difficulties. He noted the 23 plant deaths over the previous 30 years, an average of one worker dying every 16 months.

At the same time, however, BP was also reporting the lowest injury rate in its history at the plant, saying it was only one-third of the refinery sector's average, Merritt says. The injury rate, however, did not take into account catastrophic hazards or distinguish between deaths and injuries. In 2004, the Texas City plant had three major accidents where three workers died.

However, Merritt notes that BP management did take safety actions, but they focused on personnel safety—slips and falls—not process management improvements to avoid major accidents. Just eight days before the deadly 2005 accident, an internal company audit found significant safety problems that pointed to systemic risks to workers. Similar reports were issued in 2003 and 2004, CSB says.

Merritt stresses that CSB relied on information from BP's internal files for much of the information the board is reporting. Despite the investigation, she says the board has developed a good working relationship with BP.

At the board's urging, BP has created an 11-member independent panel to investigate the accident. The panel is made up of process safety experts and led by James A. Baker III, a top executive-branch official in several Republican Administrations. The board called for the independent panel when another fire occurred at the refinery four months after the deadly 2005 explosion.

The company also conducted its own study and released its report last December. Chapman stresses that the company has shared everything with CSB.

"We promised to share all our findings, not only for our own benefit but particularly for the benefit of the industry," Chapman says. "We don't fully understand the basis for some of CSB's comments, but we will withhold our comments until the full CSB report is done and we see the basis for all its views." The CSB report is expected in March 2007.

The company also quickly agreed to CSB's first recommendation, made shortly after the accident, to move all the trailers away from process equipment. Merritt adds that the recommendation was made industry-wide and has resulted in similar changes at many other companies.

BP has also entered a settlement with OSHA to resolve more than 300 separate alleged violations of safety regulations, agreeing to pay $21.3 million in fines and take several corrective actions.

The BP accident marks the 44th formal investigation CSB has undertaken since it was created under the 1990 Clean Air Act amendments. The board has no regulatory power but is charged with investigating the root cause of chemical accidents. The depth of the investigation and the many recommendations demonstrate how seriously Merritt takes her role as head of CSB.

Merritt began leading the five-member board in 2002 as it recovered from a disruptive time when it had operated with a small staff, inadequate funding, and internal management difficulties.

In an interview just after her appointment, Merritt promised to make CSB become "externally focused," with board members leading investigations and also engaged in public speaking and outreach to corporations, communities, and unions (C&EN, Sept. 16, 2002, page 18).

"The really cool thing about CSB is that we are developing a great body of work," she says. "When we had only a half-dozen completed investigations, it was hard to see a commonality, but now we have completed almost 40 investigations and are seeing a pattern of causes that lead to accidents.

"The board has gone through a tremendous amount of learning," she says. "This is really what we are about—finding out what caused an accident and getting it out to the broadest possible audience so they can learn from the experience of others and prevent accidents from happening in their own operations. I think companies are starting to pay a lot of attention."

Safety
Oversight Fight
Safety
Safety Board Backlog Remains
Safety
Full Agenda For Safety Board
Share X
To send an e-mail to multiple recipients, separate e-mail addresses with a comma, semicolon, or both.
Title: BP Explosion Under Scrutiny
Author: Jeff Johnson
Chemical & Engineering News will not share your email address with any other person or company.