French chemist carries out phosphorus research with one foot in the U.S. and the other in China

Linking Continents
[+]Enlarge
Credit: Courtesy of François Mathey
Mathey (center) poses with Duan (third from left) and other members of his research group at Zhengzhou University. 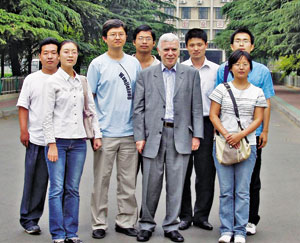 Credit: Courtesy of François Mathey
Mathey (center) poses with Duan (third from left) and other members of his research group at Zhengzhou University.

What does a renowned French chemist do when he is transplanted to California and then offered a research opportunity at a Chinese university? The answer, for François Mathey, is to continue his successful research program in phosphorus chemistry by building a new research group from scratch with labs first at the University of California, Riverside, and then at Zhengzhou University in China.

An academic scientist leading a research group based in two countries, especially when one of the countries is China and the researcher is not Chinese, is an unusual situation.

Mathey's odyssey began in November 2003 when, at age 62, in anticipation of mandatory retirement, he left école Polytechnique, Paris, to join the chemistry faculty at UC Riverside. Mathey also was a scientist with the National Center for Scientific Research (CNRS), which is France's national research agency.

"I did not want to retire, but this is the rule for CNRS scientists when they reach 65," he says. The transition meant leaving behind his family, which now spends part of the year with him in California and part of the year in France. "Life is hard sometimes," he remarks.

The move was made possible because fellow Frenchman Guy Bertrand had been persuaded to join the UC Riverside chemistry department in 2001. The university had just built a new chemistry building, and the department was eager to continue expanding its program.

Bertrand, who is noted for his work in main-group chemistry, particularly carbenes and diradicals, was director of CNRS's Laboratory of Fundamental & Applied Heteroatom Chemistry, in Toulouse. He didn't want to completely sever ties with CNRS, so the two institutions forged the UCR-CNRS Joint Research Chemistry Laboratory. This union allows researchers to make UC Riverside their permanent home while maintaining their affiliation with CNRS. Currently, four CNRS scientists are working with Bertrand and Mathey at UC Riverside.

"I believe our program is a model for the future of academic research, and François is expanding this idea even further," Bertrand says. "The results of academic research are available for humanity. Who cares if the research has been done in the U.S., in Europe, or in Asia?"

As part of their research, Bertrand and Mathey joined UC Riverside chemists Christopher A. Reed and Pingyun Feng to establish the Center for S&P Block Chemistry. The four groups focus their work on elements in groups 13 to 16 having s and p valence shell electrons—chemistry at the border between organic, organometallic, and inorganic chemistry.

Mathey arrived at UC Riverside and found a "modern, well-kept campus with up-to-date equipment," he says. "People were helpful, so my orientation was relatively easy. And contrary to my expectations, my teaching started smoothly because the students were tolerant of my poor English and my strong French accent."

But Mathey began his tenure there with essentially the same resources and problems as a young assistant professor, he says. "I soon discovered the frantic quest for financial support that rhythms the life of any research group in the U.S.," he observes. "It spoils somewhat the pleasure of doing research and prevents the development of unfashionable ideas."

One day, Mathey was complaining about funding to Chinese postdoc Zheng Duan, who suggested that Mathey "outsource" by building a satellite research lab at Zhengzhou University, Duan's alma mater. "After all, why not?" Mathey recalls thinking at the time. Mathey established contact with the university's chemistry department chairman, Mingsheng Tang, which led Mathey to visit Zhengzhou in September 2005.

Zhengzhou, the capital of Henan province, is a "rapidly modernizing" city of 6 million people with a university that hosts some 50,000 undergraduate and graduate students on a new campus, Mathey notes. "As elsewhere in China, economic growth in Zhengzhou is phenomenal," he adds. "I received a warm welcome and, at the end of my stay, an official offer from the university to build and run a laboratory, with all the necessary financial support."

The university is providing Mathey $1 million over five years to develop the lab, which will go a long way in China, he says, especially because the university also will pay the salaries of the lab members. Changyu Shen, president of Zhengzhou University, followed up with a visit to UC Riverside to meet with Chancellor France A. Córdova to affirm the agreement.

Mathey is expected to spend three months a year in China. He recently spent September at Zhengzhou, buying instruments and equipment and doing some teaching in English. If everything goes well, the 10-member Chinese lab, which will be led by Duan, should be in full operation by next March, he says.

Mathey's research has focused primarily on incorporating a single phosphorus atom into aromatic carbon ring systems, with much of this work centered on five-membered phosphole rings. His group has recently reported on novel iminophospholide ligands (J. Am. Chem. Soc. 2006, 128, 7716) and on polythiophenes with three-membered phosphirene ring spacer groups (C&EN, Sept. 18, page 12).

At the moment, most of the exchange between China and Western countries involves students going to the West, Mathey notes. But promoting the exchange of ideas and collaborations among faculty and researchers is going to be increasingly important as China continues to become more integrated into the developed world and more of its students return home to start their careers, he says. China is currently eager for highly regarded scientists like Mathey to help improve the prestige of its universities.

Though the Chinese government is willing to put up financial resources to drive these interactions, there has been some tension among Chinese academics (Science 2006, 313, 1721). Some critics suggest part-time Chinese researchers whose primary work is based in a Western country are not spending enough time in China. And some criticize the efforts for spending money on scientists from other countries, instead of spending more money on Chinese students and faculty.

Mathey says he is provided a salary to pay for living expenses for the time he is in China, but the main funding he is receiving is for equipping and running the new lab. His work is not related to the Chinese Ministry of Education or the Chinese Academy of Sciences programs that have been in question, he says.

"The Chinese are fond of saying: 'We are the factory of the world. We want to become the laboratory of the world,' " Mathey relates. "And by chance, the UCR Center for S&P Block Chemistry is going to be part of this. Running two research labs across the Pacific from each other is going to be very exciting. If I have advice to anyone else interested in such an adventure, it is to ask, to discuss, and to try."

Postdocs
Chinese chemistry Ph.D. grads are forgoing U.S. postdocs
Policy
China’s Scientists Seek Less Government Interference In Their Work
Environment
ShanghaiTech Aims To Raise The Bar For Higher Education In China
Share X
To send an e-mail to multiple recipients, separate e-mail addresses with a comma, semicolon, or both.
Title: A China-California Connection
Author: Stephen K. Ritter
Chemical & Engineering News will not share your email address with any other person or company.