Beckman Coulter will acquire Lumigen for $185 million in cash. The Southfield, Mich.-based Lumigen develops and sells detection chemistries for high-sensitivity testing in clinical diagnostics and life sciences research. Lumigen had revenues of $33 million in 2005; about 40% of these came from sales of chemiluminescent substrates to Beckman Coulter for use in its Access family of immunoassay systems.

(1) Varian's new 320-MS quadrupole mass spectrometer is available either as a triple quadrupole or as a single quadrupole that can later be upgraded. It has a mass range of up to 2,000 daltons and detection limits in the femtogram range. Users can switch between liquid and gas chromatography formats. The instrument features electronic control of atmospheric pressure ionization.

GE Healthcare is offering a new chemistry system called FASTlab for synthesizing radiopharmaceuticals for positron emission tomography studies. PET allows the quantitative diagnosis of disease at the cellular and molecular levels. The FASTlab system employs a single-use cassette containing premeasured quantities of the chemicals needed for synthesis. According to the company, this makes the system easy to use and results in high yields and high reproducibility. FASTlab is designed to handle different chemistries for producing different PET radiopharmaceuticals. GE Healthcare plans to expand the system to include its proprietary diagnostic imaging agents.

PerkinElmer has announced two new FT-IR imaging systems, the Spotlight 400 FT-IR and the 400N FT-NIR. The Spotlight 400 instruments use linear array detector technology that allows larger sample sizes and increases the IR spectral range. In addition, they are designed to operate unattended for long periods of time. Such infrared imaging systems have a wide range of applications, including product defect analysis, product formulation, trace evidence testing, and biomedical research.

(2) Joint-venture partners Applied Biosystems and MDS Sciex have introduced the Amino Acid 20/20 Analyzer, based on the companies' triple quadrupole mass spectrometers. The amino acids are labeled with ABI's iTRAQ reagents, which tag primary amines, for quantitative analysis. According to the companies, the Amino Acid 20/20 Analyzer is more than twice as fast as the chromatography systems conventionally used for amino acid analysis. Such analysis is typically done for quality control of biopharmaceuticals and assessment of nutritional values in food, beverages, and animal feed.

The Swedish company MIP Technologies, which develops molecularly imprinted polymers (MIPs) for separations at all scales, announced that it has supplied another company with kilogram quantities of MIPs for solid-phase extraction. These materials incorporate artificial receptor sites within polymers for separations applications such as solid-phase extraction. Typically, MIPs are produced at the gram level. "Our extensive efforts in the development of robust methods for synthesis of MIPs at the kilo level have now created a path to production at the process level," says Anthony Rees, company CEO. 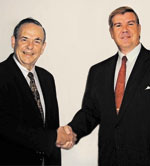 Inside Instrumentation is written by Celia H. Arnaud and Ann M. Thayer. Contact them via e-mail to instrumentation@acs.org.