SPEEDY
[+]Enlarge
A new organocatalyst (above arrow) permits a range of enantioenriched, derivatized cyclic compounds to be produced from simple organic starting materials.

A new organocatalyst (above arrow) permits a range of enantioenriched, derivatized cyclic compounds to be produced from simple organic starting materials.

Organocatalysts (organic compounds that catalyze organic reactions without the use of metals) are becoming increasingly popular. That's because they are readily available and inexpensive, sometimes permit new types of reactions to be carried out, and don't contaminate products with metals as do traditional metallic catalysts. Organocatalysts typically must be used in large amounts, however, and the reactions they drive often are limited in scope.

Assistant professor of chemistry Jeffrey W. Bode and coworkers at the University of California, Santa Barbara, now report an unusual case in which an organocatalyst can be used in small quantities to accelerate reactions of broad synthetic scope, yielding a wide range of derivatized products (J. Am. Chem. Soc., DOI: 10.1021/ja066380r).

Bode's group has been developing new organocatalytic reactions promoted by N-heterocyclic carbenes (NHCs). Earlier, the researchers described highly enantioselective NHC-catalyzed reactions of enals and α,β-unsaturated imines (J. Am. Chem. Soc. 2006, 128, 8418). In their new report, they have considerably expanded the scope of this transformation. The newly reported reactions, called oxodiene Diels-Alder reactions, produce a range of products with less than 1 mol % of a chiral NHC organocatalyst and feature outstanding enantioselectivities (usually greater than 99% enantiomeric excesses) and short reaction times. 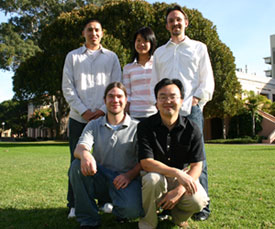 "This process affords a diverse set of [asymmetric] 3,4,6-trisubstituted dihydropyran-2-ones from readily available starting materials under mild, simple conditions," the researchers write. "This is an unparalleled example of a highly enantioselective, intermolecular C–C bond-forming reaction" catalyzed by such a small amount of organocatalyst.

According to Bode, the need for large amounts of organocatalysts, usually 5–20 mol %, has been a long-standing limitation and source of criticism of the organocatalysis field. "We believe our work is one of the first broad demonstrations that enantioselective organocatalysis can proceed with the low catalyst loadings often enjoyed by transition-metal-catalyzed processes," he says.

The new catalyst "might be useful for the life-science industry for the synthesis of biologically active compounds under easy and simple reaction conditions," comments organocatalyst specialist Karl Anker Jørgensen of Denmark's Aarhus University.

Chemistry professor David Evans of Harvard University, who specializes in organic reaction discovery, says "any new diastereoselective C–C bond construction has substantial value to the synthesis community. When such reactions can also be made both catalytic and enantioselective, the value simply rises further. The observation that the Bode group's catalysts are effective below 1 mol % is striking."

Organic chemistry professor Carsten Bolm of the RWTH Aachen University, Aachen, Germany, a specialist in asymmetric catalysis, says that the new findings are "most remarkable." Efficient asymmetric catalysis requires both high enantioselectivity and low catalyst loading, Bolm notes, and the new technique is unusual in satisfying both requirements. "This discovery gives hope that even more complex chiral organocatalysts will soon find application in multistep enantioselective total synthesis," he says.

Catalysis
Snagging the power of cyclic allene intermediates
Synthesis
Catalyst closes a gap in hetero Diels-Alder reaction
Synthesis
Amides Succumb To Suzuki–Miyaura Coupling, Thanks To Nickel Catalyst
Share X
To send an e-mail to multiple recipients, separate e-mail addresses with a comma, semicolon, or both.
Title: Reactions Need Just A Pinch of Organocatalyst
Author: Stu Borman
Chemical & Engineering News will not share your email address with any other person or company.