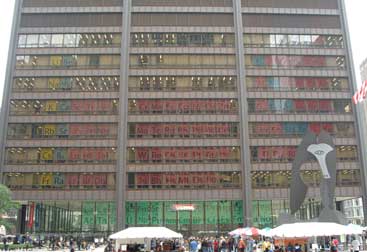 The world's largest periodic table made its debut in Chicago on Sept. 22 at the kickoff event for a two-week citywide science education and awareness program. The giant chart, which stands eight stories tall and some 200 feet wide, consists of 111 posters, each displaying the symbol and atomic number of a chemical element and occupying most of the windows of one face of the Richard J. Daley Center, a prominent Chicago building.

The larger-than-life table was unveiled at the opening of the first annual Chicago Science Expedition, which was organized to emphasize the importance of science "not only in the classroom but in everyday life," according to Michael Davis, an assistant chemistry professor at Chicago's Harold Washington College and one of the event planners.

On opening day, passersby were drawn to the large plaza below the periodic table display, where a setup like a state fair provided Chicagoans with an opportunity to visit booths and observe and participate in scientific and technical demonstrations that addressed chemistry, physics, robotics, and other areas. The booths were staffed by science educators and representatives of local museums, scientific companies, and other institutions.

The day was also marked by presentations from Chicago Mayor Richard M. Daley and space shuttle astronaut and Chicago public school graduate Mae Jemison, the first African American woman to participate in a space mission. Those speakers and others emphasized the importance of exposing children to science at a young age. "Too many Americans are simply afraid of science," Daley remarked, because they find the subject too difficult and uninteresting. "But science is interesting,??? he insisted. The mayor and others encouraged families to visit museums as a way of promoting children's enthusiasm for science, engineering, and mathematics.

Dubbed by organizers as "two weeks' worth of wow," the science awareness program, which continues through Oct. 8, features special library and museum exhibits and hands-on scientific demonstrations throughout Chicago. The events also include formal speaking engagements by noted scientists and informal chats concerning science education and other topics at local Starbucks cafes and book stores.

Davis said he came up with the idea for the periodic chart while walking around downtown Chicago thinking about a "grand marquee event" to publicize the festivities. He noted the ample size of the plaza in front of the Daley Center and began considering how many windows would be needed to construct a periodic table. Showing his true colors, Davis says "I pulled a periodic chart out of my wallet and counted the rows just to be sure it would fit."

To help spread the word about science education, Davis encouraged local businesses and other institutions to sponsor an element and write short essays outlining the significance of their choices. The collection of essays was published in the Chicago Sun Times.

Explaining his motivations, Davis said "I wanted to turn all of Chicago into a classroom and use the periodic table as a giant teaching tool." The explanation caught the attention of a local waiter who noted, "It's the world's greatest cheat sheet, if you know how to use it."

Meetings
Committee on Chemists with Disabilities debuts accessible periodic table
Periodic Table
The International Year of the Periodic Table officially kicks off in Paris
Education
Candy-Coated Chemistry
Share X
To send an e-mail to multiple recipients, separate e-mail addresses with a comma, semicolon, or both.
Title: Giant Periodic Table Unveiled In Chicago
Author: Mitch Jacoby
Chemical & Engineering News will not share your email address with any other person or company.