Astronaut, medical doctor, dancer, entrepreneur, actor, science communicator—is there anything she can't do? 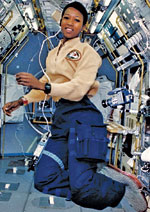 Mae Jemison has run experiments in space as the National Aeronautics & Space Administration's first female African American astronaut and beamed people on to the Starship Enterprise as an actor, but these high-altitude feats barely scratch the surface of her accomplishments here on Earth. Jemison is also a medical doctor, dancer, technology entrepreneur, and science communicator. She speaks Russian, Swahili, and Japanese, too.

[+]Enlarge
Credit: Pam Francis ©2007
Jemison today and in 1992 (top), performing experiments at zero gravity on board a space shuttle.

Credit: Pam Francis ©2007
Jemison today and in 1992 (top), performing experiments at zero gravity on board a space shuttle.

Chatting with C&EN in a hotel room on a chilly February morning in Washington, D.C., Jemison is a formidable woman who exudes a calm competence.

At 50, she describes her myriad successes as the sum of many small moments, where people around her encouraged her, challenged her, or simply acted as excellent role models. For inspiration, she points to an uncle who introduced her to astronomy as a child and to her mother who challenged her to read history and philosophy-not just science fiction—in her adolescence. She even acknowledges her four felines.

"Cats are very social creatures, or they can be by themselves. Both of these skills are very important," she says. "They are also very determined and know exactly what they intend to do."

Jemison began her scientific career in 1973, at the age of 16, when she moved from her hometown of Chicago to Stanford University, to pursue chemical engineering and African American studies. "As a girl growing up, I knew I wanted to study science, but I also wanted to dance, do art, travel, and explore," Jemison says. These diverse interests led to "a crisis point" in her life during her senior year of college. Having danced and choreographed professionally during her time in California, Jemison had to choose between pursuing medical school or modern dance in New York City.

Medicine won, and after a stint as a general practitioner in Los Angeles, she worked for the Peace Corps in Sierra Leone and Liberia as a doctor. This stint in the developing world, which she intended as a professional tangent, inadvertently turned into the key to her successful NASA application. While in West Africa, "I was responsible for people 24 hours a day, on my own, and that was a valued skill for NASA," Jemison says. "The moral of story is that if you pay attention to what you want to do in the present, sometimes what you want to do in the future is achieved in unexpected ways.

"Growing up in the Apollo era, I thought we'd have people on Mars by now and that I'd just go to work as a space traveler," Jemison says. "As an adult, I realized to get to space I'd have to be an astronaut." After an initial rejection, Jemison was accepted into NASA's space program in 1987 on her second try. She blasted into space in September 1992 for an eight-day science mission. As NASA's first science mission specialist, she performed a variety of experiments and coordinated with scientists on the ground.

"The challenge for doing research in space stems from the fact that you can't really go back and get a different reagent if you didn't take it with you," she says. "You can maybe modify your equipment a tiny bit, but not too much, because it is integrated with a lot of other electronics."

She says there's a delicate balance to narrowing down what lab equipment you bring, but not "so much that you will only capture that one thing you planned for—even if something else is waving its hand at you."

After her stint at NASA, Jemison spent seven years as an environmental studies professor at Dartmouth College, which allowed her to study sustainable development and how culture impacts technology, politics, and policy. She's currently a professor-at-large at Cornell University while living in Houston.

Nowadays, Jemison spends a lot of time working with Biosentient, her biotech start-up that is developing devices to measure the wearer's vital signs. She has another tech company focused on bringing solar thermal generators and satellite-based communications to the developing world.

Jemison is also a frequent speaker about science literacy and diversity, not only as a spokeswoman for the science education programs of the chemical company Bayer but also through programs she herself has founded. These include an international science camp where teenagers discuss solutions to global dilemmas, such as the number of humans Earth can sustainably support.

"I also like to endanger the life of plants—it's a hobby called gardening," Jemison says. She continues to dance, taking lessons in everything from ballet to traditional Japanese dance, the latter challenged by the task of finding a kimono long enough to drape along the entirety of her 5-foot-9 frame.

In all aspects of her life, Jemison systematically connects science with social justice, from her years working for the Peace Corps to her current science literacy work. Even her gig on "Star Trek" links to that philosophy. "Besides being a big fan, the reason I wanted to act in an episode [of "The Next Generation"] is that the show has always told the story of a hopeful future, where social issues are addressed in the context of different technologies. The show has told how both can move forward at the same time."