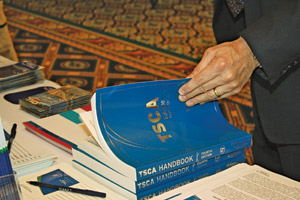 DOING MORE WITH LESS is a mantra for the staff of the Environmental Protection Agency's New Chemicals Program. Staff members are figuring out how to finish agency reviews of new commercial chemicals more rapidly and more efficiently. They also are grappling with how to cut the costs of protecting the confidential business information EPA collects in the course of regulating chemicals.

Karen Chu, a manager with the program, is facing a challenge at the intersection of tighter federal budgets and greener chemistry.

Chu's boss, Charles M. Auer, director of EPA's Office of Pollution Prevention & Toxics, wants her to cut costs at the agency program that reviews new commercial compounds before they go on the market. And he wants Chu to ensure that the program helps get innovative new chemicals to the market faster.

Auer's boss, James B. Gulliford, EPA assistant administrator for prevention, pesticides, and toxic substances, has made it clear that chemical programs at EPA will make do with dwindling resources. That's because of overall cuts at the agency as laid out in President George W. Bush's proposed federal budget for fiscal 2008. Bush wants to fund EPA's budget at $7.2 billion in 2008, down from the $7.7 billion Congress recently provided to the agency for 2007.

"It isn't about the dollars," Gulliford told attendees at GlobalChem, the chemical industry's March 8-9 annual conference on global chemical regulation where he, Auer, and Chu spoke. "We're about results," Gulliford said, adding that the agency has enough money to implement its programs.

To that end, Chu said at the conference, a number of changes are in store at EPA's New Chemicals Program to cut the costs and the time to review premanufacture notices (PMNs) for novel substances. Under federal law, chemical companies must submit these notices to EPA for review 90 days before they begin manufacturing or importing a new commercial substance into the U.S. The agency uses that time to evaluate the risks posed by the chemical and, if necessary, impose controls, ranging from eye protection for workers to restrictions in the uses of the substance.

As part of EPA's improvements of the review process, the agency is installing new information technology that will allow companies to submit PMNs electronically, instead of on paper, Chu said. This change will significantly boost the efficiency of the New Chemicals Program, she said.

ELECTRONIC SUBMISSIONS of PMNs will cut the agency's overhead costs for protecting proprietary data that companies submit as part of their PMNs. Safeguarding confidential business information on new chemicals is extremely important, Chu noted, and constitutes one of the biggest expenses of the New Chemicals Program.

Another large part of the program's costs, she continued, is the fees that EPA pays to Chemical Abstracts Service to access information on substances. CAS is a division of the American Chemical Society.

The agency's goal, Chu said, is to cut these expenses by eliminating as many unnecessary CAS searches as possible. The number of the agency's CAS searches and the resultant fees are related to the number of PMNs it reviews, she said. Between 2000 and 2004, the agency conducted CAS searches in conjunction with reviews of hundreds of PMNs, Chu added, without providing dollar figures for these costs.

During this five-year period, companies actually manufactured or imported only 56% of the substances covered by the PMNs, she said. This means that 44% of the agency's resources for reviewing new chemicals-not just CAS fees but also personnel and other costs-were spent on compounds that have never been introduced into commerce.

EPA wants to understand why chemical companies would go through the extensive PMN process and then not introduce a substance, she said. The agency wants to work with companies to achieve a higher rate, possibly 75%, of introducing to the market chemicals that complete premanufacture review, she said.

Chu also said EPA is concerned about its delays in completing reviews of PMNs. The biggest reason for these holdups, she said, is that a firm will repeatedly make changes to a PMN after the agency begins its review, usually due to reengineering of the manufacturing process. Each change forces the agency to conduct a new assessment of exposure to the chemical and to recalculate potential risk posed by the chemical. "This is causing us to backlog," she added.

EPA is considering regulatory changes to address this problem, she said. One possibility under consideration is to allow a company to change its PMN once, according to Chu. Under this scenario, a firm having to change the notice more than once would have to resubmit the document and pay the PMN filing fee again.

Finally, Chu said, EPA is encouraging companies to describe the positive attributes of new chemicals in their PMNs. These properties could include low toxicity, high efficacy, or the ability to reduce use of energy or materials in processes or products requiring the substance. Companies are producing a lot of innovative new chemicals, she said, but their greener traits are generally not described in PMNs.

EPA's goal is to start accepting electronic PMNs in 2008, Auer told the conference. He urged chemical producers to switch to electronic submissions as soon as they "feel comfortable" with the new format.

Chu said EPA will hold a public meeting later this year to hash out ideas about boosting the efficiency of the New Chemicals Program.

TSCA allows chemical producers to claim confidentiality for the name of a substance, its CAS number, and the company's name. EPA is obliged to protect this information unless it challenges the confidentiality claims or until a company tells the agency it no longer considers the data proprietary.

Of the roughly 80,000 entries on the TSCA inventory of chemicals that are, or have been, on the U.S. market, the identity of about 16,000 substances are claimed as confidential.

EPA RECEIVES about 1 million pages of data a year that companies claim as confidential under TSCA, said Scott Sherlock, an attorney adviser assigned to EPA's Office of Pollution Prevention & Toxics.

The agency is studying how it can revisit old filings and, without undue burden on EPA or companies, determine whether the information claimed as confidential still requires such protection, Sherlock said.

In some cases, companies have decided that the data they claimed as confidential years ago can now be made public, Sherlock said. They can release the information simply by amending their initial PMN or their substantial risk notice, or by testing data submissions, he said.

Representatives of large and small chemical makers told the conference attendees that protection of their proprietary data, even for products that have been on the market for years, remains extremely important for competitive reasons.

When asked whether EPA has inadvertently disclosed TSCA confidential business information, Sherlock said the agency "very rarely" has done so.

A far more common security problem, he said, is that companies file their proprietary information through EPA's regular e-mail rather than through the agency's secure system for accepting electronic submissions.

more on this topic

Chemical Regulation
EPA updates list of chemicals used in the US
Policy
EPA on track to finalize TSCA rules
Policy
Tensions build as U.S. chemical law turns one year old
Share X
To send an e-mail to multiple recipients, separate e-mail addresses with a comma, semicolon, or both.
Title: Tight Budget For Chemical Controls
Author: Cheryl Hogue
Chemical & Engineering News will not share your email address with any other person or company.