Take Note
[+]Enlarge
Credit: Invensys
Drugmakers say the paper-based control schemes developed in the lab may no longer be accepted in manufacturing. 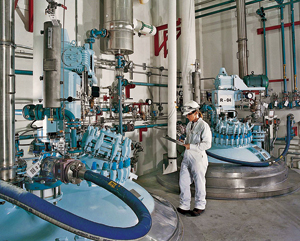 Credit: Invensys
Drugmakers say the paper-based control schemes developed in the lab may no longer be accepted in manufacturing.

THE PHARMACEUTICAL industry, responding to a simultaneous push from the market and pull from regulators, is taking tentative first steps toward the state of the art in automated manufacturing control and analysis.

The steps are a response to investor calls for cost control and to a new program from the Food & Drug Administration that eases the regulatory burden of making changes to validated manufacturing systems. According to managers at both drug and control systems companies, these steps are taking the industry away from a labor- and paperwork-intensive production regime toward a more streamlined world in which data analysis and process development are integrated from drug discovery to product launch.

The industry has a long way to go, however. Much of the current activity at pharmaceutical plants is characterized by batch manufacturing processes that are not as easy to automate as continuous operations. While vendors agree that drugmakers are embracing new technology in a wave of redesigns and plant restructurings, they claim that much of the technology is new only to drugmakers. Similar systems have been in place for years in specialty and commodity chemical plants.

"The traditional pharmaceutical approach," according to Kip Spencer, a business development consultant for life sciences at process automation company ABB, "is to predefine processes, record-keeping, and audit trails and to lock everything down. Once you start production, you don't make any changes, because if you do, you have to revalidate the system."

"Now, FDA says, 'Look, if you use a scientific approach to this, we are not going to penalize you,' " Spencer says. " 'We want you to improve the quality of products and improve the overall efficiency.' "

The PAT program hinges on better use of data to make adjustments online. "The more you learn about processes, the more likely you can make improvements," he says. Instead of analyzing samples at the end of the run and throwing out product that does not meet specifications, manufacturers are encouraged under the FDA program to use instruments that gauge quality during the production run and make adjustments that head off waste.

James Huff, director of marketing for pharmaceuticals at plant automation supplier Invensys, says this approach is forcing manufacturing process engineers to work more closely with chemists in drug discovery and development. "R&D does a lot of simulation and control," he says. "People are taking advantage of technologies used in R&D to get back into process improvements. R&D is where all the processes started, and as they ramp into manufacturing and full-scale production, people are getting back in touch with the processes they originally designed."

DEMAND is therefore increasing for sensors and analytical equipment that can be used in conjunction with digital control systems (DCS) and other automation tools. "But I think the change is still relatively slow," says Frank Offenbacher, marketing manager for the life sciences division of Honeywell Process Solutions, another automation vendor. "The industry is ultraconservative to begin with. And when FDA first came out with the PAT initiative, a lot of companies jumped at the analytical part of it and went after sensor technology. One company told me they were buying one of every type of sensor and trying it out in R&D applications."

In the past two years, however, Offenbacher says, drugmakers have been advancing beyond simply measuring processes to using sensors and analytical techniques to better understand and control the process. "Recently, we have seen companies—though they are not dramatically changing their strategies yet—implementing sensor technology and process control and looking at modeling and data acquisition analysis and multivariable control applications for their processes," he says.

Honeywell's life sciences group, Offenbacher adds, is experiencing "double-digit" revenue growth. He attributes the growth partly to drug companies' increased interest in advanced controls such as his company's Experion DCS, which is configured with manufacturing execution software for connecting plant systems to business systems and to data historian software. He attributes some of the growth to the fact that Honeywell began a focused marketing effort in the pharmaceutical industry just seven years ago and is gaining market share as it becomes a better known player in that arena.

ABB also claims it is achieving double-digit growth and has similarly focused more of its efforts on the drug sector. It opened a center of excellence for system development in Cork, Ireland, this year.

Invensys, meanwhile, saw growth in the pharmaceutical sector jump from about 5% two years ago to nearly 30% last year with the introduction of Infusion, a DCS platform designed to incorporate currently installed controls and analytics from any vendor, according to Huff. "It allows us to pull together systems that already exist in the plant in order to drive the kind of efficiencies you look for in manufacturing," he says. "Most discussions we have with people today aren't about how to automate processes. Pharmaceutical companies are looking to get more value out of their process. They are looking at how to drive efficiencies."

Adam Lalonde, senior manager of global manufacturing at Pfizer, agrees that FDA's promotion of a more flexible means of validating plants under cGMP standards has prompted drug companies to make efficiency changes. So has increased competition: The threat of losing manufacturing to outsourcing companies and overseas manufacturers has motivated plant staff to be more rigorous on costs, he says.

HE EXPLAINS that the drug companies' pilot-plant and kilo-lab operations are typically managed by chemists. "Flexibility means everything to them, and the most flexible system in the world is a paper system. Therefore, they would tend not to automate any of the pilot plants or kilo labs." Automated analytical and control systems are now being introduced, he says, in an effort to create continuity between research and manufacturing and to expedite technology transfer. "Now our late-stage research processes are starting to look a little more like larger scale manufacturing," Lalonde says.

Pfizer has launched a program called Catalyst by which it is attempting to integrate manufacturing automation, data analysis, and batch review functions into a comprehensive process scheme. "We want to create an environment where there is just one definition of the process that everybody is sharing," Lalonde says.

He admits that the pharmaceutical industry has held off on installing much of the advanced control system technology developed over the past 10 years and already implemented by other industries, yet Catalyst illustrates the extent to which it might be the vendors that need to do some catching up. While Pfizer policy on software is to use commercially available products wherever possible, it has had to develop its own software to integrate control systems manufactured by Emerson Process Management, Honeywell, ABB, and others, Lalonde says.

Automation system vendors do seem to be making moves that will allow Pfizer to stick to its software policy. Lalonde says the company is currently evaluating Invensys' Infusion system integration product in pilot installations.