Once overlooked, individuals with disabilities find advocates in the field of chemistry 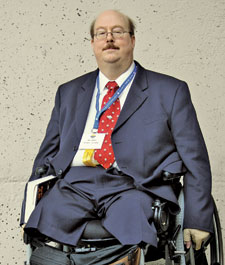 JOSEPH PRIESTLEY, the chemist who discovered oxygen, had a speech impediment. William H. Wollaston, who discovered rhodium and palladium, was visually impaired. And Sir John W. Cornforth, who received the 1975 Nobel Prize in Chemistry for his work on the stereochemistry of enzymatic processes, was deaf.

"People are surprised to discover that a lot of the people who are very well-known in this profession overcame a disability," says James M. Landis, chair of the American Chemical Society Committee on Chemists with Disabilities (CWD) and a senior research scientist at Henkel.

Landis, who lost both his legs and is in a wheelchair, works with 13 other members of CWD to raise awareness about the contributions of individuals with disabilities to the field of chemistry.

The committee's mission is to promote opportunities, both educational and professional, for people with disabilities who are interested in pursuing careers in chemistry and in fields requiring the knowledge of chemistry. The committee also strives to demonstrate the capabilities of these individuals to educators, employers, and peers.

"There's a benefit to ACS and to the profession to be able to tap into a group of people that could contribute but generally have been overlooked in the past," Landis says. "The intent of the committee is to act as an advocate for chemists with disabilities in the profession."

One challenge the committee faces is tracking the number of ACS members who have disabilities, because some people don't report them.

Another hurdle is dealing with a misperception among some in the chemistry community that people with disabilities cannot work successfully in a laboratory environment. "Part of our goal is to ensure that this perception is corrected," he says. In another article in this issue (see page 36), several blind chemists explore ways to provide blind students studying chemistry with a rich, challenging experience.

CWD offers travel awards of up to $2,500 for students and postdoctoral researchers to attend scientific meetings. Individuals with disabilities often have higher travel and lodging expenses, Landis explains, noting that they may have to pay for a taxi when public transportation is impractical, for example. These awards are a way to level the playing field, making it easier for disabled chemists to attend these meetings, he says.

In addition, the committee recently launched its Ambassadors Program, which provides speakers and information about chemists with disabilities to ACS local sections, community groups, and schools.

CWD got its start in 1980 as the Board Committee on the Handicapped (COH) after a group of 10 disabled chemists in ACS formed an ad hoc committee. In May 1991, the committee changed its name to CWD, and in 2005, the committee celebrated its 25th anniversary.

Last year, the committee requested a change in status from an "other committee of the board" to a joint board-council committee. The elevated status will give the committee more visibility and increased support from the ACS Council, Landis says. This request will be up for consideration by the Committee on Committees during the fall ACS national meeting in Boston.

Anthony Scurry, ACS staff liaison to CWD and manager of diversity programs, says that one of his goals is to help the committee to begin developing its own programs at the national meetings. "I would like for CWD to find programs that they can call their own," Scurry says.

These programs may help to further convey the message that a disability isn't always obvious and that it's important to keep an open mind.

Comment
Supporting students and chemists with disabilities
Environment
Supporting chemists with disabilities benefits us all
Careers
Disability travel award now available
Share X
To send an e-mail to multiple recipients, separate e-mail addresses with a comma, semicolon, or both.
Title: Chemists With Disabilities
Author: Linda Wang
Chemical & Engineering News will not share your email address with any other person or company.