Getting down to the nitty-gritty of the ubiquitous abrasive 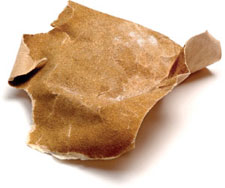 I 'M NO CARPENTER. In fact, my experience with sandpaper is limited to a sixth-grade woodworking class when I made a toolbox for my dad for Father's Day. Being a perfectionist, I spent hours smoothing the wooden sides, but at the time I didn't fathom the extensive science that goes into making sandpaper.

Many consumer products owe their flawless finish to sandpaper. Technically referred to as a coated abrasive, sandpaper is used during the manufacturing of everything from aluminum baseball bats to orthopedic implants.

In the 13th century, the Chinese created some of the earliest forms of sandpaper by crushing seashells and bonding them to parchment paper using natural gums. By contrast, modern sandpaper production is a highly sophisticated process.

"From a layman's perspective, you might think that you just sprinkle little rocks on a backing, but there's a lot of science behind sandpaper," says Stefan A. Babirad, technical director at 3M Abrasives Systems Division. To design sandpaper, researchers must consider the chemical properties of the abrasive material and the adhesive, which is then attached to a backing made of paper, cloth, or polymeric materials.

The abrasive can be a natural mineral such as garnet or emery or a synthetic material such as fused aluminum oxide or silicon carbide. Synthetic abrasives are much harder and tougher than natural minerals and have emerged in the 20th century as the material of choice for the industry, Babirad says.

But choosing an abrasive can be a tricky task. Many materials out there could be used as abrasives but they can chemically react with the material being sanded or they're very expensive, says Anthony C. Gaeta, a research scientist at Saint-Gobain Abrasives. For example, boron carbide is very hard and doesn't wear easily, but it makes a poor abrasive because it can react with many metals.

The shape and size of the abrasive's grit can affect the performance of the sandpaper. Grains of grit that are long and narrow, and standing straight up like tiny pencils, provide a better cut than do cube-shaped particles. This is because the narrow grits are sharper than the block-shaped ones.

Grit can be as tiny as 1-µm thick, about the size of pollen, or as broad as a 2-mm pebble. Abrasive is deposited on the adhesive-coated backing using either gravity or an electrostatic process in which particles are passed through an electric field and oriented on the backing, sharp side up.

NEXT COME the adhesives. For most do-it-yourself sanding applications, adhesives can be animal-hide-derived glues, while stronger polymeric bonding agents such as urea formaldehyde, acrylic, and epoxy resins are used for more aggressive sanding. Phenolic resins are the adhesive heavyweight champions because they can withstand the high temperatures and frictional forces generated during heavy-duty industrial sanding.

Producing effective sandpaper involves matching a good abrasive with a good adhesive. "You can put this really great abrasive on, but if the resin is not strong enough, then you'll never be able to fully utilize the potential of that abrasive," Gaeta explains. Ultimately, the choice of the abrasive and adhesive depends on the harshness of the application. Aluminum oxide and a urea formaldehyde resin work just fine for a woodworking application but might not hold up for a metal-finishing job.

The type of backing also can affect performance. For example, for automotive applications, such as microfinishing an engine, cloth and paper backing cause inconsistent scratches, Babirad says. A flexible polyester film backing will do a better, smoother job, he adds.

The science of sanding doesn't just stop here. Because sanding generates a lot of heat, chemical reactions can sometimes take place between the abrasive and the material being honed down, particularly metals. Gaeta notes that adding inorganic additives such as sodium aluminum fluoride helps reduce friction. Other additives, such as zinc stearate, can prevent the material being sanded from clogging the sandpaper.

Nowadays, computer programs can model how an abrasive will perform in a variety of applications. That kind of information used to be available only through empirical testing, says Ronald E. Barks, an independent consultant and director of R&D for Norton Abrasives between 1974 and 1988. Abrasive makers simply tested an abrasive's performance and compared it to its microstructure under an electron microscope.

With the development of stronger materials for making things, there's a corresponding need for stronger abrasives that can sand them down. For example, aerospace manufacturers deposit coatings nearly as hard as diamond on aircraft landing gear to prevent corrosion. Both 3M and Saint-Gobain have engineered abrasives that contain either diamond or cubic boron nitride as the abrasive material to finish these tough coatings.

In addition, some materials are becoming increasingly expensive, which is driving the production of abrasives with finer grit sizes. "Manufacturers don't want to grind off material they pay a lot of money for. If they cast a jet turbine blade for an engine, they make almost the perfect shape and size they need, and the part just needs to be cleaned off," Gaeta notes. "If manufacturers could eliminate the need for abrasives, they would." But often—from high-end machining to my simple toolbox—there's just no alternative to sandpaper.