Blind chemistry students get a taste of independence in the lab 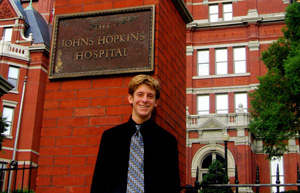 Kurt Herzer, a premed student at Johns Hopkins University, has a genetic disorder that's made him legally blind. People and objects are in focus only when they are close to his face—even when he has glasses on. Though his vision is limited, his needs are very different from the needs of individuals who are completely blind, Herzer says, and professors and academic advisers don't always understand that.

Professors who teach blind and visually impaired students "sometimes assume they know what the students need instead of asking them what they need. Or they assume they know what the students can achieve based on their assumptions about the students' special situation," says Provi Mayo, who will become an assistant chemistry professor at Indiana University-Purdue University, Fort Wayne, in August. Mayo is gathering insights from professors who have taught such students so she can better understand the students' experiences and improve science course materials for them.

Online Information For The Blind Or Visually Impaired

One of the most important messages is that not all students are alike. For example, the age at which a person became blind or visually impaired can affect how they learn. Someone who has been blind since birth will not be able to imagine colors or recall the appearance of a familiar object the way that a person who became blind later in life can. Even sighted students differ in how they learn most effectively, experts point out, and professors who understand these differences will be better at tailoring the education to the student.

The student must be a partner in that tailoring process, however. "I've always wanted to make a pair of glasses and hand them to someone and say, 'This is how I see; put these on,' " Herzer says. "You have to listen to me as the guide in terms of what would help me. Don't just provide things that are not going to be effective." He recalls that he was once given a hand telescope in class and instructed to use it to see the blackboard. Herzer says the narrow field of view was useless in helping him take notes efficiently. On the other hand, he says, the Office of Institutional Equity & Academic Advising at Johns Hopkins has provided him with notetakers for many of his classes, which he has found extremely helpful. The office even involved him in selecting the notetakers.

Herzer says his disability has become a driving force in his education. "It would be marvelous to actually see what someone else sees, just for a day," he says. "But at the same time, so much of what I haven't seen has really contributed to my personality." He explains that there is a curious inspiration in not being able to see certain things but instead imagining what they could be like. "My research is related to quality and patient safety in health care, and much of the work I have been involved in has benefited from creative thinking and exploring the possibilities," he says. Herzer has a 3.90 grade-point average and has been involved in a clinical research elective in the operating rooms at Johns Hopkins Hospital for the past two years. His goal is to be a physician-scientist.

"If you do your best and appreciate every step of the journey, you're not going to fail," he says. "But if you don't become your own advocate and take a leadership role in making sure that your education is what it needs to be to meet your goals and dreams, you'll be missing a world of endless possibility."

More on this Topic

Awards
Ruth Woodall wins Parsons Award
Employment
Jen Heemstra on why it’s important to give and invite feedback
Career Tips
Finding a mentor
Share X
To send an e-mail to multiple recipients, separate e-mail addresses with a comma, semicolon, or both.
Title: Teaching The Blind And Visually Impaired Is Not A One-Size-Fits-All Endeavor
Author: Linda Wang
Chemical & Engineering News will not share your email address with any other person or company.