Linde's acquisition of BOC bolsters other companies; outlook is positive 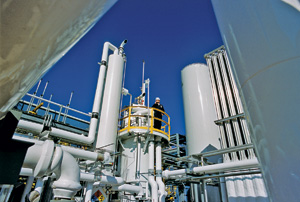 It has been quite an expansive year for industrial gas producers. Linde acquired British gases firm BOC; Air Liquide bought Lurgi, a German engineering company; Air Products & Chemicals and Praxair have added to their portfolios; and even Airgas, the smallest of these firms, has boosted its capacity. In addition, industry watchers are placing bullish bets on the sector.

"I see a rosy outlook compared with other parts of the chemical industry," says Roger Shamel, president of Lexington, Mass.-based Consulting Resources, of the industrial gas industry.

One of the chief reasons for the activity, according to industry observers, is the scope of customers that use gases. They represent a broad slate of industries including electronics, energy, chemicals, metals, health care, aerospace, and food and beverages. In fact, it has been said that gases are used in more industries than any other chemical product.

It was Linde's acquisition of BOC that sparked many of the changes in the industrial gas industry. Government regulators made the German company sell off parts of its portfolio because of antitrust issues.

One of the first of these divestments was Linde's sale of its industrial and medical gases business in Mexico to Praxair. The unit, which Linde acquired in 1999 with its purchase of Swedish gas producer AGA, had sales of about $75 million in 2006.

But there were bigger deals. France's Air Liquide bought out Linde's interest in four joint-venture companies managed by the two firms in Southeast Asia. It now owns 100% of three of the companies, located in Thailand, Vietnam, and Singapore. The fourth, in Brunei, is owned with a local partner. At the same time, Air Liquide sold its interest in Malaysian Oxygen and Hong Kong Oxygen to Linde. Proceeds to Linde for the deals were a net $362 million.

Air Liquide called the acquisitions a major step in its strategy "to pursue its development in Southeast Asia in a quicker and more integrated way and to capitalize on growth in economies clustered around the industrial hub of Singapore."

Outside of what it bought from Linde, Air Liquide scored on its own by buying not an industrial gas company but the German engineering firm Lurgi for $276 million. The acquisition strengthened the French company in hydrogen markets and gave it access to the coal-to-liquids and coal-to-chemicals sectors, which use oxygen and steam to gasify the coal.

In April, Air Products bought Linde's Polish industrial gas unit BOC Gazy for about $503 million. John E. McGlade, Air Products' chief operating officer, said, "We now have the assets, infrastructure, people, and management talent to take full advantage of the opportunities that come from having the leading position in one of the world's fastest growing economies."

A much smaller gas producer also benefited from the sale of the various Linde units. In March, Airgas, the largest U.S. supplier of packaged gas&gases sold in cylinders, such as those seen in welding shops&completed the purchase of eight air separation plants from Linde for $495 million.

Security analysts liked the Airgas acquisitions. Banc of America Securities' Kevin W. McCarthy told clients that the air separation units Airgas bought from Linde had earnings before taxes that were 24.0% of sales, more than double the 10.7% for all of Airgas in fiscal 2007.

In fact, security analysts and consultants seem to like the industrial gas business in general. Standard & Poor's has said that consumption of industrial gases over the longer term will continue to increase at the historical rate of 1.5 to 2 times that of industrial production.

Consulting Resources' Shamel says global industrial gas growth is going to continue to beat that of gross domestic product. "Worldwide GDP growth is probably about 3% per year," he says. "Gases are growing close to 4-5% per year, with nitrogen having faster growth than oxygen, largely due to nitrogen demand in the electronics industry."

If results continue to grow as they did in the April-to-June quarter, it will indeed be a rosy future. At Air Products, sales of merchant gases increased 17% over the same period in 2006 to $817 million, and tonnage gas sales rose 27% to $695 million. Tonnage, or on-site, gas is produced at the customer's location in a plant owned by the industrial gas supplier.

Praxair figures indicate that its gas sales worldwide rose 12.9% from second-quarter 2006 to $2.20 billion.

Companies, at least those based in the U.S., are not resting. Air Products' chief financial officer, Paul E. Huck, told stock analysts in July that the company will bring seven plants onstream by the end of 2008, including a second hydrogen plant for Petro-Canada's refinery in Edmonton, Alberta, and a large nitrogen facility for enhanced oil recovery for Mexico's Pemex. The firm also is currently working on "about 20 new tonnage opportunities in North America, Europe, Latin America, and the Middle East," he said.

Praxair CFO James S. Sawyer told analysts around the same time that Brazil, China, India, and Mexico, "all countries in which Praxair has a leading position," are growing rapidly. "This growth," he said, "requires foreign investment for infrastructure advancement. We continue to see robust proposal activity related to new production plants, as well as expansions of existing manufacturing facilities."

Capital costs???the cost of building new plants and expanding existing facilities???are no small item for industrial gas producers. Although labor costs are relatively low and the raw materials are free, capital spending is high. C&EN reported in its annual Facts & Figures issue this year (C&EN, July 2, page 34) that capital expenditures as a percentage of sales for Air Products and Praxair were 14.3% and 13.2%, respectively. This is more than 3.5 times the aggregate ratio for the chemical companies surveyed, excluding the two industrial gas producers.

According to Shamel, capital is the number one consideration for industrial gas producers. And he notes that one thing that management has done well is to manage capital spending and plant construction so the sector does not go through the capacity swings that have been a problem in many other parts of the chemical industry.

Consolidation over the past decade to the point that there are now just four major producers worldwide has also provided companies with discipline in building new plants and in pricing their products profitably, Shamel says.

Besides consolidation, there is one other area that Shamel sees as crucial to the success of the industrial gas industry—R&D. "One reason the industry is doing well," he says, "is the reinvestment of some of their profits in R&D and working with their customers to develop new applications."

There is a long history for this type of market condition. Steel is probably the best example for the air separation companies, according to Shamel. "They went to the steel industry, studied its properties, and said, 'You know, you could make steel better if you used oxygen.' That attitude has kept the industry growing," he says. "And they continue to do that in health care and electronics.

"The efforts of management to get out and lead their customers to new uses is probably the single most important factor that has led the gas industry to being among the stars of the chemical industry," Shamel adds.